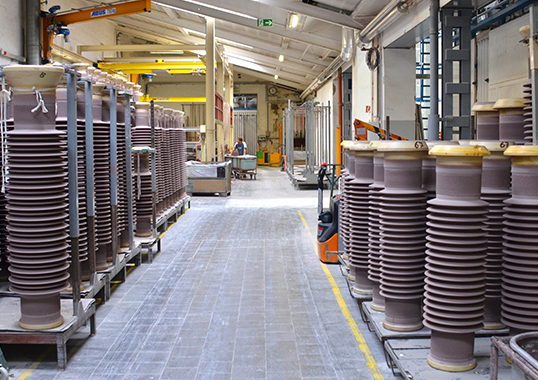 One would have to think hard to find anything that was leading edge technology more than a century ago and today still widely considered state-of-the-art. Glazed electrical porcelain is such a product. Yet while looking much like what was crafted by hand decades ago, the porcelain insulators produced today share little in common with their relatively crude ‘ancestors’. Constant refinements in composition, processing and testing have made modern porcelain insulators at HV substations impressive by any standard. In spite of inroads by more technologically advanced alternatives, this remarkable durable material has succeeded in remaining the dominant insulator technology applied at substations the world over. 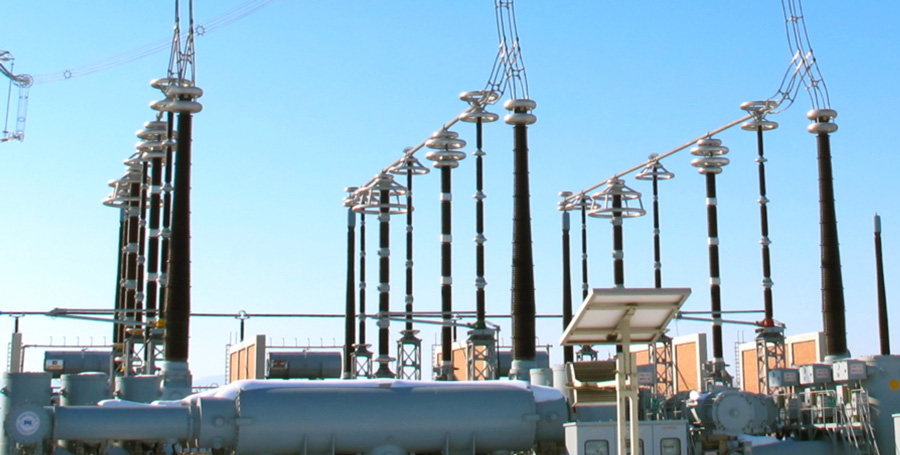 Electrical porcelain has a rich history going back to the time when small-scale pottery firms first began making telegraph insulators. These were crude, threadless pieces – produced in small volume compared to alternatives made from glass, which were cheaper and also regarded as superior.

As electrical distribution began to develop in the 1880s, larger and better quality insulators were needed to carry the voltages of overhead power lines. Industry pioneers worldwide began to experiment with different mixtures of clay that would yield insulators with better electrical as well as mechanical performance. Soon, porcelain began to replace glass for most distribution applications due to perceived superior performance in both insulation and strength.

As voltages continued to increase and insulators of growing dimension became necessary, the attributes required of clays became ever more demanding. Focus was increasingly placed on strength as well as on high plasticity and good drying behavior, with minimal presence of undesired organic matter. Other key parameters included fine grain size and low residue content, allowing the porcelain to be shaped into huge pieces without deformation and to be fired with no release of gases that might result in porosity in the body.

Today, the ceramic bodies of porcelain insulators are prepared according to strictly followed recipes which involve a compromise in the relative amounts of different ingredients to meet goals of long service life, ease of production or some optimal combination of low cost with sufficient required performance. For example, a typical formulation for the porcelain mass will contain varying proportions of ball clay, kaolin (for strength and plasticity), feldspar (a flux that helps sintering in the kiln), and fillers such as quartz, alumina or calcined bauxite (intended to impart additional mechanical strength). A variety of secondary materials are also used to facilitate processing including water and additives such as binders – all of which are burned off in the kiln during firing at temperatures from 1200 to 1300°C.

At the same time, growing attention has been placed over the years on ‘microstructure’ of raw materials in order to avoid unwanted microscopic interfaces. In particular, experts believe that quartz crystallites found in some ceramic aggregates may feature critically ‘oversized’ particles that can modify and shrink during firing. Resulting microcracks can then propagate and become areas of inherent weakness in the body during dynamic mechanical loading or even under changes in ambient temperature. The larger the quartz crystallites, the bigger these crack and the sooner the insulator is at risk of failing.

Given the above, methods have emerged in recent years to allow producers as well as buyers to monitor microstructure of the porcelain mass to ensure freedom from crystallites formed during production. Apart from materials testing to measure physical attributes such as density and mechanical strength, structural analysis is done using x-ray diffractometers. These allow the quartz content of different alumina porcelains to be conveniently and easily compared on charts.

The basic production technologies used for porcelain insulators have not changed appreciably for decades, although associated equipment such as ball mills, extruders, lathes, dryers and kilns have been progressively improved or enlarged for higher productivity or reduced energy costs.

The classical wet process is still the more common manufacturing technique and sees the porcelain mass pressed and shaped while having relatively high moisture content. The main advantage is lower investment cost and that that the production environment has much less of the dust caused by turning dry cylinders. The more recently developed isostatic production process, by contrast, requires expensive upstream equipment to mechanically compress the spray-dried ingredients into porcelain cylinders under extremely high pressure. The main benefit is reduced processing lead times, which, in the insulator business, can prove the key decision-making criterion among certain buyers. 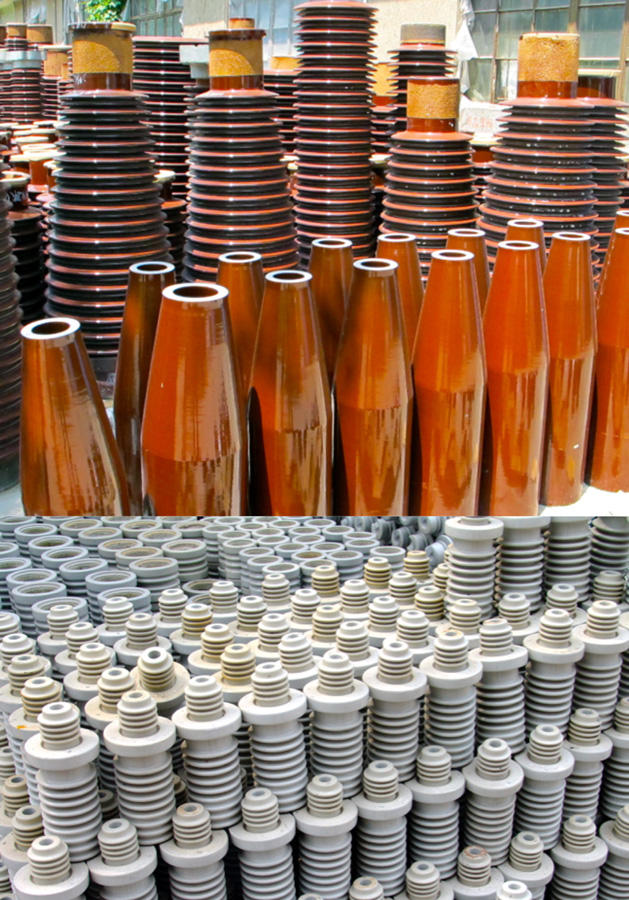 Many in the high voltage industry have come to regard electrical porcelain as a basic commodity. However, the truth is that there is a wide range of different qualities available in the marketplace – many of which might still pass basic test standards. This means that users may need their own criteria and methods to assess and qualify who should be on their preferred ‘short list’ from among hundreds of potential suppliers worldwide. Buying on the basis of price alone is seldom a realistic option. For example, in some applications, such as on distribution lines or for station posts at lower transmission voltages, small surface defects or blemishes to the glaze might have little impact on functionality or long-term service performance. However, for more demanding applications, such as HV wall bushings or breaker housings, even minor defects are considered a source of potential problems and therefore viewed as unacceptable. Here, potential suppliers must be carefully reviewed and regularly monitored to ensure continuous compliance with rigorous quality control procedures.

One of the drawbacks of electrical porcelain production using the classical wet process is relatively long production lead times. These are dictated by a series of relatively labor-intensive steps needed to progressively remove moisture once the ceramic body has been mixed into a homogeneous, watery slurry. Given this limitation, a more modern approach has been developed which sees spray-dried ingredients of the ceramic body compressed under great force into dry cylinders, ready for immediate turning. 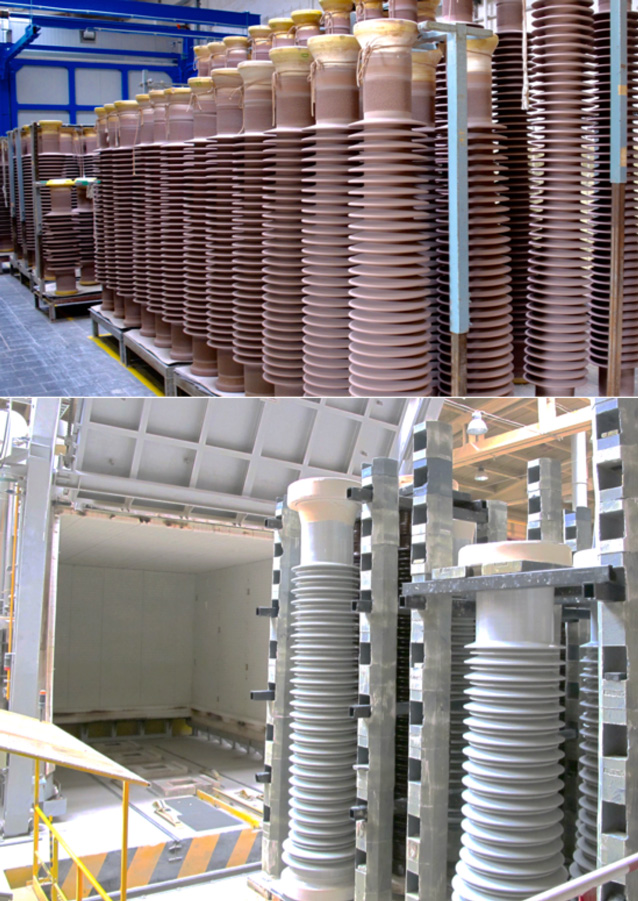