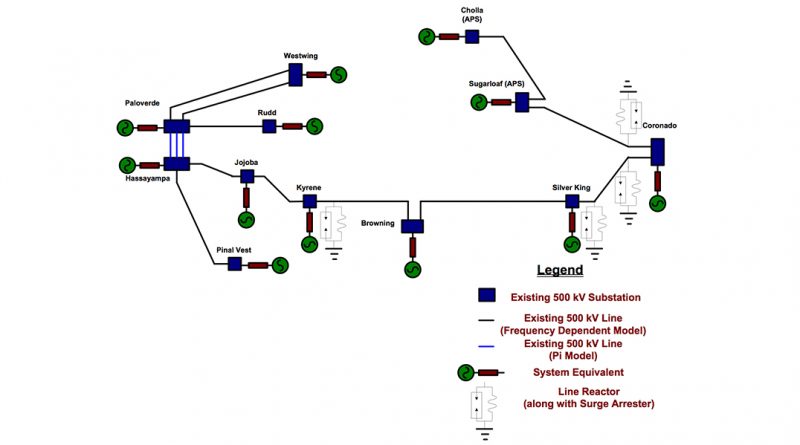 The National Electrical Safety Code (NESC, IEEE C2-2012) specifies horizontal and vertical clearances of unguarded parts and clearance between guard to live parts on EHV power systems (345 kV and higher). Basic clearances are specified, which can then be adjusted based on switching surge factors.

This edited past contribution to INMR by engineers at Salt River Project reviewed switching surge overvoltage studies performed for several 500 kV lines in their system. In cases where line clearances were found inadequate to meet NESC criteria, switching surge factors were reduced by installing 500 kV line arresters at selected locations. The experience proved that installation of transmission line arresters can be an economical approach to reduce switching surge overvoltages at selected line locations.

Switching overvoltages occur because the voltages at the instant of switching in a power system are not the same as final voltages. When a breaker is closed, there will be transition period during which the voltages may overshoot by as much as to levels over 300 percent. Front time of the initial transient can be from a few hundred microseconds to one to two milliseconds. EHV line energization and/or reclosing overvoltages have significant impact on design of a line and of the equipment at terminal stations.

Line switching overvoltage levels along the length of a transmission line are statistical in nature and depend on factors such as the instant of breaker closing on the voltage wave, relative closing times of the various poles, transmission line length, parallel lines in the same right of way, ground path characteristics, etc. When a transmission line is switched open, (trapped) charges remain on the line and slowly decay to zero. Overvoltage levels are normally higher for ‘reclosing’ a line with the trapped charge compared to line ‘energization’ without the trapped charge. Line design is usually based to withstand 98% value.

Line energization is not the only cause of switching surge overvoltages on transmission lines. Other causes include:

Transmission line energization overvoltages cannot easily be calculated by analytical equations. Before computers, these were calculated by Transient Network Analyzers (TNAs). In a TNA study, the power system is physically modeled on a smaller scale. Transmission lines are modeled as distributed inductors and capacitors while generators are modeled as equivalent sources. The breaker, usually modeled by a computer-controlled switch, is repeatedly closed hundreds of times and results are statistically analyzed to compute maximum overvoltages.

TNA studies are now obsolete – replaced by digital computer programs such as Electromagnetic Transient Type Programs (ATP, EMTP, PSCAD/EMTDC. etc.). Fig. 1 shows an overall view of the Salt River Project (SRP) and the adjacent 500 kV transmission system. In order to calculate the switching surge factor for SRP transmission lines, the system bounded by the substations represented in red are modeled, using the PSCAD/EMTDC program. Fig. 2 is a more detailed representation of the boundary substations along with the lines of interest. The system equivalents at the boundary locations are calculated using a short circuit data base. The calculated system equivalent parameters include positive, negative and zero sequence impedances at each boundary bus and between all boundary buses. Lines of interest, where switching surge factors are calculated, are represented by the frequency dependent (phase) model. This line model is a distributed RLC traveling wave model that incorporates frequency dependence of all parameters. The lines not subject to detailed analysis are modeled as coupled Pi-Line sections.

Line clearances for all 500 kV lines were measured using Light Detection and Ranging (LiDAR) technology. An SRP contractor provided this service, in which an aircraft-mounted remote sensing module is used along the power line corridor. Relative distances are measured by illuminating the objects in the corridor with a laser and analyzing reflected light. A 3-D point cloud is interpreted to create a model of the transmission line, topology of terrain, vegetation and structures in the right-of-way. Once the points are classified and the model created, transmission design software can be used to evaluate various scenarios, such as the conductors carrying rated current and heated to maximum operating temperature or conductors displaced laterally by wind of specified force per square foot. The transmission design program then produces a summary of any clearance concerns from the energized wires to ground, to power lines that cross the corridor, buildings, signs, poles, bridges and so on.

The NESC requires that adjustments be made for local conditions such as elevation above mean sea level. It also allows for reduced clearance to ground in a ‘pedestrian only’ area not traversed by large vehicles or riders on horseback. For higher line voltages (generally applicable at 230 kV AC and above), if an engineering study has determined that switching surge factors are lower than default values, certain clearance requirements can be reduced.

Results of switching (reclosing) surge overvoltages for the CO-SI Line are presented in Figs. 4 and 5. The reclosing operations from Coronado are in 60 cycles and from Silver King are in 35 cycles from the line opening times. As explained, switching surge overvoltages are statistical in nature and values shown are 2% values. When the line is switched 100 times, voltages exceed the stated values in 2% of the cases. In these figures, switching surge factors are computed on 550 kV (1 per unit) base values. Original study values were converted from 525 kV base to compare with NESC numbers. In Figs. 4 and 5, target values are based on measured line clearances and the switching surge factor on NESC specifications. The CO-SI 500 kV Line has arresters installed at Coronado and Silver King stations to limit switching overvoltages at line ends. With arresters at line ends only, switching overvoltages exceed target values at several locations along the line. The solution adopted was to install 420 kV rated transmission line arresters (TLAs) at three locations: 60, 108 and 137 miles from Coronado. A study confirmed that installing arresters at these points would limit overvoltages to meet NESC criteria. 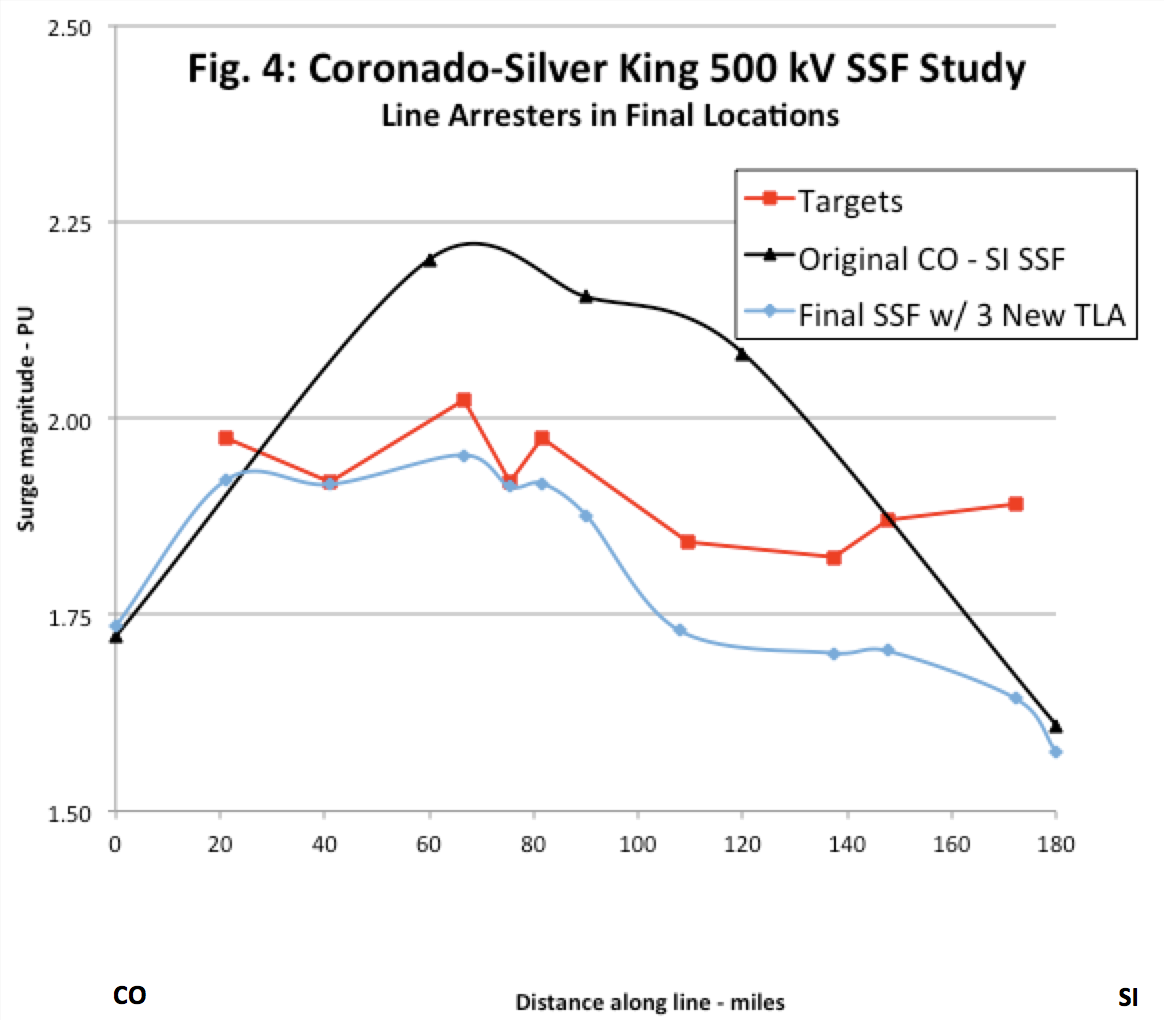 Some iterative fine-tuning was required to select TLA locations that met the criteria. As shown on Fig. 5, in Case 9c, the SSF still exceeded at mile 41 along the line. The adjustment in Case 9d improved the result here, but meant a small excess SSF at mile 66. In Case 9e, the targets are satisfied at all critical locations. 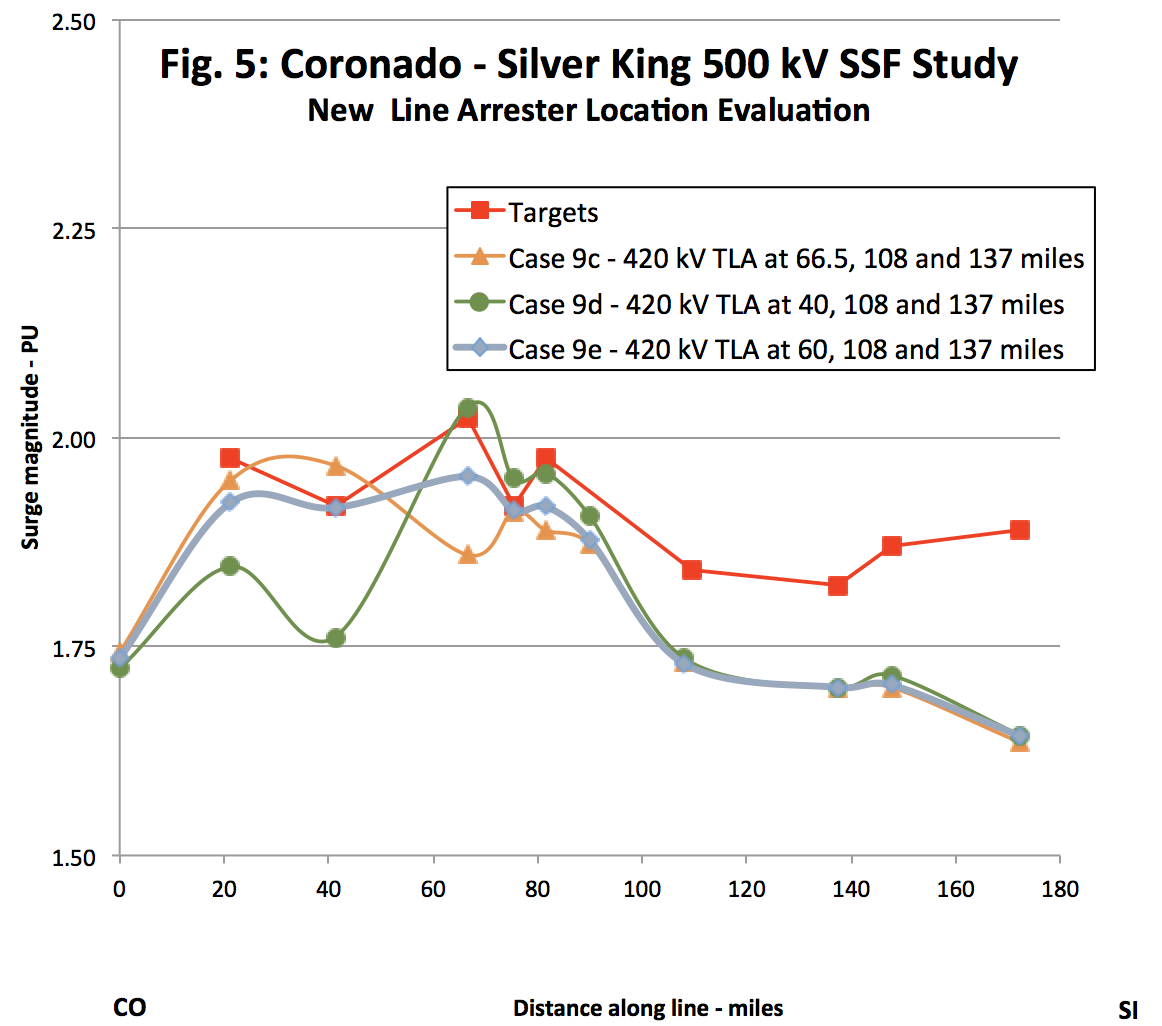 In another sensitivity case, it was shown that all of the Coronado-Silver King criteria would be met with the same TLA locations as Case 9c if the TLAs were rated 396 kV rather than 420 kV. Installing the lower protective level arresters would have reduced the SSF at mile 41 by 0.10 pu. As indicated earlier, SRP prefers the 420 kV rating because the arresters are less likely to be hit by voltage surges that will cause the metal oxide varistor blocks to conduct, which results in a less demanding duty cycle. SSF study results for another SRP transmission line, Coronado-Sugarloaf, are shown in Fig. 6. For this line, the switchings (energizations) are conducted long after opening, without trapped charges. In the pre-TLA case, the SSF calculated at Coronado was pessimistic because of the assumption that an existing line-end reactor, which is protected by arresters, might be switched off. It was found that two TLAs were sufficient to meet target SSF levels for this line, if located at 9 and 25 miles from Coronado. 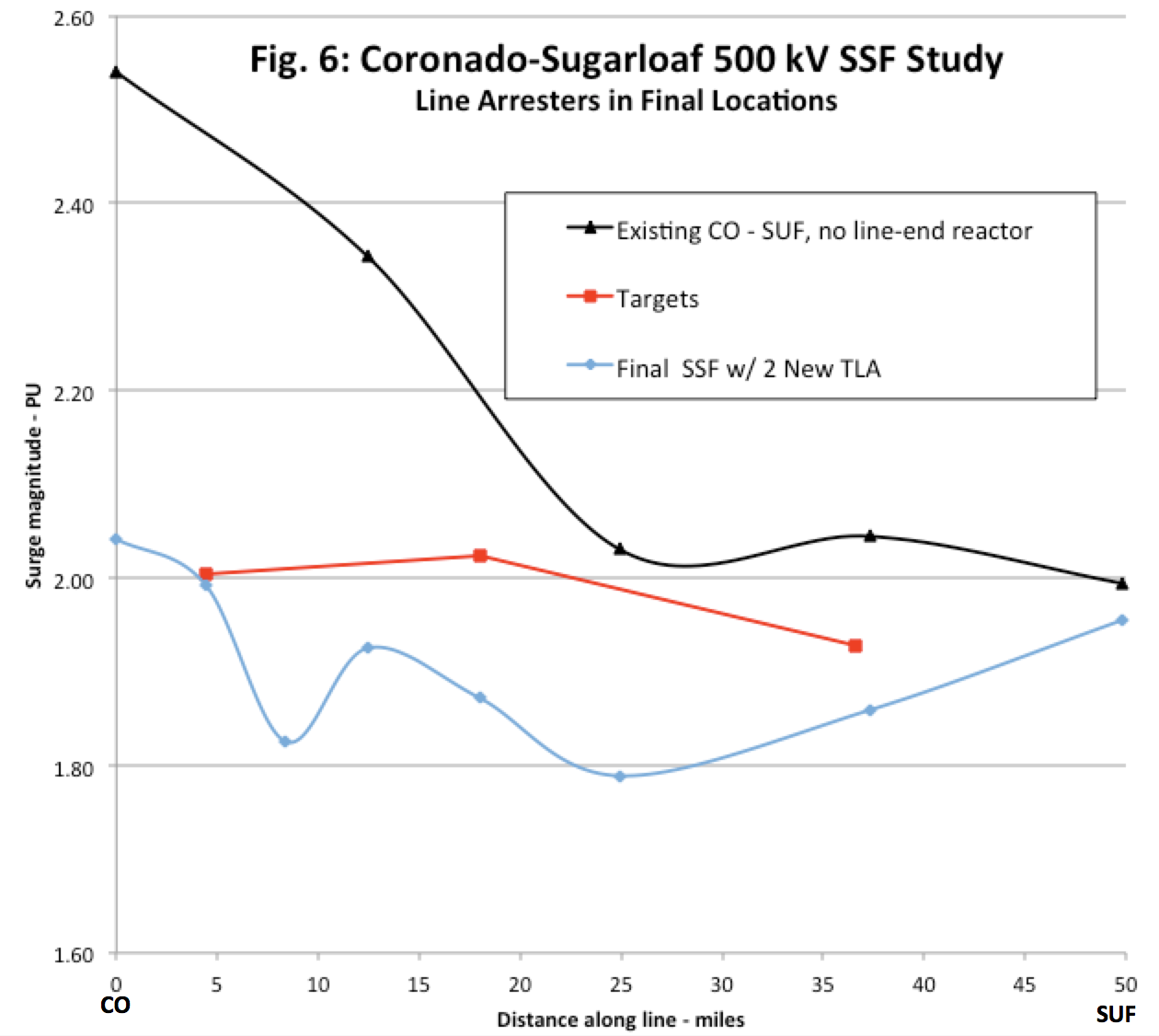 Arrester not stressed with continuous voltage and hence there is freedom to design the arrester voltage.

Insulation coordination not precise and difficult because gap sparkover not precise;

No control of switching overvoltages;

Arrester has to be individually designed for each situation – tower, conductor location;

Salt River Project (SRP) selected gapless metal oxide arresters housed in polymeric housings for installation on selected 500 kV lines at strategic locations, based on extensive switching overvoltage studies. Since line insulation after failure is self-restoring, the line arresters are provided with disconnectors. This facilitates the line being energized immediately in the event of arrester failure without replacing it. Operation of the disconnector makes it easier to identify any failed arrester.

Line energization for switching surge calculation showed that the energy discharged in the line arrester was not significant for a standard station class arrester. However, line energization is only one of many situations that will stress the line arrester and therefore these arresters are conservatively specified with the same energy rating as for a typical station class arrester. SRP specified 420 kV duty cycle rating arresters for its 500 kV system and has had good operating experience. Considering the high reliability required for line arresters, they are specified with 420 kV duty cycle rating. Highlights of TLA specification are as follows:

Vendor shall provide type test data as proof that the arrester meets the energy handling capability specified above.

A crane with an insulated boom, known as a Condor, was used due to the height of the wires. Attachment hardware was simple and consisted of readily available standard items. SRP elected to use armor rod rather than clamping directly to the aluminum outer strands of the conductor. The device lends itself to ‘hot’ installation. Performing work with the line energized simplified the process greatly, since 500 kV line outages are challenging to arrange. At one location, arrester condition monitors were installed, mounted on the lattice tower in series with the ground lead. Files can be downloaded via a wireless USB communications device and this will provide intelligence regarding arrester functionality as well as the number of surges seen by each arrester. 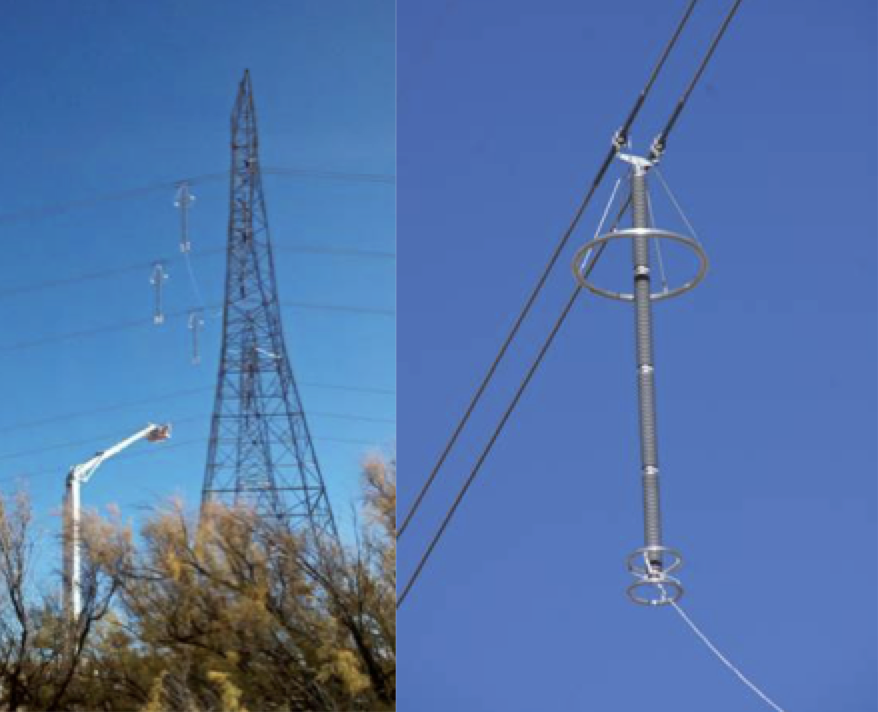 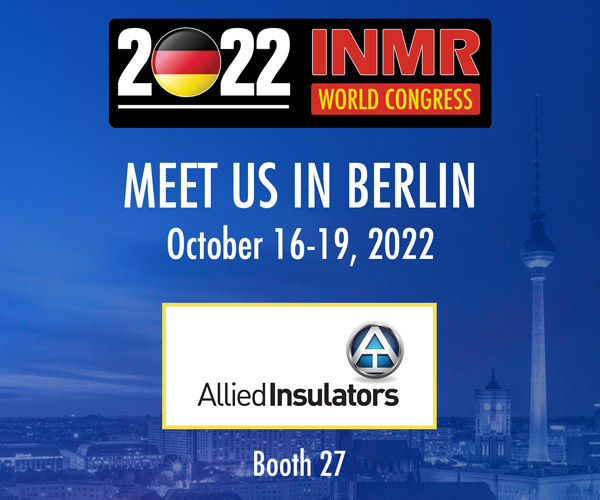 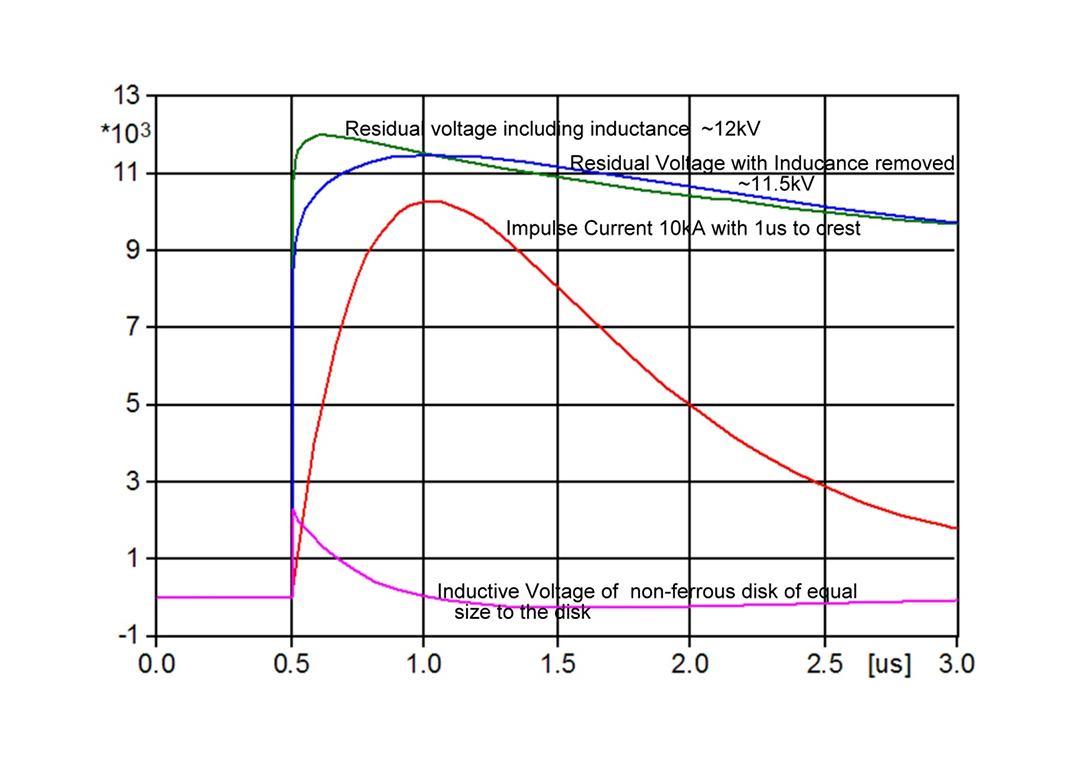 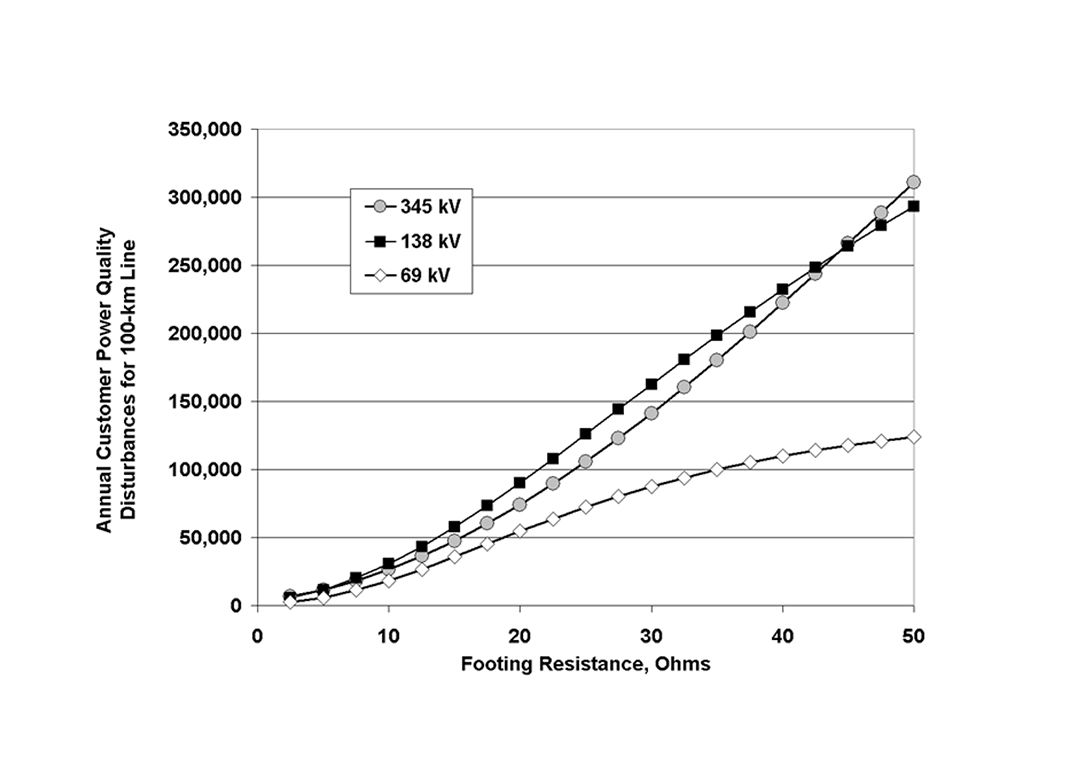 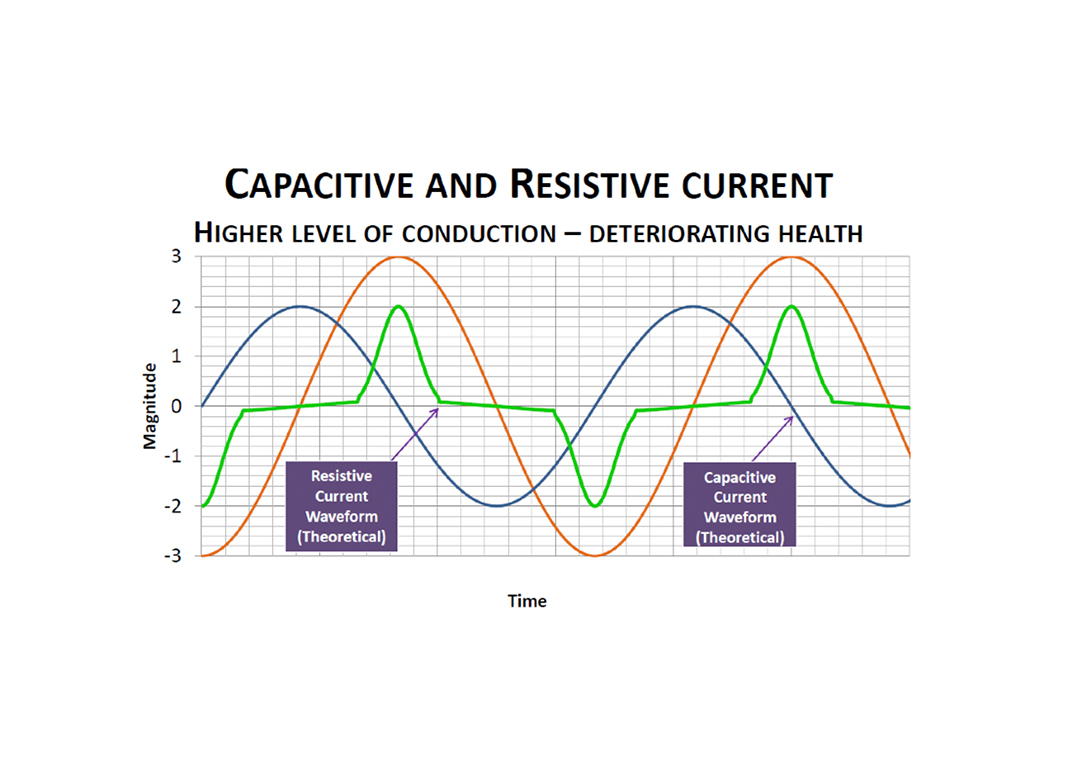