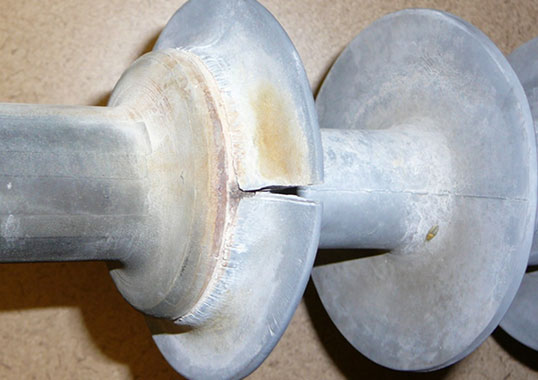 Over the past 10 to 15 years, utilities in the United States and elsewhere experienced increasing failures of polymeric insulator on 115 and 138 kV transmission lines. Investigation showed that these failures could often be attributed to high electric field (E-field) occurring near or on the high-voltage end fittings. Such findings suggested that it was necessary to consider application of corona (grading) rings) on polymeric line insulators even at system voltage below 161 kV. This edited INMR article from 2013, contributed by Andrew Phillips and Chris Engelbrecht of EPRI, offered an overview of insulator failures and proposed strategies to manage the problem.

EPRI was one of the first research organizations to determine that high E-field and resulting discharge activity was an important contributor to premature ageing of polymeric insulators. Based on results from the multi-stress ageing chamber and other testing at the laboratory in Lenox, Massachusetts, this was identified as a primary ageing mechanism on 230 kV and 500 kV insulators. Appropriate E-field limits were subsequently established. More recently, insulator failures at 115 and 138 kV suggest that the same phenomenon may be present at lower system voltages as well.

Ageing of insulator sections subjected to local high electric field is usually the result of stresses associated with one or more of the following types of discharge activity:

On hydrophobic insulators individual drops or relatively limited water patches can enhance localized E-field by a factor of up to 12 due to the high permittivity of water (εr = 80). In the high E-field regions of the insulator, this enhancement could result in corona activity from the edge of the water. Research suggests that it is unlikely that water drop corona alone will result in significant degradation of the polymeric housing since temperature increase due to this type of corona is minimal. There is, however, ample evidence that the chemical by-products of corona – together with moisture – can result in serious material degradation. In this respect, formation of nitric acid is considered important. For example, it has been found that the pH on the surface of an insulator drops from an initial value of about 7 to 3.4 after only about 15 minutes of corona activity on a wet insulator surface. Moreover, it has been found that some formulations of silicone rubber can be particularly vulnerable to deterioration when exposed to nitric acid.

Available evidence suggests that water drop corona can be just the initial phase of the following, more severe, degradation mechanism that affects long-term insulator performance. Present understanding of this process is as follows:

2. Under wetting conditions, patches of surface water form in regions of lower hydrophobicity and are separated by dry regions or ‘bands’.

4. The energy and temperature of these localized arcs are significantly higher than that of water drop corona, further stressing the rubber.

5. With time, as affected regions lose hydrophobicity and completely wet out, E-field in the adjacent regions is enhanced above the water drop corona onset threshold under wetting conditions.

7. The by-products formed by corona in combination with water, notably nitric acid, can be aggressive on the housing, resulting in cracks or corrosion of end fittings.

During wetting conditions, the surface of hydrophilic composite insulators, such as EPDM, is more likely to become covered with patches of water rather than distinct droplets. Dry regions separate these patches and, due to E-field enhancement, sparking can occur between patches. These discharges contain more energy than corona and could degrade the rubber. Although such activity can also occur away from the high E-field region, casual observation during ageing tests suggests that it is more prevalent in regions with high E-field.

Sufficiently high E-field magnitudes can lead to discharge activity within any internal defects, e.g. voids, inclusions ot poor bonding between sheath and core. This, in turn, could eventually lead to insulator failure either by destruction of the rod from discharge activity or by ‘flashunder’ (see Fig. 3).

• Type of rubber and design of the weathershed system;

• Level, location and type of discharge activity, which is determined to a large extent by E-field along the insulator, type and intensity of wetting, presence of contaminants and level of hydrophobicity of material.

The occurrence of 5 insulator failures several years ago on 115 kV and 138 kV lines prompted three utilities in the U.S. to initiate a study to better understand ageing mechanisms on insulators of this voltage class. As evident from EPRI’s failure database at the time (see Fig. 4), these failures were not isolated but rather part of a trend of increasing failures reported on 115 kV to 138 kV insulators. Data show that, on average, 7 failures/year were reported to EPRI since 1998.

Breakdown of failure modes of the 140 failures recorded in the EPRI database for of 115 kV to 138 kV insulators is presented in Fig. 5. From this it can be seen that the dominant failure modes were stress corrosion cracking (brittle fracture) and flashunder. A large proportion of these failures were on the same insulator design and specifically on units manufactured between 1993 and 1999.

During the investigation, it was shown that all such failures could be attributed to continuous discharge activity from the end fitting under dry conditions. This continuing exposure to corona resulted in cracks in the rubber sheath and degradation of the end fitting seal. Once a seal is compromised, moisture can come into contact with the fiberglass rod, leading to brittle fracture. Brittle fracture is a mechanical failure of the rod due to acid attack and where the fracture exhibits one or more smooth, planar surfaces – mainly perpendicular to the axis of the rod and giving the appearance of the rod being cut.

These activities focused mainly on the particular design that suffered most failures.

EPRI and 5 utility members together performed daytime discharge inspections on twelve 115 and 138 kV transmission lines to determine whether continuous discharge activity was occurring from end fittings under dry conditions. While these inspections were primarily directed towards one particular design, there were also opportunities to inspect a limited number of other designs. Examples of corona observations are presented in Fig. 7.

• To date, corona activity has been observed on 3 of the 4 insulator designs from different manufacturers (see Fig. 7);

EPRI worked with 5 utilities to evaluate degradation on over 200 units of 115 and 138 kV insulators removed from service. All had been installed between 1994 and 2006, without corona rings, and were of the same design. 74 insulators removed from service were subjected to detailed examination comprising a (1) visual inspection, (2) hydrophobicity measurement, (2) dye penetration test, (3) dissection and, in some cases, (4) mechanical testing. The remaining units were evaluated only with visual inspection. In all cases it was found that the most severe degradation was observed in the same regions, i.e. where dry corona activity was seen during daylight discharge inspections. On some units it was found that degradation of the sheath and end fitting seal had progressed to the point that the rod was exposed to the environment. These were considered as high-risk units where failure was inevitable.

Extensive 3-D E-field calculations were performed on behalf of 4 utilities at both 115 and 138 kV. The goal was to obtain a better understanding of expected E-field distribution on 115 and 138 kV insulators as well as the parameters that influence it and also to evaluate possible remedial measures. Importantly, E-field calculations were made to account for the presence of all three phases (and in some cases even adjacent circuits) on structures. Calculations focused on structures where failures had already occurred or where corona has been observed. These calculations considered both E-field on end-fittings (to indicate likelihood of dry corona) and along the sheath (to indicate the likelihood for water induced corona). The following conclusions were drawn:

• There is a significant difference in E-field levels between different insulator designs (see Fig. 9). Small and slender end fittings tend to have higher E-fields in the region of the end fitting seal. Shape of end fitting dictates where the highest field occurs and accordingly whether or not any dry corona present will be in contact with the housing material;

• Addition of 8” corona rings at the live end of the insulator was in most cases sufficient to reduce E-field magnitudes to an acceptable level;

Service experience strongly suggests the need for corona rings on 115 kV and 138 kV polymeric insulators to protect them from premature ageing due to corona activity. Although this conclusion may seem simple, the implications could be quite profound, especially if large numbers of such insulators are already in-service. Utilities would then be faced with the challenge of identifying high-risk units and deciding the most appropriate and cost effective remedial actions. Fortunately, deterioration due to corona discharge activity develops slowly and this gives utilities time to conduct proper condition assessment.

EPRI has helped develop a population assessment strategy to address premature ageing of polymeric insulators on 115 and 138 kV lines due to high E-field. Key in this strategy is a set of tools that includes field guides, failure databases, E-field modeling techniques, corona inspection technologies and relevant accelerated ageing test results. An overview of the process is shown in Fig. 10.

Since 2006 there has been an increasing number of polymeric insulator failures recorded on 115 and 138 kV overhead lines. These failures were serious since they occurred mostly on critical dead-end insulators that pose a threat to system integrity due to risk of a downed conductor. Investigation results suggest that these failures are due to high electric fields (E-fields) occurring close to or on the high voltage end fittings of these insulators. Consequently, corona or grading rings may also be necessary for polymeric insulators installed at these voltage levels.

1. At 115 and 138 kV, proximity of nearby phases significantly increases surface E-field magnitudes;

2. Most laboratory testing is done on suspension configurations but E-field magnitudes on dead-end and hard angle insulators are higher.