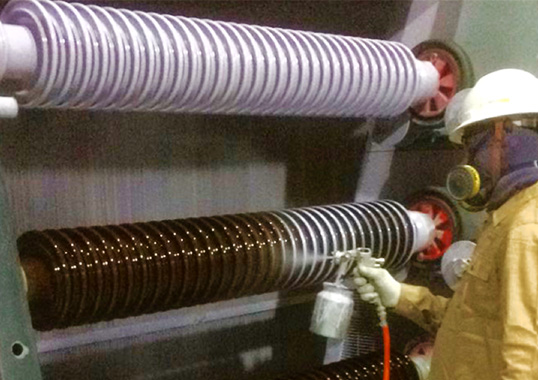 The Gulf State of Kuwait occupies one of the driest places on earth. A highly urbanized country, it is also one of the highest per capita consumers of energy, mostly for the oil and gas sector as well as for air conditioning and water desalination plants. Electricity demand peaks during the long dry summer when daily highs can reach 55ºC. There are also temperature fluctuations of as much as 25°C between days and nights which raise relative humidity and lead to frequent morning dew and even fog. Among the catalysts for flashover are frequent seasonal dust storms that result in rapid accumulation of pollution on porcelain insulators – especially along the country’s southern grid.

In 2018, T&D insulation coordination specialist Raouf Znaidi met with staff at the Ministry of Electricity & Water (MEW) that operates the Kuwaiti transmission network. In this edited INMR article, he reported on how maintenance and technical staff have implemented countermeasures to combat pollution flashover and enhance system reliability in a service environment dominated by desert, industrial and marine pollution.

The MEW network comprises some 600 substations that connect almost 10,000 circuit-km of overhead lines operating at 400 kV, 300 kV, 132 kV and 33 kV. This network runs along 500 km of shoreline and also crosses a flat sandy desert to supply regional desalination plants as well as petroleum refineries and petrochemical industries. MEW produces, transmits and distributes electricity to serve the needs of an expanding urban population with one of the world’s highest per capita energy demands while also benefiting from among the lowest electricity prices.

The power system in Kuwait serves a typical load profile dedicated mainly to extensive air conditioning and water desalination. The former systems account for nearly 70% of peak load and over 45% of total electricity consumption. As annual demand continues to grow, MEW has faced challenges in assuring consistently high quality service to users. Several years ago, MEW’s electrical sector implemented an action plan intended to improve key performance indicators of its transmission and distribution systems. The end goal was to keep the Kuwaiti power network among the most reliable and with one of the lowest outage rates – in spite of being exposed to severe pollution. Among the initiatives in this regard was one focused on predictive and preventive maintenance as well as remedial measures. The cornerstone of these measures has been a program to apply RTV silicone coatings to improve pollution performance of porcelain long rods. This program proved particularly notable since it was the first in the region to feature live replacement using a new generation modified heavy Zoom line along with high-performance techniques.

MEW’s overhead system is insulated mainly using anti-fog type porcelain long rods. This applies to the entire 400 and 300 kV network and some 98% of the 132 and 33 kV systems, the balance of which is porcelain cap & pin strings.

To mitigate impact from deposition of contaminants as well as heavy wind loads, almost all lines in Kuwait are over-dimensioned. This has led to unified specific creepage distances of as high as 65 and 63 mm/kV (according to the latest IEC 60815/TS) and to 320 kN and 230 kN minimum failing loads. Coupling size for 400 and 300 kV tension & suspension insulators are 24 mm and 20 mm respectively. Tables 1 and 2 summarize circuit lengths as well as the insulation and technical characteristics of long rod insulators used on each system.

Pollution has not been the only factor affecting MEW’s transmission lines. For example, the network near the Al-Zour Power Station in the south and the southern network in general have suffered from dense fog, sandstorms and heavy winds. In fact, a combination of these led to a major blackout in February 2015 that provided lessons and offered an impetus to resolve perceived weaknesses in overhead line insulation.

Events such as this influenced subsequent decisions in regard to the most effective global maintenance strategy that includes pollution countermeasures, reinforcement of lines, periodic inspection, live washing and even deadline cleaning. For example, to reduce incidence of network outages following the blackout, at least 24,000 towers were live washed annually while in 2017 some 900 towers were inspected using infrared cameras as part of the targeted preventive and predictive maintenance program.

There has been growing worldwide interest in application of RTV silicone coatings to mitigate pollution-related flashovers of ceramic insulators that suffer poor pollution performance due to inappropriate selection or insufficient self-cleaning. Such a solution is usually based on a range of criteria, including effectiveness in suppressing leakage current, maintaining hydrophobicity as well as satisfactory adhesion and minimizing arc degradation or surface damage due to discharges. In fact, studies have demonstrated that there can be significant differences between different RTV coatings available on the market in terms of their long-term performance, especially after ageing in a harsh desert environment.

Given this, special effort was devoted to selecting the most suitable coating type and formulation to be applied in Kuwait, including the most reliable primer as bonding agent. MEW’s implementation team then looked to this solution to minimize pollution related leakage current while optimizing the costly and time-consuming remedial measures used in the past. Testing then confirmed that the RTV formulation selected by MEW showed exceptional adhesion properties and was virtually impossible to remove from coated surfaces after curing.

The solution of applying RTV coatings combines the reliable mechanical properties of porcelain with the excellent pollution withstand and leakage current suppression of silicone rubber. At the same time, it was decided that taking down and coating existing long rod insulators with RTV silicone would be more cost effective than the alternative of a wholesale change in insulator technology. This solution was also felt relatively easy to implement inside a specialized coating plant, which included a curing area with controlled temperature and humidity.

In the end, construction of a specialized facility for RTV coating in Kuwait was the result of collaboration between stakeholders. The air-conditioned workshop consisted of separate areas that together allowed for a finished coated product that met all technical specifications and requirements. One area was reserved for insulator cleaning & silicone preparation. A second was dedicated to coating application, accomplished using conventional air spray gun equipment and a novel machine with rotary axes modified to hold up to three long rod insulators at once. This set-up allowed optimizing application time and costs such that at least 40 long rod insulators could be coated each day by a team of trained workers. A third area saw ambient curing of coated insulators while a fourth focused on quality control and packing of insulators such that they would be protected during transport and ready for installation on site.

Since dust can have adverse impact on adhesion of RTV coatings, cleaning and preparation of insulators is of paramount importance. All incoming long rod insulators were therefore washed carefully by pressurized water and then cleaned by hand and dried. A first thin layer of primer was then applied, consisting of a bonding solution of reactive siloxanes and silanes that adhere firmly to porcelain under the controlled ambient temperature and humidity. Final coating quality required a consistent primer layer of less than 10 µm, with no trapped air. This was followed by a drying time of between one to two hours at ambient temperature.

Then, no more than 5 hours later, two or more successive RTV silicone layers were sprayed on so as to achieve average coating thickness in the range of 250/300 microns, as specified for the MEW electrical network. As the solvent mixed with the RTV material evaporates, moisture in the air triggers vulcanization that forms a solid rubber coating. The speed at which this process takes place depends on the type of RTV silicone and solvent as well as on ambient temperature and humidity inside the workshop. The curing process for coated insulators must take place under consistent, well-controlled environmental conditions.

Special attention was devoted to protecting the RTV silicone coating with bubble sheet protectors and wooden packaging before storage and transport to the job site by a truck equipped with an adapted control crane. The entire process – from insulator preparation to coating to curing to inspection to packing and transport for live replacement – was closely supervised.

MEW devoted months to mobilizing large human and material resources as well as equipment specially adapted for live line work. The goal was to complete one of the most ambitious network maintenance projects in the region, namely live replacement of existing 300 kV and 400 kV porcelain long rod insulators by the same type but with locally-applied RTV coatings. Since all HV insulator strings in Kuwait are standardized and interchangeable, the option chosen to optimize installation time was to remove existing long rod insulators and simply replace these by coated insulators brought in from the local workshop.

To accomplish this, two latest generations modified Zoom lines were brought in. The first crane was dedicated to horizontally (tension towers) or vertically (suspension towers) holding 2 to 4 long rod insulators strings through an insulated stick extension. The second Zoom line, with insulated basket for live work, served to hold workers.

Equipment capabilities included an 80-ton lifting capacity and an up to 70 m height, along with insulated telescopic length for up to 500 kV. Together with high performance work techniques, this allowed live replacement of four existing long rod strings by four locally coated RTV strings in less than 90 minutes for suspension towers and less than 3 hours for tension towers.