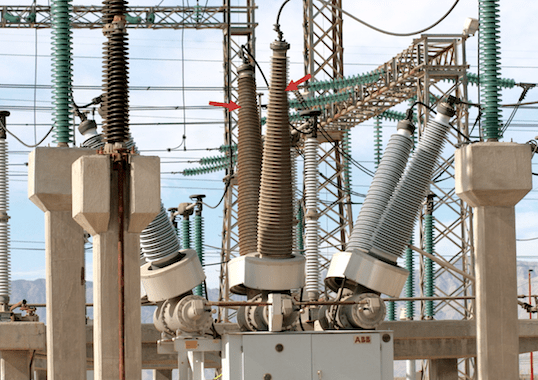 The first application of composite insulators in Mexico began in the mid 1990s with initial use limited to transmission lines in areas with pollution problems. A growing body of service experience eventually resulted in a national standard for such insulators on Mexican HV lines. However, because of lack of sufficient local operating experience, the application of polymeric-housed substation apparatus such as bushings, arresters and station posts has yet to be standardized in that country.

To gain experience with composite insulator technology in the Mexican substation environment, polymeric bushings were installed several years ago on a 230 kV circuit breaker operating in an environment of severe pollution. Their performance – as well as that of 230 kV polymeric bushings installed four years earlier in a known seismic area with high industrial and coastal pollution – was then evaluated using inspection methodologies such as corona, electric field distribution, leakage current and hydrophobicity measurements.

This INMR article from 2012, contributed by Ruben Sáldivar-Guerrero of  Mexico’s Electric Research Institute (IIE) as well as staff from the Substation Department of the Comisión Federal Electricidad (CFE), reviewed past research and findings.

The specification of composite-housed components such as bushings has grown worldwide due to the advantages offered compared to traditional porcelain housings. Much lower weight yet high mechanical strength and hydrophobic surfaces combine to make these types of components ideal for areas with severe pollution as well as high seismic risk.

Unfortunately, initial Mexican operating experience with composite insulator technology was not encouraging. It began during the 1980s when the first overhead line equipped with these insulators was constructed in the western part of the country. These insulators suffered from defects and failed even before the line’s commissioning due to poor mechanical strength and low UV resistance of their housings. Because of that experience, non-ceramic insulation was for years essentially banned from all outdoor applications in Mexico.

Then, in October 1995 and January 2003, two powerful earthquakes, measuring 7.9 and 7.6 respectively, shook the coastal area of Colima – a region of high seismic activity and also vulnerable to climatic problems such as tropical storms and hurricanes.

Manzanillo I and II are two large power stations located on the Colima coastline. Between them are six generators that supply four 400 kV transmission lines, a 230 kV line and five substations with a total capacity of 3,747 MVA. The intensity of the recent quakes caused severe damage to switches, transformer bushings and other equipment, with much apparatus destroyed due to the poor seismic withstand of porcelain.

Apart from the constant threat of earthquake, Manzanillo I and II are also affected by pollution from the sea as well as from local combustion of fossil fuels that together impact performance of external insulation on equipment such as bushings.

In order to prevent pollution flashovers and interruption of service, Mexican national standards were revised to permit the use of non-ceramic bushings on transformers operating in this environment. Subsequently, this was extended as well to all substation equipment located in areas of high seismic activity and pollution and also for mobile substations. Silicone rubber housings were considered a better option than porcelain in such applications due to their superior pollution performance as well as lower inertia and higher flexibility, with a circa 10 to 1 reduction in weight compared to ceramic material.

A research project was therefore undertaken at the Manzanillo substation where the previous porcelain bushings on a total of 10 power transformers were replaced by units with silicone composite housings. The surfaces of these new bushings were then closely monitored using diagnostic tools such as measurement of contact angle and surface resistivity.

Since installation in 2003, these new bushings have demonstrated excellent service performance. Moreover, their silicone housings have remained hydrophobic in spite of the build up of a pollution layer. This meant that live washing, which in the case of the previous ceramic bushings had to be performed regularly during 7 months, could be reduced to less than once a year.

The 400 kV air-insulated substation at Manzanillo was subsequently replaced by a GIS with a total of 21 silicone bushings interconnecting to transmission lines. This made it the country’s largest installation employing silicone bushings.

The next step in the application of non-ceramic bushing technology in Mexico was to investigate how long these silicone housings could maintain good performance under the demanding local service conditions – in other words what life expectancy could be expected for them. With this in mind, the CFE initiated a project to install similar non-ceramic bushings at another substation with the same type of service conditions as Manzanillo.

Two non-ceramic bushings were installed on a 230 kV dead tank breaker at the Cerro Prieto generation plant in Mexicali, located in the same seismic region as Manzanillo.

This geothermal facility consists of four generation units: Cerro Prieto I with an installed capacity of 180 MW; Cerro Prieto II and III, each with 220 MW capacity; and Cerro Prieto IV with a capacity of 100 MW. Because equipment at the substation is continually exposed to a combination of industrial contamination and condensation, all insulation there has historically had to be washed at least several times a year.

Non-ceramic bushings were installed at the substation in March of 2007 and monitored closely since then using leakage current measurements where the frequency and range of current peaks were recorded using a custom-built data acquisition system.

In addition, their electric field distribution was measured both before and over the course of the test period using an instrument originally developed at Hydro-Québec. Finally observations were also made with a UV camera to identify risk of corona damage to housings. In addition, a series of specialized tests were also performed on each insulator including static contact angle measurement, chemical characterization by infrared spectroscopy as well as analysis of surface microstructure.

For example, digital imaging analysis involved a water drop being placed on the non-ceramic surface and recorded with a high resolution camera. The file was then analyzed using software to measure static contact angle. Similarly, microstructure analysis was done by replication – a non-destructive technique that records topography of surface microstructure as a negative on a thin cellulose acetate film.

To benchmark their condition when new, the non-ceramic bushings were evaluated at the start of the test using the characterization techniques discussed above. Figure 1, for example, shows the electric field distribution for the bushing connected to the line, both in 2007 when first installed and then again in March 2011.

The principle of measurement in this case involves tangential electric field along the bushing. As shown, electric field is concentrated toward the bottom of the bushing and also at the top where it connects to the line. The shape of the curve suggests that there are no obvious problems with the breaker. A similar pattern of electric field distribution was also noted for the non-ceramic bushing connected to the outgoing line.

Nor were any corona effects detected along the lengths of the bushings being monitored, in spite of some isolated ionization of the air near the line connectors. This absence of corona provides evidence that there has been no external degradation of the insulation housing even though the bushings have not been washed since installation. Because silicone rubber has the property of transferring its hydrophobicity into the contamination layer, this allows them to remain hydrophobic even under the heavy service pollution.

A leakage current system was installed near the breaker and downloaded data indicated current peaks of only around 8 mA – much less than the 50 mA needed to trigger onset of dry band activity on the surface. Even during sporadic rains, maximum peaks recorded were in the area of 24 mA, not enough to cause any deterioration of the silicone insulation.

Moreover, to further evaluate hydrophobic behavior of the housings during the test period, static contact angle was measured on sheds located near the top, middle and bottom of the bushings (see Figure 3).

Although low molecular weight silicone chains from the surface are consumed initially due to moisture on the sheds, with time these molecules migrate from the bulk polymer and accumulate on the contaminated surface, restoring surface hydrophobicity.

Table 1 provides the static contact angle values recorded. As can be seen, contact angles on almost all sheds of both test bushings decreased during the first months (June 2007) but then increased up to the last evaluation. Similar behavior has been observed during accelerated ageing tests in the laboratory and can be explained by the fact that, initially, low molecular weight chains from the surface are consumed due to rain or condensation on the sheds. However, with time, these types of molecules migrate from the bulk polymer and accumulate on the contaminated surface, thereby restoring surface hydrophobicity and increasing contact angles.

It is noteworthy that while the non-ceramic bushings were never washed during the entire course of the test, they continued to maintain hydrophobic surfaces. This reduced the risk of leakage current under rain and condensation and helped preserve the integrity of the housings, even in the challenging service environment.

In each evaluation of the two test bushings, their chemical composition was also verified using Fourier Transform Infrared Spectroscopy (FTIR). Figure 4 shows typical FTIR spectra of the connected bushing housings at different evaluation times, measured on the bottom shed. Peaks a, b and d are absorptions attributed respectively to the C-H, Si-CH3 and Si-O-Si bonds, which are components of silicone rubber and serve to identify silicone as the main component of the housing material.

No changes were detected in these absorption peaks over the course of the different evaluations, meaning that the silicone rubber material did not degrade during the test period.

Moreover, the housings showed no evidence of chemical changes along the full length of the bushings, as shown in Figure 4 which presents FTIR spectra measured at different shed positions of the bushing four years after installation. Again, there are no changes in absorptions peaks, from which it can be concluded that the chemical composition along the housing has been maintained during the test time, with no degradation.

Finally, the microstructure of the housing surface was analyzed using a non-destructive technique that looks for changes on polymeric surfaces. Figure 5 shows that some microstructural changes were evident after four years of service, possibly due to the contamination layer not having been removed by washing. However, by both chemical and physical characterization methods, it is still clear that the non-ceramic bushing housings have not suffered any significant deterioration.

A strong earthquake, measuring 7.2 on the Richter scale, occurred in Mexicali on April 4 of 2010. The intensity of the tremors severely damaged electrical equipment such as circuit breakers and transformer bushings with porcelain housings, which shifted out of their normal flange position. By contrast, the two non-ceramic bushings did not suffer any damage. This event only confirmed the wisdom of applying non-ceramic insulation on substation equipment, especially for such seismic regions with high contamination.

The application of non-ceramic insulation on various HV equipment started in Mexico only during the past decade. Initial use was focused on 400/230 kV transformer bushings at the Manzanillo II Substation with the goal of preventing failures due to earthquake. Up to now, these bushings have demonstrated good service performance, even here in one of most severe seismic regions of the country.

To gain additional experience, two non-ceramic bushings were installed on a 230 kV dead tank breaker in an equally seismic region in order to study possible degradation of their polymeric housings as well as possible loss of electrical performance. These bushings were then subject to extensive electrical and physicochemical diagnostic tests.

After four years of service, there have been no signs of deterioration. Corona, leakage current and electric field distribution testing have all confirmed that the new bushings were able to withstand both seismic movement and heavy industrial contamination, even without washing. Contact angle evaluation and chemical analysis of their surfaces showed no longterm loss of hydrophobicity, nor of any noticeable degradation to their silicone housings.

This experience with non-ceramic bushings has not only suggested excellent service performance can be expected but equally important that maintenance costs can be significantly reduced.