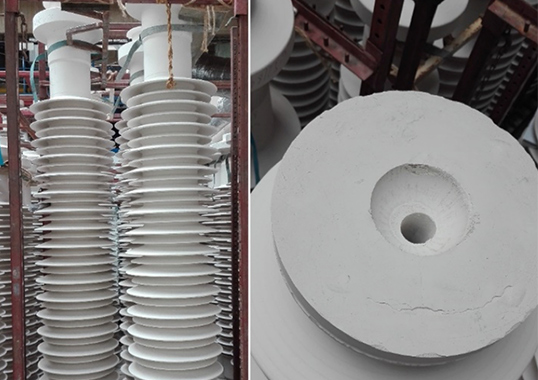 Fibre optic technology is one of the solutions to achieve the digital substation. It is ‘immune’ to EMI/RFI and has reached a level of maturity that has helped push down costs. Moreover, optical sensor technology does not require a power source at the point of measurement and the light source can be hundreds of meters away – even outside the substation itself. But installing fibre optic cable for data capture and transmission in a substation can present challenges given that it must pass through insulators.

This edited contribution to INMR by Markku Ruokanen of PPC Insulators in Austria explains how a fibre optic hole can be manufactured in ceramic insulators using existing production processes. It also explores potential future applications for this technology when it comes to monitoring forces, movements and vibrations of ceramic insulators as part of a digital substation.

Rayleigh, Brillouin and Raman scatterings in fibres result from interaction of photons with local material characteristics such as density, temperature and strain. For example, an acoustic/mechanical wave generates a dynamic density variation that is affected by local temperature, strain, vibration and birefringence. Detecting changes in amplitude, frequency and phase of light scattered along the fibre therefore allows realization of a distributed fibre sensor to measure localized temperature, strain, vibration and birefringence over lengths that range from meters to a hundred kilometres. Such measurement can be made in the time domain or in the frequency domain to resolve location information. Moreover, with coherent detection of scattered light, one can observe changes in birefringence and beat length for fibres and devices. Such distributed sensors can be used for disaster prevention in structural monitoring of pipelines, bridges, dams and railroads. A sensor with centimetre spatial resolution and high precision measurement of temperature, strain, vibration and birefringence can also find applications in aerospace, smart structures, materials processing and characterization of optical materials and devices.

Conventional piezoelectric sensors are constrained under high temperature and prove inadequate when measuring static quantities due to charge leakage. These limitations make them an unsatisfactory solution where reliability, hardiness and ease of application are requirements, such as on high voltage power lines. With development of optoelectronic technologies and increased industrial use, optical fibre sensors have become widely accepted and achieved technical maturity. The advantages of such sensors are significant, especially in harsh environments, given that they are immune to electromagnetic interference and radio frequency interference, while also being small and easily integrated into networks. They also offer other advantages, including extremely high sensitivity at low frequencies, low harmonic distortion, high signal-to-noise ratio, high signal quality, long term reliability and stability and very low losses on long optical data connections.

Today, industrial sensors such as optical microphones, optical temperature sensors, optical accelerometers and vibrometers are available from multiple suppliers. Moreover, as demand for fibre sensors increased rapidly in a fast-developing market, manufacturing volumes have increased exponentially, leading to significant cost reductions. In high voltage technology, fibre optic current sensors (FOCS) already in use rely on the Faraday effect, which causes polarization of linearly polarized light to rotate in the presence of a magnetic field, when propagating in a material that exhibits this effect (see Fig. 1).

The technical challenge when using fibre optic technology with porcelain insulators relates to manufacturing such an insulator with a straight 15 mm diameter 3 m long hole. For one, the C-130 porcelain mass is extremely hard and would require special drilling heads. Keeping the hole straight across its entire length would be another challenge. This makes drilling time consuming as well as costly if relying only on conventional technologies. Moreover, manufacturing such a precise small hole with the plastic extrusion process for porcelain insulators is not feasible. Fortunately, industrial engineers at PPC Insulators have used years of experience with cold isostatic pressing to develop a method to create holes other than by drilling or conventional extrusion. Firstly, a fine carefully controlled granulate with very specific grain-size distribution is prepared. A cylinder is filled with this granulate and pressed to over 1000 bar, resulting in a solid blank for shaping and firing. An insert is added to the cylinder at this stage, which remains in place during the compression phase but removed after compression and before turning. Fig 2 shows a turned blank containing a fibre optic hole, ready for glazing and firing.

Once the insulator has been fired, production continues following all the steps in conventional insulator manufacturing, i.e. cutting, grinding, assembly and testing. Fig. 3 shows a fired C30-850 post insulator with a perfectly straight 20 mm wide hole on its central axis. The fittings must be pre-drilled and the hole and threads protected during the cementing process. Fig 4 shows completely assembled insulators.

Since the fibre optic hole is on the neutral axis, it does not affect mechanical strength of the insulator. Nonetheless, to verify this, samples of C30-850 post insulators were manufactured with fibre optic holes for benchmarking bending tests performed at PPC’s CAB plant in Slovakia. Fig 5 shows set-up of the bending test and Table 1 presents findings.

These results confirm that the mechanical strength of a fibre optic post insulator is not affected by the hole in its neutral axis. In addition, this destructive test allowed observing whether or not the breaking mechanism was identical to that occurring with standard posts. All samples broke at the 2nd or 3rd shed from the bottom where cantilever forces are greatest and breakage surface was identical to that of a standard post insulator. As such, it could be concluded that the hole does not affect strength, breakage mechanism or crack propagation of the porcelain.

A post insulator specially manufactured to contain a fibre optic hole allows such a sensor to be placed inside the insulator rather than simply drawing the fibre inside. Stresses and strains in any such solid material can be resolved into 6 components: 3 compressive or dilatative and 3 shears. These stresses cause acoustic waves in a material, which vary considerably based on its microstructure and elasticity. Frequency and amplitude of these acoustic waves vary as well depending on source of the stress. Waves can be recorded using microphones and the data analysed. For example, this well known technology is widely used in preventive maintenance and monitoring of rotating machines such as turbines. These same principles could also be used to monitor a porcelain insulator at a substation. Stresses could be caused by wind, vibration from an overhead line, external impact or movement of a switch when the insulator is used to transfer force as a torsion rod. Data collected during such events could then provide valuable in understanding the physical shape and functioning of the insulator or of the system in which it is a component. This information could then be added to the monitoring system at the substation.

A short feasibility test was organized jointly between the Faculty of Electrical Engineering and Information Technology at the Slovak University of Technology in Bratislava and PPC Insulators CAB. An insulator was placed vertically into a bending machine at the plant’s test facility. A microphone was placed into a cable hole and the lower end of the hole filled with foam. The upper end of the hole was also filled with foam to isolate the microphone from environmental factors outside the insulator. An accelerometer was then attached to the insulator surface using epoxy glue. Figs. 7 and 8 show the test set-up. The insulator under test was loaded 21 times with different forces and different bending rates. Table 2 presents the test program with accelerometer and microphone.

The first objective was to understand whether the acoustic waves are dependent on internal stress of the insulator material. During the first test, the insulator was mechanically excited by tapping it with a metal rod in a direction perpendicular to the insulator axis. Measurement began with no force on the insulator. Responses to 5 taps about one second apart were recorded. Next, the insulator was loaded to 50% and again 5 tap responses were recorded. This scenario was then repeated for a 95% load. Responses to taps were individually normalized to have the same amplitude. Fig. 9 shows 3 normalized impulse responses at loads of 5%, 50% and 95%. This way, it was concluded that stress level of the ceramic did not affect the acoustic signals.

Fig. 10 shows measurement sets from two groups of resonant modes: the first at approximately 3 kHz and the second being a single resonant mode at 18.85 kHz. Comparing resonant modes at the load values indicates that they did not have direct correlation with load and could not be directly used to determine load acting on the insulator.

A neural network can find connections between events in processed signals that are normally hidden from view or are too complex to be processed by the observer. Proper training of the neural network is essential for its correct operation. Quality of the training process depends greatly on sample size and 21 measurements are insufficient to train a neural network. Required sample size must be at least 100 times greater and, even then, this would still not guarantee success using this approach.

Accelerometers can be used to measure vibration, direction and magnitude of acceleration and direction of vector of gravitational acceleration. Since the insulator was fixed to the test machine, it was possible to measure only vibration and gravity acceleration. Measured vibration data was similar to the acoustic data. The most valuable data came from measuring the angle of gravitational acceleration. After filtering and processing the data, it became possible to calculate deflection of insulator bending and correlate this to bending load. Fig. 11 shows processed measurement data as bending force over time. It was observed that bending was not 100% reversible and that the insulator did not return to its original position. In this case, test loads were extreme and it is improbable that any insulators function permanently at 95% nominal strength. Since a different insulator will have a different ratio between bending force and deflection, measuring bending ratio for each individual insulator would be required to confirm a systematic correlation.

This feasibility test also suggested that using ceramic insulators equipped with optical sensors would require calibration after installation at a substation.

Manufacturing fibre optic post insulators is possible in an industrial and cost-effective way using isostatic production technology and, since the fibre optic hole is on the neutral axis, mechanical performance is unaffected. It thus becomes possible to measure acoustic waves and vibrations inside a ceramic post insulator. Stress level of the ceramic does not affect acoustic signal frequency or propagation in the material itself. Measurements made with an accelerometer show good correlation to actual deflection, which theoretically also allows indirect measurement of the force.

In this particular research, number of measurements was insufficient for proper training of a neural network to accomplish deeper analysis. It was therefore not possible to detect direct correlation between applied force and measured acoustic waves. Nonetheless, a fibre optic hole allows adding sensing and data gathering capabilities to porcelain insulators. Data collected, once filtered and analysed, can be used for substation monitoring. In this respect, it is a first step toward an intelligent insulator that can sense its environment and provide important system data for those charged with managing a substation. Towards this goal, further work will be needed to confirm repeatability of measured data and determine correlation between load and acoustic wave.