IEC standards already exist for extruded cables for AC applications but not to the same extent for DC. Recommendations for testing DC cables were presented in the past within CIGRÉ (i.e. Electra #72 in 1980 and #189 in 2000). These were based on then available paper-insulated cables, oil-filled paper insulated cables and internal gas pressure cables. Later, increased market demand for extruded DC cables for higher transmission voltages resulted in the CIGRÉ Reports #219 and #496. Moreover, IEC 62895 “HVDC power transmission cables with extruded insulation and their accessories for rated voltages up to 320 kV for land applications – Test methods and requirements” has since been under preparation. This standard applies the same basic philosophy as for extruded AC cables, with the following main tests to be performed:

1. Development Tests (DT)
These are performed during the development phase of the cable system;
2. Routine Tests (RT)
Manufacturers perform these tests on each manufactured component to verify that the component meets specified requirements;
3. Type Tests (TT)
These tests are carried out before supplying a cable system and are to confirm satisfactory performance to meet the intended application;
4. Long Duration/Pre-Qualification Tests (PQ)
These are performed to demonstrate reliability of the complete cable system in regard to long-term performance;
5. After-Installation Tests (On-Site Tests)
These are intended to demonstrate the integrity the cable system as installed.

Besides the various tests carried out by manufacturers (i.e. development, routine and sample tests), it is recommended that further tests be conducted to confirm the functionality of the cable system (i.e. type tests and pre-qualification tests). These are typically performed at independent external laboratories to increase confidence by the utility in the test reports being provided. One major difference of DC cables compared to already introduced AC cable systems is their expected behaviour during polarity reversal of test voltage. This is important since the high specific resistivity of XLPE materials causes accumulation of space charges and therefore temporary by electric field strength.

To meet increasing demand for tests on extruded HVDC cables, specialized laboratories have been built to carry out such tests. For example, a recently built laboratory in Mannheim, Germany is now one of the world’s largest HVDC cable and accessory test facilities and allows development tests, type tests and long duration tests (PQ) to be carried out for rated voltages up to 600 kV DC. Overall hall size is 60x26x21 m (Lx- WxH) and three independent areas of 26×20 m each can be separated by movable walls to allow smaller test facilities with different HVDC generators, i.e. 800 kV, 1200 kV and 1600 kV.

Other features include a 3000 kVpk/300 kJ impulse generator, electromagnetic shielding for PD measurements, cable ducts for installation outdoors (up to 6000 m²) and two 10 ton cranes for sample handing. Up-to-date technical recommendations can be specified while tailor made solutions based on client specifications can also be applied. 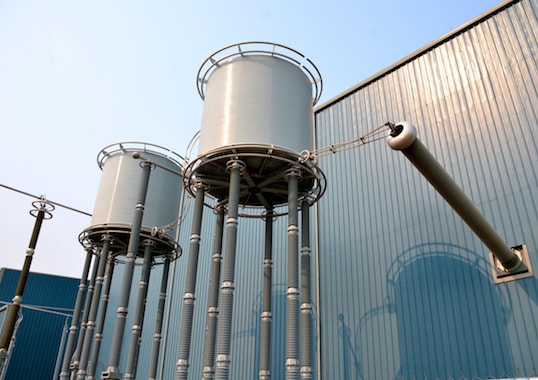