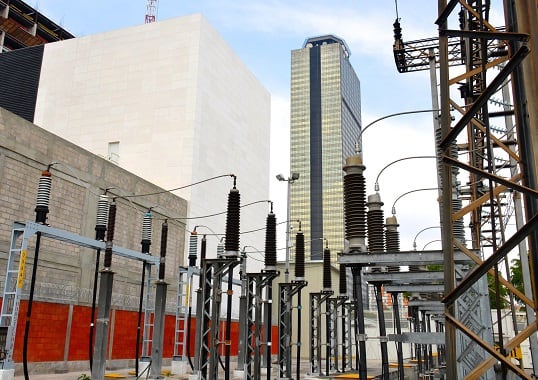 As elsewhere in North America and across many countries in Europe, much of the power infrastructure in Mexico is nearing 50 years and in need of modernization. This is particularly true for the country’s capital, Mexico City, a bustling metropolis that is now in the midst of a building boom.

Until several years ago, the network serving this vast urban area of 20,000 sq. km was operated by a public company called Luz y Fuerza del Centro. This firm, originally founded in 1903, provided electricity to nearly 6 million customers, representing more than 20 million people in the Mexico City Federal District as well as in the adjoining states of Morelos, Hidalgo and Puebla. In October 2009, however, its network was amalgamated by Presidential decree into that of the country’s national power system operator, Comisión Federal de Electricidad (CFE). Since that time CFE has been focused on refurbishing the ageing network it inherited and increasing its reliability.

A good example of the challenges and solutions in this process is the Veronica GIS Substation located in Veronica Anzures – a mixed residential and commercial area near the city’s historic center. Recently, INMR traveled to Mexico City to meet the CFE engineers involved in this project.

One of the major initial challenges faced by CFE after it took over the network formerly operated by Luz y Fuerza was better integrating it into the rest of the grid. Marcelino Torres, Head CFE’s distribution and sub-transmission activities across the country, explains that Mexico City is surrounded by a ring of interconnected substations that transform incoming 400 kV lines to 230 kV to supply the city. However, until recently, much of the Luz y Fuerza network still operated at 85 kV. This made it increasingly difficult to refurbish due to lack of availability of new components and equipment for this voltage class. Indeed, at the time of the takeover by CFE, the 85 kV system still represented about half of the total network in Mexico City. This share has since been progressively reduced to circa 35% and, over the next 5 years predicts Torres, it will account for only some 15%. It will then likely be maintained at this level since certain industrial customers continue to demand service at this voltage.

Another issue facing CFE in terms of the ageing Luz y Fuerza network was a history of poor reliability. “At the time we took over,” notes Torres, “the mean system-average interruption duration index (SAIDI) in the Mexico City valley stood at some 900 minutes. This was almost 15 times higher than elsewhere in Mexico and from 20 to 40 times more than typical of countries such as Austria, England or France.”

According to Torres, substantial improvement in reliability was realized in the months immediately following the changeover without any new investment but only through better operating methods. In 2010, for example, SAIDI was reduced to about 400 minutes, which then further decreased to 170 minutes in 2012 and 87 minutes in 2013. Last year, the steady improvement continued with SAIDI in Mexico City amounting to less than 50 minutes. Explains Torres, “we achieved these improvements through better practice, by significantly increasing grid automation and by applying the standards CFE uses elsewhere across Mexico. Now, SAIDI in Mexico City compares favorably with the rest of the country where it currently stands at only about 37 minutes.”

Refurbishing the ageing power infrastructure across Mexico City is the next challenge since Torres states that failure of old equipment is one of the major causes of service interruptions – behind objects striking lines and cars hitting utility structures. In regard to the underground network, which is still 80% comprised of oil and paper cable and only 20% XLPE cable, equipment failure is the leading cause of outages.

A good example of CFE’s current investment program to refurbish and strengthen the former Luz y Fuerza network is the Veronica 85/23 kV GIS substation. Located in an area near the city center, one of the constraints was lack of space, since the substation is sandwiched between residential complexes to one side and an expanding number of high-rise commercial buildings on the other. Up until the current project, Veronica Substation was supplied by 5 circuits of 85 kV oil and paper feeder cables and also by 2 lines of newer 85 kV XLP cable. The substation has a double bus, single breaker configuration. This arrangement allows operation of the circuits from either bus such that failure on one will not affect the other. It was seen as necessary to maintain this part of the substation in operation after the current refurbishment project because some customers continue to feed in directly at 85 kV

The initial GIS system at Veronica is housed in a compact 30 m x 10 m structure and made up of two generations of equipment – the first from the time the system was first installed in 1981 and the second added in 2012. CFE Manager for this substation, Nabucodonosor Solis, explains that the two are basically similar but that the newer equipment is outfitted with built in monitoring functions, such as for gas pressure, and also offers newer devices to operate the disconnecting switches inside the bus.

Since most of the incoming feeders for the 85 kV GIS are oil and paper cable, this technology is converted to XLPE cable directly outside the structure to avoid any presence of oil near the GIS. Here is one example of the difficulty in obtaining new components for 85 kV since both the porcelain terminations and the XLPE cable for this application are rated for higher voltage classes and therefore over-dimensioned for this application. “We selected these terminations simply because the supplier had them available in stock and they do not present a problem in terms of insulation co-ordination,” says Solis. He also remarks that while the station’s pollution exposure is classified as ‘medium’, the porcelains still need to be cleaned periodically from dust thrown up by passing traffic. This is carried out about once a year, when the cables are ‘dead’ for testing, and the process involves hand wiping rather than high-pressure washing.

Another example of past design constraints, in this case imposed by lack of space, is the conversion of two incoming circuits from oil and paper to XLPE cable without protection by surge arresters, as are used for such transitions on other feeders at Veronica where more space is available. This temporary situation, explains Solis, will soon be resolved as new incoming XLPE cable will go directly to a new on-site GIS facility linked to two new 230/23 kV transformers. Pre-measured lengths of new 23 kV cable are already on-site and laid out carefully in a small area separating the substation and an adjoining control center for Mexico City. Solis remarks that this was done to allow the cable to be connected quickly to the new GIS and avoid any need for joints in the process.

The showpiece of the current refurbishment project at Veronica is the tall new structure which houses the station’s soon-to-be energized 230 kV GIS equipment. Linked to two new 230 kV 3-phase transformers, the work has so far taken about 18 months and the investment involved has totaled some US$ 20 million equivalent in local currency.

About half of this was for the civil works and the other for the GIS, transformers and new switchgear cabinets. Not included in this total is additional work that will be needed to connect Veronica to a 230 kV incoming supply, expected to be completed by July this year. Part of the reason for the high cost of the building is that it has been engineered with special damping equipment to move as a single unit thereby protecting the GIS inside from excessive shaking. As such, the facility is built to survive and remain operational even during earthquakes of magnitude 8 or more on the Richter scale – a realistic design scenario given the seismically active surroundings of Mexico City. The height of the building reflects the land constraint since it houses not only the GIS on one floor but also the metal-clad switchgear directly above it on an upper floor.

According to Solis, the work now being done at Veronica Substation to upgrade it from 85 kV to 230 kV will also contribute to lowering power losses as well as improving voltage stability. Says Solis, “the old infrastructure here simply could no longer cope with the growth in power demand by the urban surroundings. Our investment reflects the realization that expansion of our network in Mexico City has to be accomplished at 230 kV and not at the old level of 85 kV.”

Another recent upgrade project next to Veronica Substation was in the control center located just alongside. Its Manager, Juan Carlos Verdugo, reports that while the building dates back 35 years, most of the equipment was completely refurbished in 2013 to allow it to better meet the demands of supervising an urban area with a population of more than 2 million.