The focus when it comes to components and equipment used on power grids has traditionally been on cost and performance. However with increasing scrutiny of all issues linked to climate change, manufacturers and users alike are now paying more attention to the net ecological impact of these products – from extraction of their raw materials to how they are manufactured to what happens to them at end-of-life. This is especially important for items such as electrical insulators due to the huge numbers used on power networks.

This article combines a contribution by Alberto Pigini on tendencies and new regulations when it comes to recycling and disposal of insulators with a case history of how these types of issues have been addressed in the past at one large utility in Brazil.

Methodologies such as Life Cycle Assessment that evaluate the full environmental impact of any product from ‘cradle to grave’ have become ever more important in the power industry. Indeed, a clause similar to what appears below is now increasingly common in technical specifications for insulators and other apparatus, adding an environmental dimension to past requirements that talked only about manufacturing, testing and delivery:

“Suppliers are required to comment on the environmental soundness of the design and on the materials used in the manufacture of the items offered. In particular, comments should address such issues as recyclability and disposability at the end of service life.”

Support toward developments in this area has come from IEC TC 111, which dealt with Environmental Standardization for Electrical and Electronic Products and Systems and worked to produce relevant Standards, including:

• IEC Standard 62474, Material Declaration for Products for the Electro Technical Industry, moving toward a standardized declaration about the environmental compliance of all materials that make up the final product;

• IEC Technical Report 62635, Guidelines for End of Life Information Provision from Manufacturers and Recyclers, and for Recyclability Rate Calculation of Electrical and Electronic Equipment, intending to provide information to recyclers so as to enable appropriate and optimized end-of-life treatment. This report has also evaluated recyclability and recoverability rates based on product attributes that reflect real end-of-life practices.

One of the aspects that most affects the environmental impact of products such as insulators and related apparatus is the strategy adopted at their end-of-life, whether recycling or disposal. Each year, transmission and distribution utilities generate significant quantities of waste such as epoxy, silicone and porcelain materials, especially during projects to renew ageing infrastructure. Although this kind of waste frequently ended up in landfills, waste management directives in places such as Europe encourage recovery and recycling through more restrictive use of landfills. Several years ago, for example, the European Parliament issued directives on waste electrical and electronic equipment (WEEE) stating that all such equipment must be recycled and effectively banned disposal in landfills. Greater restrictions on electrical waste, now and in the future, mean that producers as well as users of high voltage apparatus will increasingly have to identify alternative waste-management methodologies. Similar tendencies are also evident in other areas of the globe.

Basically, there are four general classes of recycling techniques:

• Primary recycling, i.e. conversion of waste into materials having properties equivalent to those of the original materials;

• Secondary recycling, i.e. conversion of waste into materials having properties inferior to those of the original materials;

• Tertiary recycling, i.e. conversion of waste into chemicals or fuels, and

From the viewpoint of material utilization, it is usually preferable to achieve the highest level of recycling possible, e.g. secondary better than quaternary recycling. However, from an economic and resource utilization perspective, this need not always be the optimal scenario. Secondary recycling might require excessive amounts of energy and other resources (e.g. facilities, manpower, additives, additional energy, etc.) whereas quaternary recycling may be simple and not require energy or any additional resources.

Primary, secondary and tertiary recycling processes all involve collecting materials, identifying them, reclaiming the remnants and then marketing them. For this process to be justifiable economically, the value of the reclaimed materials must of course be higher than the cost needed to recycle them.

An example of a typical current recycling scenario when it comes to insulators is secondary recycling of porcelain insulators as fillers for concrete or roads after being treated in hammer-type grinders. In the case of glass insulators, secondary recycling is even more viable. Composite insulators, by contrast, cannot easily be dismantled and re-processed for use in new products. Cost and environmentally efficient approaches for primary, secondary and tertiary recycling of them are therefore not yet feasible and only metal fittings can effectively be recycled. As a result, apart from metal recovery, quaternary recycling (i.e. incineration with recovery of energy) has been the most effective way to treat composite insulators at end-of-life. At the same time, it should be noted that using polymeric waste as fuel for generating power or heat benefits from the fact that these materials have a high energy content to release.

Due to the massive quantities of insulators, apparatus and other line components that will need to be replaced in the near term, there will clearly be a need to find clever recycling or re-utilization options. Achieving this goal will also contribute to greater sustainability of power transmission and distribution systems as a whole.

In 2006, INMR visited a unique facility whose main goal was to recondition and/or recycle components such as insulators, removed from lines. The Re-cycling Center and Materials Management Depot in this case belonged to Companhia Energética de Minas Gerais (CEMIG) – a large utility based in Brazil. Because of the scale of its vast service area, CEMIG established the facility to deal with the many thousands of components removed each year from across its network. This logistics and materials storage depot, located in Belo Horizonte, operated a program whereby a high proportion of used components, particularly insulators, switches and fuses, were restored to a condition where they could again be used on the network.

Incoming items were sorted and triaged to separate out those items that are fit for reconditioning and reuse from others which are clearly no longer useable on the network and therefore suitable only for re-cycling of their basic raw materials. For example, in the case of glass insulator discs, these arrived in a wide variety of possible conditions, from those which had already seen many years’ service to units that were still relatively new but which had to removed due to isolated events such as fallen poles. After scrubbing the glass shell with an abrasive sponge and blasting the metallic cap with tiny fibreglass balls to remove surface rust or algae, a used disc regained the appearance of a new insulator. Moreover, because the glass shell was intact, there was no need for electrical testing and the insulators could be packed into crates to be sent out for reinstallation on the network.

This same process was repeated for porcelain discs except that prior to re-crating, each unit was tested for internal punctures at an electrical test station adjoining the reconditioning area.

Not every glass disc arriving at the facility could be cleaned for subsequent reuse. For example, insulators operating for years near a fertilizer factory had become so coated with pollution that no amount of scrubbing could remove the contamination layer. In this case, the only solution to restore these insulators for further use involved washing and then coating them with RTV silicone – a procedure which essentially covered the pollution in a thin hydrophobic layer and restored electrical performance.

The process of recycling insulators also applied to related components such as switches and fuses which were typically cleaned, repaired and tested before being sent back for reuse on the network.

Whenever any components containing porcelain were identified as cracked or punctured and no longer of use on the network, the ceramic material was separated from metallic hardware and recycled into building components. Metal fittings and any lead from these units were sold to local scrap dealers. For example, on one day alone about 5000 kg. of lead could be removed from porcelain fuses and recycled through this process. Such systematic work in evaluating, restoring and recycling incoming used electrical components made this faciity among the most advanced of its kind anywhere.

Surge arresters are also an important line component in CEMIG’s service area which has one of the highest isokeraunic levels in all the Americas. Extensive use of polymeric-housed MV & HV arresters has brought forward a new issue from the point of materials management, namely how these units can best be recycled at their end-of-life. Indeed, one of the criteria determining future use of all types of polymeric components by CEMIG will probably be how effectively they can be recycled as well as the related environmental impact.

Production of porcelain insulators has historically been scattered widely throughout the world. Generally, development of this industry in any one region has depended on two key ingredients – an abundant supply of clay and the entrepreneurs prepared to invest in transforming this material into electrical insulation products. And perhaps nowhere else are these two factors in more abundant supply than in the city of Liling, China. Located just south of Hunan’s capital, Changsha, Liling has been bestowed with high quality clay that has made it an ideal place for manufacturing porcelain, dating back 1700 years to the era of the Eastern Han Dynasty. By all accounts, there are many dozens – even hundreds – of different porcelain insulator manufacturers officially registered with the local government and probably an equal number who operate ‘below the radar’. Together, these multitudes of plants supply porcelain for every low, medium and high voltage application.

With such a large population of suppliers, one might expect that landfills in the area would be ‘bursting’ with tens of thousands of pieces rejected each year because they do not meet quality requirements. Yet a far more environmentally friendly solution has emerged. Factory rejects are left by the sides of roads and quickly recycled by local residents into building applications of every sort, from structural supports for terraces, roads and balustrades to pillars that hold up sheds.

In fact, they have become so fundamental to local culture that one even finds them intertwined with the city’s religious life and observances. For example, a temple high in the mountains overlooking Liling has traditionally had a day where local farmers come to a ceremonial well to pray for abundant rain for their crops. The well, known as ‘dragon well’ because of the dragon’s head in the small shrine, is adorned by a display of insulators. 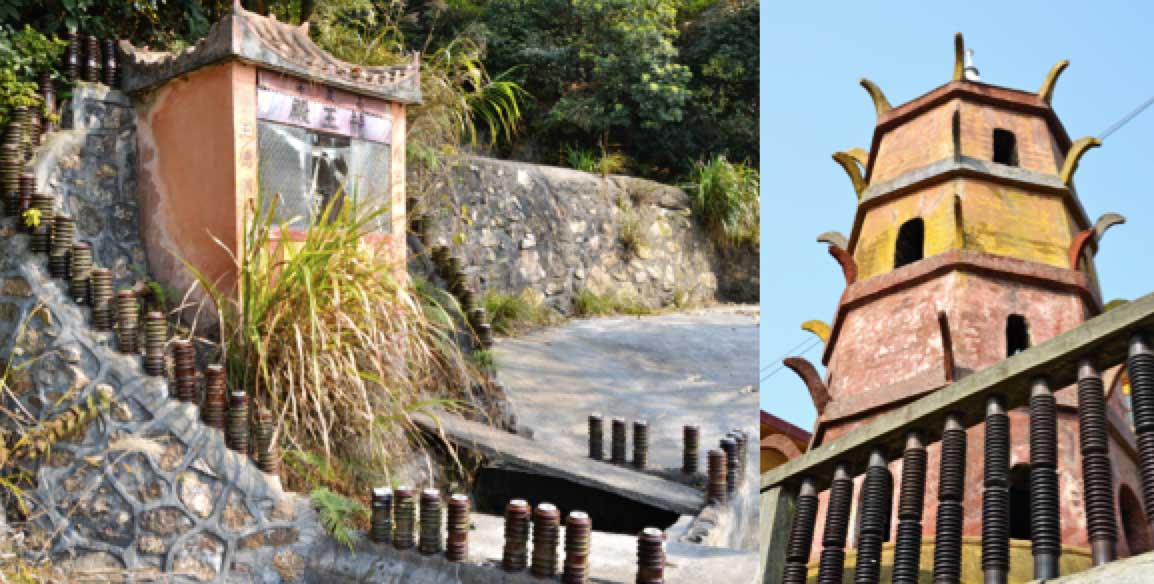