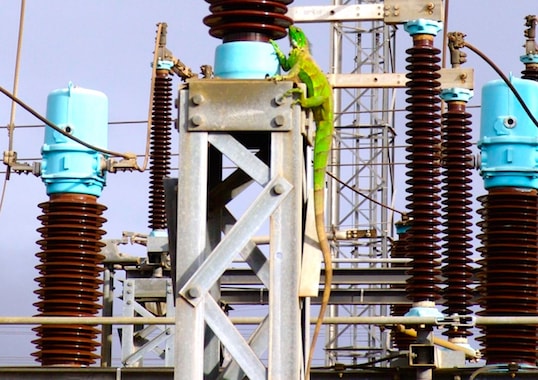 One morning last week, a vervet monkey managed to clamber across the roof of a power station in Kenya and drop onto a transformer, causing a trip. This made other machines at the site trip on overload – all culminating in a nationwide blackout that affected close to 5 million households and businesses. Power was restored to some sections of the country within 15 minutes but many other customers had to wait much longer. While the affected power installation was said to be secured by electric fencing to keep out marauding animals, this was obviously not sufficient.

Indeed, one of the most vulnerable links in many power networks are the many interfaces between overhead lines and substation equipment with the animal kingdom – specifically birds, reptiles and a host of predatory or scavenging mammals. Taken together, these creatures present a constant threat to the safe operation of key network assets. In the case of bushings, for example, shock waves from a wildlife-induced flashover can blow their porcelain housings into high velocity shards that cause even greater damage. Given such risks, a broad range of wildlife protection devices has been developed to reduce the scale of the problem. In 2013, INMR talked with key suppliers in this business to identify key factors that determine effectiveness of such products.

Economies worldwide suffer many hundreds of billions worth of losses each year due to unexpected disruptions to electricity supply. Moreover, data gathered in the U.S. during the late 1990s suggest that about 12 percent of such disruptions result from interaction of wildlife with energized lines and equipment. If outages classified as ‘source unknown’ are factored in (some two-thirds of which are thought to be wildlife related), it is clear that wildlife interaction events have serious economic impact.

Moreover, the risk of these types of outages is only growing as industry efforts to reduce cost, save space and make electrical infrastructure less visible through compaction reduce distances that need to be breached to create faults. Large birds preparing to take off can have wingspans of over a meter while snakes reach much longer lengths. Given the above, one might expect that the majority of installations in the voltage range where clearances are most at threat, i.e. 5 kV to 66 kV and in areas where wildlife are abundant, would be equipped with special protection devices. However, according to the industry supplying such devices, the incidence of their application is still estimated at only some 20-25 percent.

In recent years, several factors have begun driving growing interest in such products, particularly in North America. Foremost among these are efforts to maintain high system reliability by eliminating preventable causes of frequent power disruptions. For example, during one year alone, a large electricity supplier in the State of Mississippi documented over 1100 wildlife-induced outages, together resulting in 565,000 customer-minutes of interrupted service. A second factor, whose importance varies by country and region, relates to the potential for costly lawsuits and penalties should protected species be electrocuted during phase-to-phase or phase-to-ground contact. In the western U.S., for example, one of the largest electric utilities pleaded guilty years ago to illegally killing golden eagles and other migratory birds, resulting from accidental electrocutions in proximity to some of its rural lines. The utility was ordered to invest heavily in system upgrades intended to protect these birds. In fact, limiting such problems was the goal behind the set up of a group called the Avian Power Line Interaction Committee (APLIC) that provides information to help reduce bird electrocutions.

Finally, the basics of asset management suggest that the consequences of animal interactions with energized structures are not just power interruptions and potential fines but also damage to costly equipment. Indeed, industry experts claim that risk of such damage at vulnerable substations could be reduced by from 60 to 80 per cent through selective application of well-designed wildlife protection products. That makes any cost-benefit analysis tip heavily in their favor.

The various wildlife protection devices offered on the market have different designs and are made of a range of different polymeric materials. One of the keys to performance is fit. This can best be achieved if they are customized to the shape and dimensions of the equipment to which they are being applied. “Precise fit is essential in this business,” says one supplier. “Power arcs travel through air, meaning that the gap between the creature and the live fitting is critical. Any crack or seam in a protective covering can allow the arc through and the higher the voltage the greater this risk.” Wildlife behavior also requires a tight fit to achieve best long-term results. For example, bird nesting on lines and at substations attracts predators such as cats, snakes, iguanas and possums that can push aside a loose fitting cover as they move toward the nest.

Materials themselves are also important and one of the goals behind IEEE guidelines for application of these products was to assure that wildlife protection devices would not themselves create problems over the long-term. Among the key considerations when it comes to composition of materials used in wildlife protection devices is suitability to an outdoor environment of electric field combined with persistently high UV. Materials themselves must be inert and resistant to tracking and erosion because they will face much the same issues as insulators – including dry band formation that can leave carbonized dots on the surface and cause tracking. Users are advised that they must look at the tracking and erosion performance as well as UV test data for any wildlife protection device they consider installing. It is also essential to ensure that whatever latches attach such devices to the equipment they protect must not become brittle, rotted or eaten up over time. If that happens, the devices will simply break off or become dislodged under wind.

In the past, many wildlife protection devices tended to be made of PVC or EPDM but some suppliers have developed customized silicone rubber blends that offer ozone and fire resistance as well as good stability and that are better suited for power industry applications. These are offered as extruded sheets that can be templated to fit whatever equipment is being protected or pre-molded in the factory to specific shapes. Silicone tape is also available in a thickness allowing an equivalent 15 kV insulation per layer. Other suppliers rely on a polyurea formulation that is robust as well as flexible for easier fit.

Apart from material, which has to be durable enough to last at least 5 to 10 years on distribution line applications and more than twice that in the case of substations, another key element of wildlife protection devices from the user perspective is speed and effectiveness of application. The former factor is especially important if an outage is needed to install them. In this regard, designing protective devices for precise fit not only offers higher performance but also translates into typically lower installation times. Moreover, hot-sticks have been developed that allow wildlife protection covers to be installed with equipment still energized. Indeed, the difficulty scheduling outages has been among the reasons why many substations are left unprotected against wildlife intrusion. New live installation techniques are therefore likely to translate into higher market penetration levels for such devices. Ideally, suppliers must co-operate with the customer to develop a site protection plan intended to identify potential problem areas and customize the solution for these different applications. The clear trend in wildlife protection is toward devices that can be installed without de-energizing equipment.

Another trend in the business is growing sales of wildlife protection devices directly to manufacturers of transformers, arresters, reclosers, etc., so that such equipment is already equipped with these at time of purchase. There is a word of caution, however, since many OEMs these days are more focused on costs than on wildlife protection. As a result, caps supplied factory-installed on equipment can sometimes be sourced from companies with little experience in wildlife protection and that will not stand up over the long-term.

“The OEM’s real business is selling equipment, not the wildlife covers,” says one expert in this industry. “Therefore they probably source these based on what the customer specifies.”

Most in the wildlife protection business discount alternative techniques such as sonic emitters or other electronic devices intended to discourage birds and animals from entering electrical installations. Rather, they believe that creatures become conditioned to and eventually ignore them. The real alternatives to improved wildlife protection of equipment rely instead on restoration schemes and relays or reconfiguring structures to achieve extra spacing between the phases and phase-to-ground. But the latter approach to the problem is costly and reducing the wildlife interaction problem can probably best be accomplished by equipping vulnerable lines and substations with specialized protection devices.

June 28, 2019 Comments Off on Standards & Progress in Insulator Technology