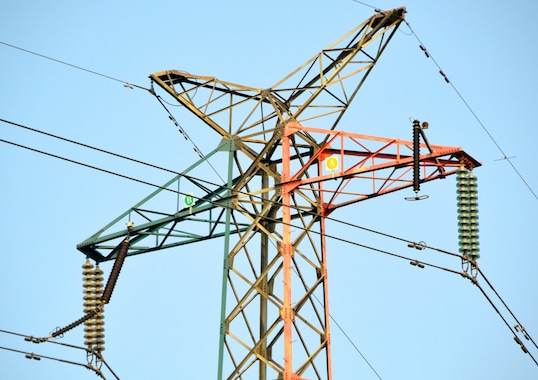 The urban area of Shenzhen is located in the south of Guangdong Province facing the South China Sea. This puts it squarely in a sub-tropical region with an average of some 70 thunderstorm days each year. Lightning activity is focused between April and October and can be especially severe, lasting for prolonged periods and with high ground flash density as well as high peak currents. Several years ago, INMR reported on a program by local power authorities to mitigate lightning outages on 110 kV and 220 kV lines by selectively installing externally gapped line arresters.

Electricity supply in Shenzhen is the responsibility of the Shenzhen Power Bureau (SPB), a part of the China Southern Power Grid – one of the two main grid operators. SPB operates a growing transmission system comprising numerous 110 kV and 220 kV lines that traverse the spines of the region’s steep terrain. High local isokeraunic levels combined with poor ground resistance of the coarse, rocky soil on which towers are sited means that many lines are particularly vulnerable to the impact of periodic lightning strike.

Indeed, impact of lightning on SPB transmission lines has traditionally been high and in the past accounted for as high as 60 percent of all outages recorded on the HV network. For example, according to published reports, between 2004 and 2007, transmission line outage rate in Shenzhen varied from 2.77 to 3.88 per 100 km – a level generally regarded as unacceptably high. It was with a view to reducing the extent of this problem that engineers at SPB embarked on a program to equip some of the most problematic line sections as well as most exposed towers with line arresters having an external gap design. Arresters became the preferred choice since, in most cases, alternative solutions for lightning mitigation were not considered practical given the difficulty and expense of lowering the high grounding resistance in mountainous areas.

In order to make the program most cost-effective, the installation process began with identifying which specific lines were most at risk, based on past lightning strike data and related outage statistics. Moreover, other factors were also considered, such as the extent to which towers were prone to shielding failure or whether there was any possibility to avoid problems by increasing insulation levels while still respecting tower clearances. For example, in order to optimize arrester investment, the policy was that in those cases where grounding resistance was low, EGLAs would be installed on the upper phase or on both side phases. However, when the grounding resistance was high and difficult to lower (e.g. as in the case of towers whose foundations sit on rock) or where lightning activity was severe with high risk of shielding failure, EGLAs would be installed on all 3 phases of the conductor.

Installation of arresters on the most vulnerable line sections and towers of Shenzhen’s transmission network resulted in significant improvements in service performance. For example, local engineers point to one 220 kV line where there were at least 2 lightning related outages each year before the arrester program began. Subsequently, however, no lightning outages were recorded even though special counters installed on the arresters indicated ongoing lightning activity on towers. Similarly, one formerly troublesome 110 kV line that had experienced several outages attributed to lightning also saw improved performance even as counters indicated numerous cases of arrester activity. Indeed, more than decade after the program first began, there have been only a handful of lightning outages reported on those towers equipped with the EGLAs and together these represented less than 3 percent of all transmission line outages. In one case, for example, the SPB’s lightning position system showed that the lightning peak current was 150 kA while the grounding resistance of the affected and neighbouring towers exceeded 25 ohms. The resulting outage was then found to have been due to too large an air gap because of improper installation of the series insulator arcing devices. Other defects affecting line arresters were found to include dropped leads on arrester counters or unexpected re-positioning of the discharge ring.

Shenzhen’s power network continued to expand rapidly in the years following start of the arrester installation program with new transmission lines added each year. With this type of growth, it was not seen as practical to equip all with arresters. Instead, the plan has been to continue to selectively install EGLAs based on a review of yearly lightning outage statistics.

July 28, 2018 Comments Off on Changes Coming to Insulator Standards