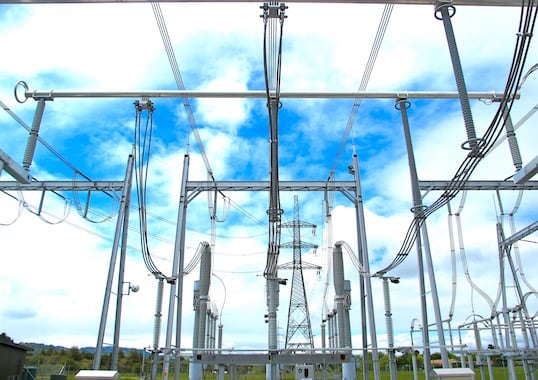 A novel under hung busbar design was developed several years ago and tested jointly by Transpower, the transmission grid operator in New Zealand, and Electropar, a local supplier of network hardware and components. According to Transpower engineers, the concept offers significant benefits over conventional designs, including reduced land requirements as well as less building costs, extended maintenance cycles and easier accessibility for repairs. INMR travelled to the Drury 220 kV switching station near Auckland late in 2010 to report on implementation of this new system.

At first glance, Drury Substation on the outskirts of Auckland appears a typical switching station, in this case bussing circuits from two 220 kV lines to supply 150 MW for New Zealand’s largest city. However, closer inspection reveals that this substation is far from ordinary. In fact, Drury is not only one of New Zealand’s newest transmission substations but also one where a unique busbar scheme has been put into operation. Archana Devi was Project Manager for Drury and reported that the substation, built at a cost of about NZ$ 15.6 million, was commissioned at the end of April 2010 – 9 months after construction began. Said Devi, “this substation is state-of-the-art in terms of layout, spacing and safety distances. It’s also unusually open and relies on fewer components than similar substations.”

Andrew Renton, Transpower’s Asset Development Engineering Manager at the time and Cameron Wallace of Electropar were both closely involved in the development and testing of the station’s busbar concept. “If you look at Drury,” observed Wallace, “there were a lot of ‘firsts’ – not only for New Zealand but for the rest of the world. These innovations have come from a conscious effort by management to look for improvements based on operating experience. This whole process culminated in a revolutionary design, which will now become the model on which future substations in this country will be built.” Wallace and Renton explained that successful implementation of the unique under hung busbar system relied primarily on two factors: the first was an innovative application for composite post insulators while the second was development of unique disconnect clamp. Both were seen as key requirements in eliminating the usual bus side disconnector one would usually expect to find in a switchyard.

In regard to insulators, Wallace stressed that the whole concept relied on having a light insulator attached to the bus. “The key advantage of polymers in this case was reduced weight and also the self-damping effect built into them. This design would never have been possible using porcelain since the busbar would have to be dimensioned much larger in order to withstand normal short circuit forces. If that additional weight – in this case 80 kg more per insulator – had to be taken into account, the entire concept would become impractical.” Wallace also explained that engineers considered various alternative configurations for the insulators, including a V string, but were worried about possible swaying. Therefore polymeric posts were selected to support the flat profile conductors. The critical requirement in regard to their performance was that they be sufficiently rigid to assure no secondary faults under short circuit events. A second requirement, according to Renton, was for a single-piece molded design with as few interfaces as possible and with a fitting designed so that water would run off and not pool at either end.

Yet another consideration was keeping the suspended insulators as short as possible while ensuring good service performance given the station’s relatively high pollution environment. “As you go toward longer insulators,” said Renton, “the whole construction has to be higher and this is detrimental both for visual impact and seismic considerations. These insulators are actually quite special,” he added. “With a pitch circle diameter of 5 inches (12.7 cm), they offer relatively high stiffness while at the same time sufficient specific leakage distance (31 mm/kV) to meet the minimum requirement for this area. In the end, achieving this came down to finding the optimal shed profile.”

In fact, Transpower engineers were so pleased with the composite insulators ultimately selected that they wanted to use the same technology for the posts that support the tubular bus. However, Renton reported that no insulator supplier could be found at the time that would guarantee the required mechanical withstand. Therefore there was no choice but to use porcelain.

Renton explained that application of such phase-to-phase insulators is quite rare at substations where the more typical requirement is for phase-to-earth insulation. But he added that Transpower has already had experience with this same concept at another switching substation in nearby Huapai. There, land restrictions prevented erection of a typical entrance gantry and led to phase-to-phase insulation being employed to allow conductors to drop vertically into the station. Said Renton, “for us, the fact that these insulators are being used on a bus versus on an overhead line means that if one fails, it will take down the station through a bus fault.” Concern over such a serious outcome resulted in a substantial testing effort to validate the concept, conducted first at Electropar on models and later on a full-scale set-up at a high power laboratory in western Canada. “The final configuration passed testing for 3 seconds at a fault level of 40 kA,” noted Wallace, “and then again at 63 kA for one second.”

Apart from the custom-designed composite post insulators used at Drury, the second key requirement behind the under hung busbar concept was a means to easily disconnect any circuit for maintenance. The clamp developed at Electropar for this purpose was designed to be operated with a hot stick and to lock onto any flexible conductor, whether single, double or quad. According to Electropar’s Engineering Manager, Greg Barclay, the disconnect clamp quickly accesses bolts from below the bus, utilizing a socket fitting and is so clever in design and function that it has been patented. “Transpower gave us the basic concept,” he said, “and our task was to turn this into a tangible product to replace the current solution of someone standing on an elevated platform.”

Barclay went on to state that the key to making this solution practical was plenty of available working space for maintenance personnel. Indeed, Wallace and Renton pointed out that one of the key benefits of the new bus concept is that it results in an open, uncluttered switchyard. Said Wallace, “in terms of ease of access, it’s perfect since maintenance staff can position their vehicles and work directly below the bus or, if necessary, extend a boom to work on the breaker.” He also observed that the uncluttered Drury layout contrasts with the situation at most large substations, where conventional bussing usually means a dense arrangement of station posts, foundations and concrete pads.

Apart from the convenience that derives from Drury’s open layout, an even more important benefit is prolonging the normal interval between maintenance. “If you look at this HV isolator,” remarked Wallace pointing to the disconnector on the breaker side, “such equipment must typically be maintained once every 5 years to align and clean the contacts. This means that need for a bus outage is determined solely by the maintenance cycle for this apparatus and this results in less grid availability. By omitting the isolator entirely and relying instead on a disconnecting circuit breaker with a normal 14-year maintenance interval you effectively shift the maintenance cycle from 5 to 14 years. In effect, the busbar itself, not the isolator, now drives the maintenance cycle.”

Wallace also explained that whenever maintenance is required, all that needs to be done at Drury is to drop the under hung conductors to the ground without need for a bus side disconnector. “This is a key issue for power supply companies worldwide,” he emphasized, “namely how to optimize maintenance intervals in order to improve availability.” Wallace regarded this as a step to smart design of power grids. “The smart part here is that you no longer need to put out switching, isolating and temporary earthing to make a defined work area. All that’s needed is a hot stick and the new clamp.”

As novel as Drury is in terms of design, Renton pointed out that it only a step forward in an ongoing process that will eventually see less cluttered substations with correspondingly less HV equipment. “The first thing to disappear,” he predicted, “will be disconnectors. But over time the CTs will go as well, replaced by optical CTs without pedestals. All that will be left will be the disconnecting breakers, both live and dead tank. And everything will feature composite insulation. In this regard, Drury is not solely an innovation but the start of a whole new generation of substation design.”

Finally comes the important consideration of economics. Clearly, the engineering and other innovations at Drury carried with them incremental engineering costs. Here, Renton and Wallace pointed to the direct savings, which they claim outweighed the amount invested in this design concept. Said Renton, “while the under hung busbar system cost us about NZ$ 600,000 – of which about $130,00 was spent on testing – it immediately saved us six sets of disconnectors at Drury as well as all the normal bus support posts and foundations of a conventional design. These capital savings alone helped pay the development program.” In fact, he noted that the economics of the solution used at Drury was never the ‘hard sell’ to management. Rather, it was the technical arguments that needed to be made. But even here he stated that the risk was seen as low since there was always the option of a retrofit. “And any concern about this never having been done before,” he pointed out, “was eliminated by our testing program.”

Apart from the changes in terms of switchyard layout, the control room at Drury also features some of the latest substation technologies. According to Project Manager Devi, the interlock scheme of the disconnectors is of a ‘smart’ type that uses relays and state equations in place of mechanical interlocks. Said Devi, “instead of many pieces of code, we can use only 5 or 6 equations regardless of substation configuration. The interlock scheme is independent of substation bus arrangement whether single, double or any other arrangement of the switchgear. For us, as operator, it offers the same look and feel of a conventional system but with the benefit of smart electronics. The logical next step will be to go to optical CTs.”

Devi also noted that the cabinets at Drury are solid state with comparatively little wiring. Moreover, they have been tested for seismic performance and found to be robust enough to stand up to most earthquakes through their special system of bolts and washers.

Reviewing all that has been accomplished here, Electropar’s Wallace observed that this is the start of an entirely new look for substations driven by a new generation of engineers. “These people are not afraid to innovate,” he remarked.” Rather, they are anxious to take advantage of what the insulator industry offers in terms of better technologies. It’s really a case where these new materials have finally caught up with the power industry’s own application goals.”