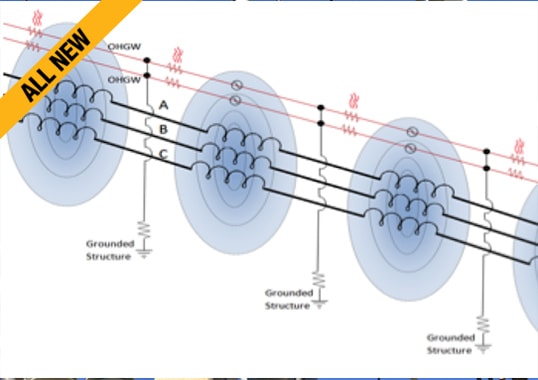 Power systems experience losses in many forms and much effort is devoted to reduce these. However, losses related to overhead ground wire (OHGW) on transmission lines are rarely mitigated for systems below 345 kV. These losses are due to inductive currents from the phase conductors onto the OHGW (or shield wire). Induced current is but a few amps but is all lost power since lines are generally connected to earth at many points. Over the life of a transmission line, such losses can be substantial but these can be eliminated if surge arresters are used to replace OHGW.

Arresters have long been used in conjunction with OHGW but seldom have replaced it entirely since this is mostly unfamiliar territory for line design engineers. This article, based on a contribution by INMR Columnist, Jon Woodworth, at the 2013 INMR WORLD CONGRESS, aimed to quantify the potential to reduce losses by eliminating OHGWs and to demonstrate the capability of arresters to survive in this environment.

OHGW losses generated by induction from phase wires (as shown in Fig. 1) is not a new phenomena and has long been understood. Yet these losses have mostly been ignored because they are much less than heat losses of phase conductors due to their inherent resistance. The solution for loss reduction of phase conductors is to increase the amount of conductor, which lowers the resistance and heat generated. But such a solution would clearly not be cost effective for OHGWs.

Losses from the OHGW are a function of several variables. First and foremost is proximity relative to phase conductors: the closer to the phases, the higher the losses. A second important factor is current amplitude flowing in the phase conductors. Losses are in direct proportion to load current and a function of the square of the OHGW current. This means that losses are less for lightly loaded lines whereas for lines that carry two normally loaded circuits or one highly loaded circuit losses can be much higher. A third factor is resistance of the shield wire. The higher the resistance, the higher the losses and in this case losses are a linear function of resistance. The equation W= I2R calculates losses on the shield wire once current is known. A simple but significant additional variable is number of shield wires. If two are used, depending on configuration, losses could be as much as double that for a single shield wire. By contrast, variables that have no effect on losses from OHGW are height above ground, span length and phase conductor size.

To determine current induced in an OHGW, the Alternate Transient Program (ATP) was utilized and the line was modeled using a Bergeron transmission line model. Fig. 2 shows the ATP circuit used for the model. The lines of most interest for such an analysis are 345 kV, 230 kV and 115 kV because these represent the majority of systems used in the United States. Also, line segmentation is used to mitigate losses for systems greater than 345 kV so such lines are not considered here. Fig. 3 shows a sampling of the lines configured and modeled. In the model in Fig. 2, the LLC represents a 1-mile segment of line and is responsible for determining induced current on the OHGW.

Results of the loss simulations are shown in Fig. 4 as losses in watts/mile. It can be seen, for example, that tower and line configurations of double circuit lines have far higher losses than single circuit H-frame configurations. Since losses are experienced over the life of a line, the proper way to quantify them is to use a Net Present Value (NPV) calculation that converts the total losses into a present value taking inflation and cost of money into account. Variables used in this NPV calculation are: Life = 30 years, Return on Investment = 10%, Present cost of energy = $50/MWhr, Energy Cost Inflation = 3%. NPV losses are shown in Fig. 5.

Results of this analysis show that, for heavily loaded double circuit lines, the savings can be substantial. By contrast, for single circuit H-Frame designs with OHGWs, savings are marginal. Still, the basic questions to be answered are: can the savings justify the cost of arresters and are arresters able to perform as a replacement for OHGW?

One of the questions many line designers will ask when considering using transmission line arresters is: ‘Will these last?’ This suggests there is lack of familiarity with the capability of arresters in general. In the 2012 publication of C62.11, the IEEE’s standard for testing arresters, tests to quantify the energy handling capability of arresters was modified based on studies carried out by CIGRE Working Groups A3.17 and A3.25. In the CIGRE work, arresters of several types and from different manufacturers were tested to failure using surges of single high magnitude impulses. Results showed that the single surge withstand capability of an arrester can be quantified and measured repeatedly. The new test and arrester rating is called the ‘Single Impulse Withstand Capability Rating Test’ and there is also charge transfer of an arrester – a unique, new unit of measure for arresters.

The charge transfer capability of an arrester, measured in coulombs, is defined as where |A| is the absolute value of impulse current in amperes and t is the duration of the event in seconds. This characteristic removes the discharge voltage variable that in the past hindered direct comparison of arresters and lightning. Now that arresters will have such a charge transfer rating, the probability of failure can be more accurately calculated. For example, if an arrester has a single impulse withstand capability of 3C, any accumulation of charge above 3C during a surge means there is high probability of failure. When standard arresters classified today are tested to this new charge rating, results will show typical charge transfer ratings (as in Fig. 6). With this new data in hand, arrester capabilities to typical lightning discharges on a transmission lines can be compared.

In the past, arresters have been tested with several different types of surges, all chosen because they could be re-created by the various test labs around the world. These test surges, however, did not necessarily represent actual charge magnitude of lightning. Waveshape and charge magnitude of lightning surges have been measured in several studies over the years and are summarized in Fig. 7. The fundamental parameters relative to surge withstand capability is the magnitude and duration of the surge as well as the charge contained therein. According to this table, a median surge of 31kA and waveshape of 5/80us results in a charge of 5C. Extrapolating to 100 kA, which is considered a realistic current with occurrence less than 5% of the time, a charge of 16C would be transferred during an initial stroke. Using a 16C, 100 kA, 5/80us surge as a realistic maximum, such a lightning stroke was applied to a transmission line model and the results are shown below.

A transient analysis study was completed with ATP using realistic lightning surges and transmission line parameters. The 230 kV circuit consisted of 50 plus towers, each fitted with arresters on all phases. For this study, a direct strike to the phase conductor was located at the top of Tower 0 and the effects of the surge were measured at all towers in both directions. For simplicity, results only show the tower struck as well as 4 others in one direction. It is assumed that, during the strike, there are no insulator flashovers. To determine the fundamental effects of known variables on a system, variations in ground resistance, span length, arrester rating and current level were all modeled. Results are shown in Figs. 11 through 13.

The distribution of current and charge along the system given a strike of 100 kA can be seen in Fig. 9. It is interesting to note that the current amplitude through the arrester on the struck phase of Tower 0 is significantly different than the stroke current, even though the amplitude is about 90% of stroke current. The surprising data from Figs. 9 and 10 are that even though lightning strikes at the top of tower 0, charge transfer of the arrester on this structure (for the phase struck) is only 12.5% of total stroke charge. The sharing between towers and arresters on the same phase is significant and good news for the arrester because it means a higher survival rate if hit by a direct strike.

Effects of practical variables in the construction and operation of a transmission line were also examined. The first variable checked was the effect of strike current on current and charge sharing. From Fig. 11 it can be observed that only the amplitude of the current changes at each tower; charge sharing remains constant otherwise. The ground resistance for this evaluation was 20 ohms at each tower, the arresters were 140 kV MCOV and the span distance was 0.15 miles.

When span distance is changed from .05 miles to 0.2 miles (as in Fig. 12), current sharing is still good. The maximum charge at T0 is 2.25 coulombs and, by Tower 4, the charge is approximately the same at all span lengths. The surge current for this test was 100 kA, the ground resistance was 20 ohms per tower and arrester ratings were all 140 kV MCOV.

Fig. 13 presents results of adjusting ground resistance for towers. To demonstrate the worst case, the resistance at T0 was maintained at 20 ohms and resistances on all other poles were increased. Span distance was 0.15 miles, lightning current was 100 kA and arrester ratings were 140 kV MCOV. The current sharing now is not as good as in other cases. If there is a difference of 80 ohms between the tower struck and the rest of the towers, the charge transfer through the arrester at T0 is more than 3.5C. In reality, it does not seem likely that all other towers could be so much higher than one tower unless the ground resistance was reduced on purpose. It seems that a rule of thumb for applying arresters in place of shield wires would therefore be to make no attempt to reduce tower footing resistance to low levels, as is common today. If all towers were allowed to float high and remain similar in resistance, charge sharing would be better.

To summarize, from this charge sharing evaluation it is clear that significant sharing occurs during a direct strike to the phase conductor. This sharing is beneficial since it reduces the stress on the arrester on the struck tower. For most variations in parameters, current sharing is broad enough to keep the charge through the arrester on the struck tower at less than 12%. It is also interesting to note that evaluating arrester ‘survivability’ using charge is much easier than using energy or current. 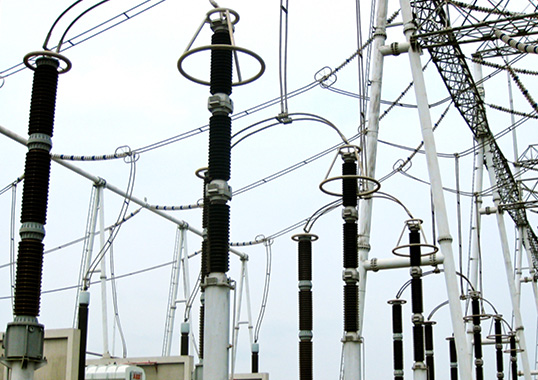 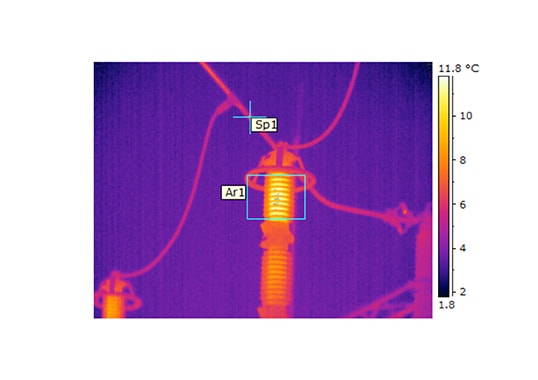 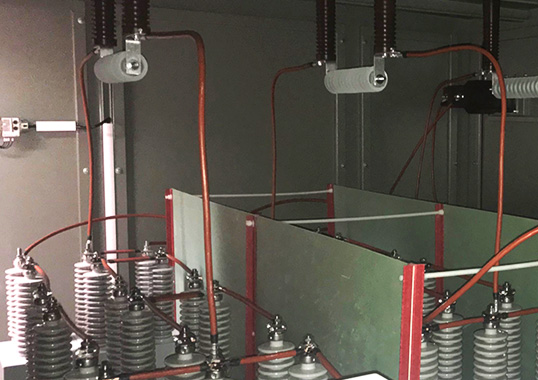 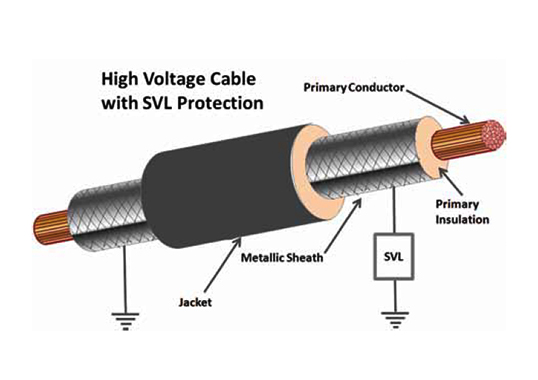