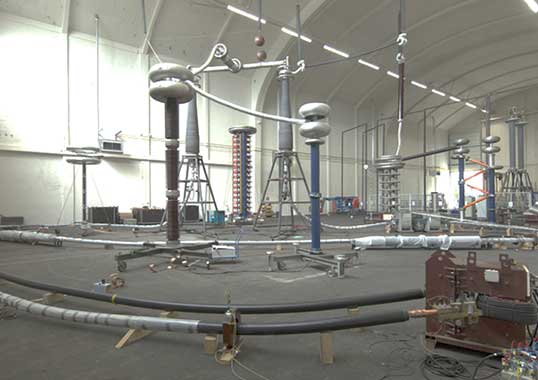 There are two unique test requirements in testing a high-voltage direct-current (HVDC) cable system compared to high-voltage alternate-current (HVAC) cable system: a specified maximum temperature drop across the insulating layer of a cable (Δθmax) and a superimposed impulse withstand test. This is the focus here, based on practical testing experience. The temperature difference Δθmax  (excluding the semiconducting screens) is provided by cable manufacturer depending on insulating material (e.g. XLPE: cross-linked polyethylene) as well as cable design. This temperature difference needs to be maintained in a specified limit during a stead state of a load cycle. In practice, it is not possible to measure Δθmax  directly. By applying heat transfer theory, a simple formula is introduced to calculate Δθmax. A superimposed impulse withstand test is essential for a HVDC cable system to be qualified for two HVDC converter technologies, i.e. Line Commutated Converter (LCC) and Voltage Source Converter (VSC).

This edited 2017 contribution to INMR by Hong He and W. Sloot of KEMA Labs in the Netherlands, presented a laboratory test set-up for switching/lightning impulse (SI/LI) voltage superimposed on a HVDC voltage. A universal divider was introduced to measure combined stresses for HVDC cable system.

In HVAC cable, electric field distribution depends on capacitances that are dominated by permittivity of the insulation material. Since this permittivity is quite stable with temperature, a specified is not required when testing HVAC cable. By contrast, field distribution in HVDC cable is determined by resistivity of insulation material. Moreover, this resistivity varies greatly with temperature. This results in a need to control temperature difference Δθmax  during the thermal stresses represented by the load cycle in a test. HVDC cable in operation experiences SI/LI overvoltage as well, which is superimposed onto a DC service voltage. In order to simulate the in-service condition, there a switching surge and a lightning transient superimposed on an operating DC voltage is a standard requirement. Below describes a test circuit with two separate test systems (a DC generator and an impulse generator), connected to one another with a test cable system located in-between. The test cable system consists of three pieces of HVDC XLPE cable (50 m in total) assembled with two outdoor terminations and two joints. A major complexity is to prevent damage to each high voltage test system due to presence of the other. Therefore, a sphere gap was installed to block DC voltage from the impulse generator; a damping impedance set protected the DC generator from very fast transients.

Consequently, a temperature difference arises across the cable. The temperature distribution inside the cable can either be measured by thermocouples or calculated by a numerical model. Fig. 1 is a diagram of an equivalent thermal circuit for a cable.

Temperature difference across conductor screen, insulation and insulation screen is calculated as

θis, and θc were measured directly by thermocouples. So, overall temperature difference from conductor to insulation screen is:

In conclusion, Eq (5) is the simple formula for calculation of Δθmax. Obviously, the surrounding also plays a role, thus the main temperature drop in a cable is between the cable surface (sheath) and environment (θs – θamb). In order to control Δθi within the limit of Δθmax, external thermal insulation material (e.g. plastic bubble) is applied to minimize influence of the environment. This thermal insulation material helps to adjust Ttm based on different cable design and surrounding condition.

In order to monitor the thermal environment of the HVDC cable system, thermocouples were placed at a total of more than 20 different locations on a reference cable and a test cable. The reference cable should be installed in close proximity to the test cable to ensure an equal thermal environment. The conductor temperature of the reference cable (based on rated maximum , e.g. 70°C) was monitored to guide the same current applied to the test cable simultaneously. By applying Eq (5), the specified Δθmax was calculated and monitored during the load cycle. A typical 24 hours load cycle is shown in Fig. 2.

Figs. 3 and 4 schematically demonstrate the cable cross-section (e.g. 2500 mm2) and the locations of the measured temperature respectively.

An experimental set-up included a DC generator, an impulse generator and a test object, which was a 320 kV DC cable system including HVDC XLPE cable (copper conductor and XLPE insulation, nominal capacitance of 0.26 µF/km), two outdoor oil terminations and two pre-moulded joints with shield interruption. A schematic test circuit and a photo of a real test setup are shown in Figs. 5 and 6 respectively. Each test system was equipped its own divider in order to measure DC voltage (Divider 1 in Fig. 5) and SI/LI (Divider 3 in Fig. 5) respectively. A combined divider (Divider 2 in Fig. 5) was applied to measure the superimposed withstand voltage subjected directly to the test object. A pair of spheres (diameter of 0,5 m, SG2 in Fig. 5) was installed in vertical position, the lower sphere directly fixed to outdoor terminations. The DC generator was also connected to the lower sphere with the protection water resistor (10 MΩ, R1 in Fig. 5) and the blocking impedance (35 mH, L1 in Fig. 5) in between. The upper sphere was separated from the lower sphere and the cable by an air gap and connected to the impulse generator. The surge arrestor (A1 in Fig. 5) was installed for extra protection of the DC generator.

Accurate measurement of voltage waveforms and self-ignition of sphere gap are the two essential aspects for a superimposed impulse test. By means of a sphere gap, this gap must ignite at a certain level and transfer the SI/LI to the cable system. The gap distance has to be considered and adjusted. Under the same polarity of two voltages (e.g. + UDC and + USI, a unipolar stress), the breakdown voltage of the sphere gap (Ubd unipolar = UDC – USI ≥ UDC , thus USI ≥ 2 UDC), in contrary to a bipolar stress (e.g. + UDC and – USI), the voltage (Ubd bipolar = UDC – (– USI) ≥ UDC , thus absolute USI ≥ 0). Therefore under the bipolar stress, there is not critical for breakdown the air gap; however under the unipolar stress, it is a complex procedure due to the Ubd unipolar. Moreover, these calibration steps are necessary to avoid overshoot of the test object. Distance of the sphere gap needs to be adjusted corresponding to the calibration of impulse voltages from low scales (50%, 65% and 80% of the test voltage) up to full-scale (100% of test voltage).

The three measured voltages were obtained with three dividers – D1, D2, D3 (see Fig. 5) – during testing. The DC voltage measured by Divider 1 via a digital voltage meter and the full scale of DC voltage should be 320 kV. The SI/LI voltages were ‘over-served’ by Divider 3 and the peak voltages should be 710 kV and 740 kV respectively (see Fig.7). DC voltage superimposes with same polarity of SI is shown in Fig. 8. It is further found that DC voltage superimposes with opposite polarity SI and LI in Fig. 9 and Fig. 10 respectively.

In Fig. 7, Divider 3 measured a spike in front of the SI wave shape, which is the time delay of the protection sphere gap, it was until over the breakdown voltage, then sphere gap was conducting and the cable system was connected at that moment to the impulse generator. As observed in Fig. 8, a systematic DC offset error occurs during the tests. Divider 2 was calibrated by DC voltage and impulse voltage respectively. For combined voltages, a correction factor is needed (i.e. a factor of 0,78). This offset leads to a difference of peak voltages of impulses measured by Divider 3 and Divider 2.

It was noticed that, once the arc between the spheres has ignited, voltage on the cable system followed voltage at the terminal of the impulse generator. Thus the voltage on the cable system in extreme short time (e.g. hundreds or thousands of µs) discharged via impulse generator to extinguish voltage of the arc (visible in graphs), then it would take short recover time (a few hundred ms) to recharge to the DC voltage (invisible in graphs due to limitation of data collection). In the meantime, the protection resistors sustained the full difference of impulse voltage and DC test voltage.

Calculation of Δ is obtained based on heat transfer method. In order to maintain a constant surface temperature of the cable, needed to guarantee a specified Δ, the practice methods are to control load current through conductor, maintain constant ambient temperature or apply the external thermal insulation material.

A proper test setup using a sphere gap has been developed for the application of SI/LI superimposed on a DC voltage. The correct gap adjustment is essential for unipolar stress condition, otherwise under certain circumstances, the high-frequency oscillations might occur.

Further experimental work will focus on a method of controlling cable sheath temperature, and developing new three-channel software with extended data capture time (up to recover time of DC voltage). Furthermore, a protection capacitor is another alternative to a sphere gap to realize the superimposed withstand test.

Materials Toward Insulators of the Future

September 21, 2019 Comments Off on Materials Toward Insulators of the Future