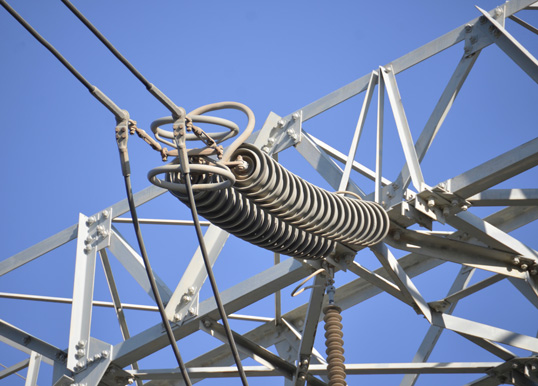 Application of a room temperature vulcanized (RTV) silicone coating to toughened glass cap & pin insulators has become a widely-recognized solution to prevent contamination flashovers in polluted service environments. Such coatings impart hydrophobic properties to the normally hydrophilic insulator, reducing surface energy and inhibiting films of continuous moisture that could lead to arcing, RTV-coated insulators preserve the inherent desirable properties of toughened glass, such as mechanical reliability and ease of inspection, while eliminating need for periodic washing.

This edited past contribution to INMR by Héctor de Santos of La Granja Insulators in Spain reviewed comparative pollution performance of three identical strings of fully coated, half-coated and uncoated standard toughened glass insulators at a severely polluted test station in southern France. The study involved monitoring leakage current over a 10-month period as well as performing comparative ESDD and NSDD measurements. Follow-up inspection and hydrophobicity measurements were also carried out to verify insulator status. Special attention was paid to interaction between these insulators and weather parameters such as relative humidity, rainfall, wind direction and speed.

Early RTV coating technology saw application mainly by manual spraying in the field. Due to difficult conditions, such as sudden wind, as well as any pollution or moisture on insulator surfaces prior to coating, results were often poor. In particular, low adhesion of the coating reduced effective lifetime and led to peeling. For these reasons, this approach was originally seen only as a temporary remedial solution and used mainly in substations where insulators are more accessible. Subsequently, industrial application of RTV silicone coatings in the insulator factory proved a turning point for this technology. Insulators coated in the factory are completely new and clean. Moreover, quality control exceeds even the most demanding requirements given in the RTV Coating Field Application Guide since every process parameter can be controlled. This ensures excellent bonding to the glass surface as well as homogenous thickness and finishing. Reduction in waste during application, high coating quality and long service life all result in an optimal technical as well as economical solution. Once coated, the insulator can be suitably packaged and shipped for use, even on major new overhead line projects.

Research was carried out to assess comparative pollution performance of three insulator strings – fully coated, coated only on the bottom surface and standard non-coated toughened glass – all operating in the same severely polluted environment. This allowed direct comparison. The natural pollution site chosen was the insulator test station situated on the Mediterranean coast near Marseille. This station, established by Électricité de France (EDF) to be operated at transmission voltages, is equipped with a real time leakage current monitoring system. Leakage current across an insulator string relates to probability of flashover and this parameter is therefore regarded as suitable to assess relative performance. Two reference strings of fully coated and uncoated glass insulator strings were also installed but in a non-energized area of the station. The goal here was to also conduct comparative ESDD and NSDD measurements as well as chemical analysis of pollutants. Periodic follow-up inspection and hydrophobicity measurements were also carried out. The test station is located only meters from the sea and near a huge petrochemical and refining cluster, making it among the most challenging service conditions encountered by outdoor insulators. In addition to ESDD measurements on reference strings, a directional dust deposit gauge (DDDG) was installed to collect wind-borne pollution from all directions and establish site pollution severity (SPS). Since one of the goals was to carry out a material-based comparison between three identical insulator strings with different levels of RTV coating, attention was also given to parameters such us wind direction and speed, rainfall, dew point, temperature, relative humidity, atmospheric pressure and solar radiation. All such parameters were recorded at a weather station and allowed for better understanding of their interaction with insulator material to explain trends found in leakage current.

The test station is located in a maritime and industrial environment and the most suitable insulator for these conditions is the anti-fog type (i.e. U160BSP). This has proven particularly effective in areas exposed to a salt-water spray and provides a longer creepage per unit with good wetting performance. Key geometric parameters are described below: 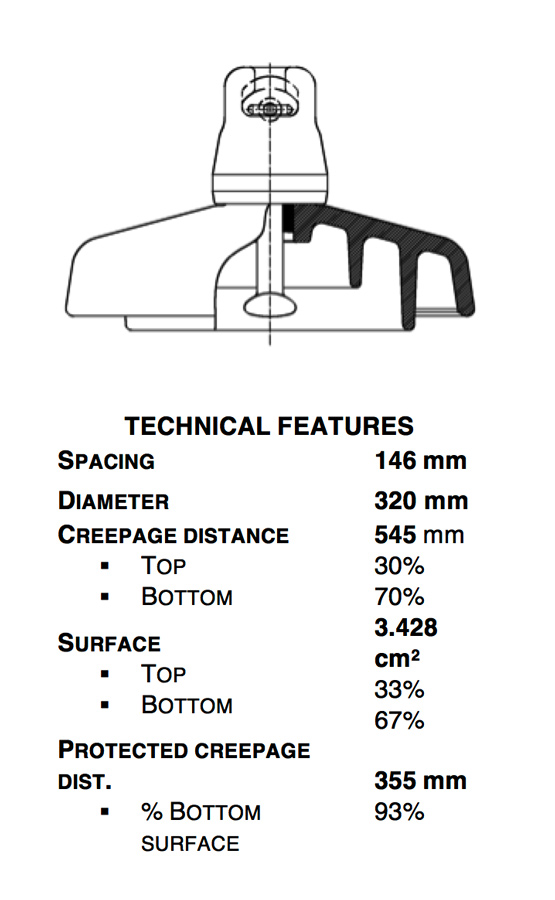 Areas protected 90º from the longitudinal axis of an insulator tend to accumulate more wind-borne deposits than other areas. Given this, half-coated insulators can prove an efficient solution since the RTV silicone material is applied to key parts of the protected creepage at the bottom of the insulator. Three insulator strings comprised of 10 units of fully coated, half-coated and standard uncoated glass insulators were energized at 245/√3 kV. The test station is equipped with a real time pollution measuring system based on leakage current monitoring. Leakage current is considered one of the most suitable parameters to indicate how close an insulator is to flashover. Two reference strings of RTV full-coated, and non-coated glass, were installed additionally in the non-energized area to carry out ESDD and NSDD measurements. 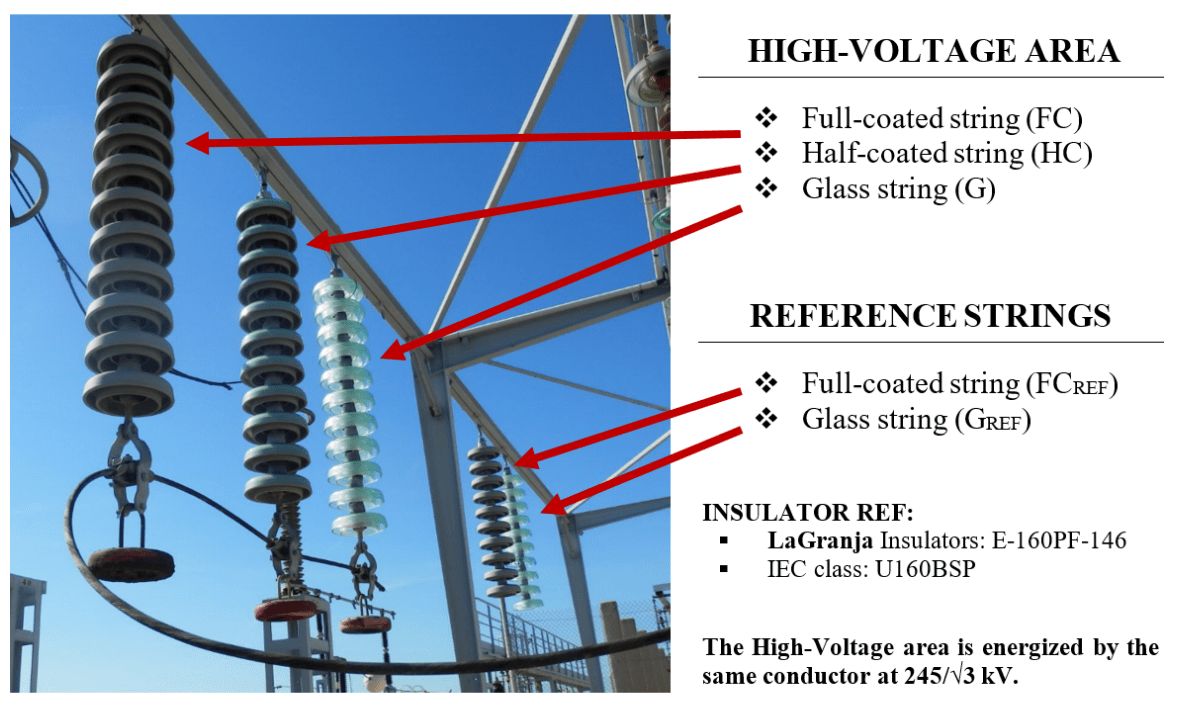 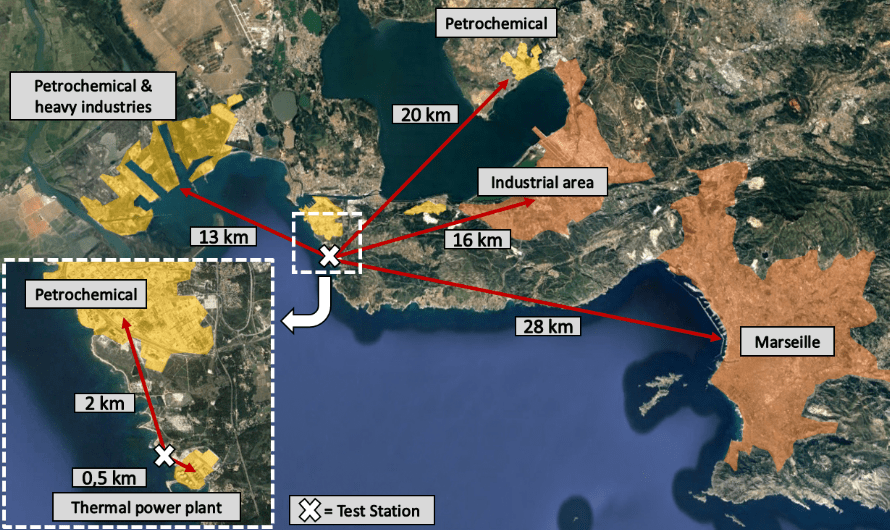 The test station is close to the Mediterranean and also in the vicinity of a thermal power plant as well as a huge petrochemical complex. There are also refineries, steel and chemical industries nearby. The site therefore combines heavy maritime and industrial pollution for insulator testing under severe service conditions. The climate is typical Mediterranean, with mild, humid winters and long dry summers. This is the sunniest area in France with over 3000 hours solar radiation per year, which makes the site especially suitable for testing polymeric materials such as RTV coatings under high UV. The test station is subject to strong winds from the northwest that carry not only industrial pollution from the petrochemical and heavy industries but also maritime pollution. Relative humidity is high, exceeding 70% most of the time. 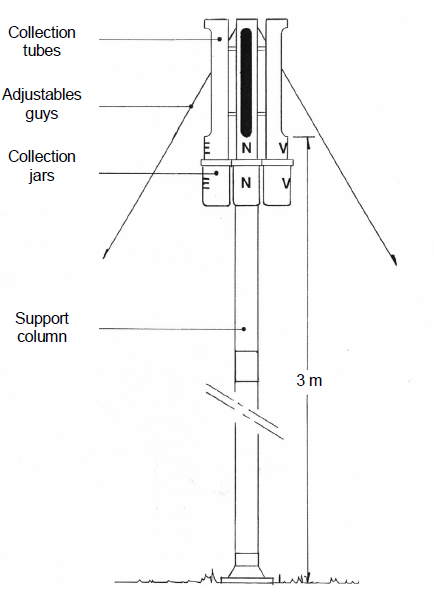 A directional dust deposit gauge (DDDG) is a tool for evaluating the pollution level of any site. The advantage lies in its simplicity and the fact that it can be used anywhere, even without presence of insulators. On the other hand, the DDDG cannot assess the self-cleaning properties of insulators, nor the impact of profile on pollution deposition. A DDDG is comprised of four vertical split pipes facing all four directions and a container below each to gather pollutants. These containers are removed at monthly intervals, their contents mixed with 500 ml of de-mineralized water and conductivities of the solutions measured using a meter. The normalized DDDG is calculated using the following equation:

Pollution index is defined as the average of the conductivities of the four directions, expressed in µS/cm and normalized to a 30-day interval. It can be calculated as follows:

As shown in the above chart, the highest normalized DDDG was found from the western direction, which is directly exposed to the coastline. During the 10-month test period, the highest pollution index corresponded to a site pollution severity class of ‘C’ or ‘medium’.

Equivalent salt deposit density (ESDD) is the equivalent amount of sodium chloride (NaCl) deposit, in mg/cm2, on the surface of an insulator and which will have electrical conductivity equal to that of the actual deposit dissolved in the same amount of water. Non-soluble deposit density (NSDD) is the non-soluble residue from the measured ESDD solution, filtered and weighed using filter paper – also in mg/cm2.

It can immediately be noticed that RTV coated insulators tend to collect more pollution than uncoated ones. Basically, the wetting process of pollution on an RTV coating, which is a hydrophobicity transfer material (HTM), is different than for glass. Therefore, ESDD levels should not be directly compared in terms of pollution performance. Moreover, distribution of pollutants between the top and the bottom surfaces is not uniform. For example, here, it was found that the average bottom to top ratio (B/T), also referred to as ‘contamination uniformity ratio’, was such that the CUR was 2.85 for both glass and RTV coated insulators. This suggests that top surfaces are washed more frequently by rainfall and that CUR may depend more on geometry than on material. NSDD also tends to be higher on RTV coated insulators. Measurements performed after 6 months in the field yielded an NSDD of 0.048 mg/cm2 for glass but 0.085 mg/cm2 for RTV coated insulators. To better understand the nature of prevailing pollution, the pollution was chemically analyzed but this revealed no difference in the composition of pollution deposited on glass and on RTV coated insulators. Results show that the dominant pollutant was NaCl and other marine salts that are easily soluble. These kinds of salts quickly form conductive layers on the insulator surface during wetting events such as light rain or prolonged periods of high humidity (RH>75%). On the other hand, high concentration of sulfates is typical of industrial areas. These salts, such as MgSO4 or Na2SO4, dissolve slowly and need a large quantity of water to speed up the process.

Wettability class (WC) of the test insulators was measured according to the IEC 62073 spray method during each periodic inspection. A surface with WC 1 is the most hydrophobic surface and WC 7 is the most hydrophilic. It was observed that wettability class ranged mostly from WC 1 to WC 3, depending on weather at time of inspection. WC on the top surface was heavily influenced by orientation of the insulator and a north-west exposure was found the most critical. 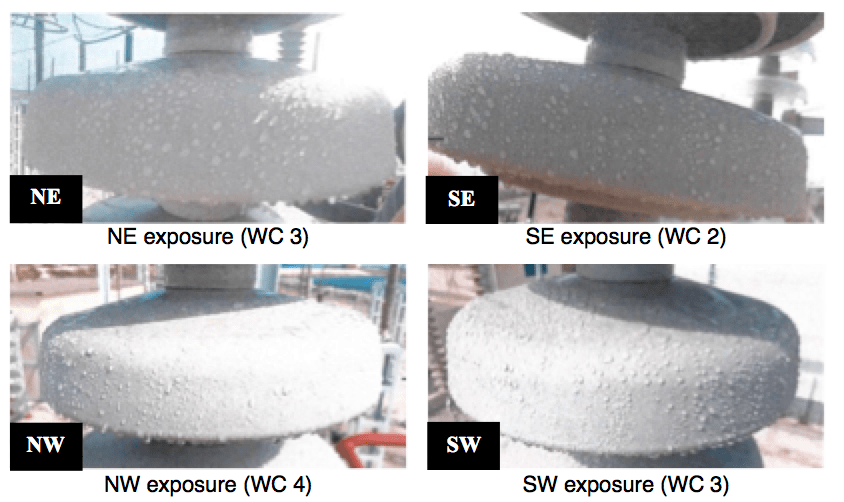 Simultaneous installation of three identical insulator strings of glass, half-coated and fully coated insulators at the same test station allowed direct quantitative comparison of performance. Leakage current across an insulator string is usually considered as the most suitable parameter to indicate how close insulators are to flashover. Therefore, this was chosen as the basis for comparison.

Leakage current peaks on the insulator strings were monitored at five-minute intervals over the 10-month period. Data was processed and classified into groups. A high reduction was observed in the number of current pulses in the case of half-coated or fully coated insulators (in the range of 10-50 mA). However, more significant still was suppression of almost every current pulses exceeding 50 mA.

Some correlation was found between weather data and development of leakage current. As shown in the chart below, the combination of contamination build-up and sustained moisture, i.e. relative humidity exceeding 75%, caused discharge activity on glass insulators. By contrast, RTV coated insulators fully suppressed development of leakage current due to the high relative humidity. Moreover, it was observed that RTV coated insulators were affected only by high transient wetting events such as light rain. In any case, as shown, leakage current peaks were always lower than those found on glass insulators.

Wind is a second environmental factor that could trigger pollution events. To study occurrence of these events, leakage current data was analyzed when relative humidity was below 75% to distinguish it from events cause by wetting. A relationship was found between leakage current peaks and wind direction and speed. The most critical wind was noticed in the range of 5-10 m/s coming from the NW-NNW (300-350º) where a huge petrochemical complex happens to be located. Industrial pollution carried from this direction seemed to moderately decrease hydrophobicity of RTV coated insulators and explains leakage current peaks found on silicone-coated strings.

• RTV silicone-coated glass insulators are an excellent solution to prevent contamination flashovers in heavily polluted areas. The results showed that the leakage current was extraordinarily decreased, if not directly suppressed.

• Correlations between weather data and leakage current were noted. Wetting by high relative humidity was de main cause of pollution events for glass insulators, whilst RTV silicone-coated were only affected by high transient wetting events such as light rain