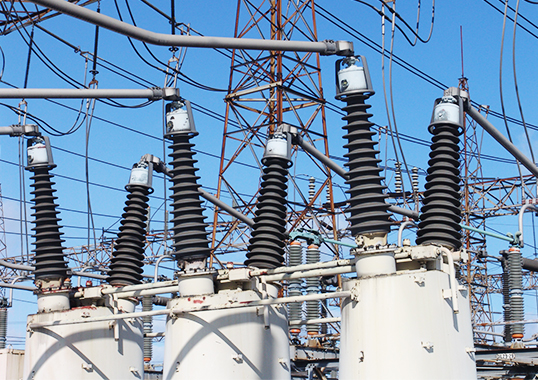 This edited past article, contributed to INMR by Professor Ravi Gorur, reviewed important characteristics of RTV silicone coatings and on the attention required during their application to ensure optimal performance.

Maintenance practices for HV insulators operating in polluted environments have been developed largely through experience and different techniques have been used. One of these – room temperature vulcanized (RTV) silicone rubber coatings – has become increasingly popular. The key attributes of such coatings include good dielectric properties and flexibility over a wide temperature range, combined with excellent resistance to UV, chemicals, thermal degradation and corona discharge.

Under clean service conditions, the low surface energy of RTV silicone does not allow wetting of the insulator surface and water remains in the form of isolated droplets. On polluted surfaces, low molecular weight silicone fluid, which diffuses from the bulk of the coating, surrounds contaminants with a monolayer which imparts them with a non-wetting property. In addition, this monolayer inhibits dissolution of the contaminant in water. As a result, the electrolytic layer that develops is weak, avoiding large leakage currents that can lead to flashover.

Early development of RTV coatings goes back to the late 1960s and took place at utilities on the West Coast of the United States. Their first large-scale application was in 1987 and, by all accounts, only a few problems were encountered with this first generation product. Improvements followed in the areas of better adhesion characteristics to insulator surfaces and superior resistance to development of leakage currents over longer periods of time. Also, there have been improvements in resistance to degradation as well as in easier application – even under energized conditions.

These systems are dispersed in a solvent which acts merely as a carrier medium to transfer the RTV rubber to the insulator surface. As the solvent evaporates, moisture in the air triggers vulcanization, forming a solid rubber coating. The speed at which this process takes place depends on the type of solvent as well as on temperature and humidity.

The electrical and physical properties of coatings can vary considerably depending on formulation. These properties are dependent on amount and type of polymer, the various fillers, degree of cross-linkage and amount of free fluid in the coating. The properties of adhesion to porcelain, water repellency and the ability to resist development of leakage currents are all of great importance to performance.

Various studies on the ability of RTV coatings to suppress leakage current have involved testing either in a salt-fog chamber or on a rotating wheel. In both types of test, onset of leakage current (see Fig. 1) is the signal that hydrophobicity has been lost.

An analytical technique known as X-ray mapping, performed using a scanning electron microscope, can demonstrate the diffusion of low molecular weight (LMW) polymeric chains from the bulk to the surface. This fluid imparts the non-wetting property to the contamination layer by surrounding these particles with a monolayer. Fig. 2 shows the results of application of four different formulations of RTV coatings. Diffusion of the LMW chains is manifest as dots on the picture frame. As this fluid is gradually removed from the surface through constant wetting, a coating loses its ability to suppress leakage current. The length of time during which initial hydrophobicity is retained and rapidity with which surface hydrophobicity is regained is a function of coating formulation.

Fig. 2 demonstrates that there can be significant differences in the leakage current suppression capability of various RTV coatings available on the market. This translates directly into the ability of the coated insulator to withstand contamination at the nominal operating voltage, especially after ageing.

In the virgin or new condition, it is generally not possible to detect this difference in ability to withstand nominal operating voltage under contaminated conditions. This is shown in Fig. 3, which illustrates that coating D flashes over at a higher level of contamination, as expressed by ESDD, than coatings C and B. For coating A, after artificial ageing, there was negligible difference in the ESDD required for flashover when compared with the uncoated porcelain insulator.

The process by which the silicone fluid from the bulk coats contamination on the surface of an insulator and imparts hydrophobicity to it appears to function for all but very thick layers of contaminant, e.g. cement. For such layers, the coating will probably not perform its intended function.

The current technology on compounding of silicone materials for coatings is that a filler (such as ATH) must be added to protect against tracking and erosion which can occur during prolonged periods of wetting. In these circumstances, hydrophobicity may be temporarily lost and dry band arcing results. Although this process has been demonstrated in the laboratory, to date it has not been found in service. In fact, the presence of filler in an RTV silicone coating serves to displace the polymeric portion, which can negatively affect a coating’s ability to suppress leakage current.

The first application of RTV coatings to porcelain insulators operating in a seacoast environment highlighted the importance of good adhesion. It was found that wind laden with salt had caused erosion cutting of the coating and eventually lifting of the coating from the surface. This allowed moisture and salt to come into contact with the underlying surface thereby creating a condition for coating failure. For much the same reason, successful application of RTV coatings in desert environments requires good adhesion of the coating to the porcelain/glass insulators.

For example, importance of good coating adhesion was brought out in an application adjacent to a cement plant. In this type of environment, coating performance is somewhat reduced because of the rapid build-up of cement. As a result, water washing over an extended cycle is necessary to prevent flashover. If the coating does not have good adhesion to the porcelain or if the porcelain has not been adequately cleaned beforehand, maintenance cleaning using high-pressure water can remove not only the cement but also the coating itself.

After performance, ease of application is the next most important characteristic of an RTV coating.

Insulators to be coated should be thoroughly cleaned and dry. In most instances, the insulators need only be washed with high-pressure water.

Much like any paint containing a high proportion of solids, material preparation refers to mixing of any settled solids prior to use. This is especially necessary if the coating has been kept long in storage.

Thick coatings must be thinned in the field with a solvent to facilitate spray application. Thinning on site is time consuming and requires use of potentially dangerous solvents in the workplace. Furthermore, field application does not always allow for careful measurement of additives, which means that every pot of coating has the potential of having different consistency. It is therefore best to specify a coating which comes ready-to-use after simple mixing.

RTV coatings can be applied with conventional air spray or airless spray equipment.

Coating systems dispersed in non-flammable solvents may be applied to energized equipment using an airless spray system and a hot stick. This must be done under strict supervision and performed only by crews experienced in live-line work. It should be noted that since energized application does not permit measurement of coating thickness, material loss is generally much higher and over-spray is far greater than is the case during conventional ‘dead’ application.

Overall experience to date has been good, with only few problems reported. In some situations, because of the type and extreme contamination conditions, RTV coatings might require water washing on an extended cycle basis (in comparison with uncoated porcelain insulators) in order to maintain their hydrophobic surface.

Of all the various concerns which users have in regard to RTV silicone coatings, surely the greatest involves the issue of how long this solution will last. As labor costs to clean the insulators and apply the coatings is high, users look for a long performance life in order to recover these costs. By comparison, other concerns dealing with the removal of the coating, re-application and possible damage to equipment are relatively minor.

The end of life of a coating can be defined in terms of its ability to prevent flashover. There are applications where coating performance has been less than desirable because of the high rate of contamination build-up due to proximity to a pollution source as well as insufficient natural washing. In such cases, the period of satisfactory coating performance can be extended by cleaning, although this will probably not be required as often as for uncoated insulators. In many of these applications, the contaminant is cement-like in texture and readily forms a thick crust on coated insulators. Fortunately, this type of contaminant does not bond to the rubber layer and is easily removed through high-pressure water washing. By contrast, removal of such contamination on uncoated insulators normally requires high-pressure dry blast techniques which involve considerable cost.

The end of a coating’s useful life is perhaps best defined as the onset of the condition whereby hydrophobicity is no longer being transferred to deposited pollution layers or where maintenance requirements become essentially the same as for uncoated insulators. Various studies have been conducted on silicone materials in order to clarify the question of life expectancy. However, to no answers have been offered. Some commercial coatings have been in service for 10 or more years with little or no evidence of ‘end-of-life’. There are however, special conditions which must be considered, including corona degradation and coating reversion.

In some designs of station posts, corona discharge occurs from the hardware at the energized ends of the insulators. This corona is in air and can sometimes impinge on the porcelain glaze. Since porcelain is an inert material, it is not much affected. However, such is not the case when the porcelain has been coated with RTV silicone and, in such instances, the coating can be expected to age.

Ageing of the coating from corona is due to an electrochemical process. Cracking, cutting and formation of a silica layer can occur due to degradation of the polymer. With sustained corona, the surface may even become hydrophilic. If large sections of the coated surface exhibit loss of hydrophobicity, then the coating has reached the end of its useful life and should be removed. It may then be possible to re-coat the affected areas after removing the degraded coating. Proper voltage grading by providing the appropriate end fitting hardware is essential to minimize degradation from corona.

The PDMS chain is generally considered to be hydrolytically stable. However, there is evidence that weathering of the polymer is accompanied by a slow de-polymerization which occurs in the presence of moisture. Hydrolysis causes random cutting of the polymer chain leading to a rapid decrease in molecular mass. Temperature is a factor and electrical stress can also speed up this process. Under such circumstances, the reduction of the polymer to a sticky mass is called reversion. For reversion to occur, moisture must reside within the coating, i.e. the coating must be porous either from improper application or poor formulation. A simple test for reversion of a coating applied to porcelain involves boiling in water for 100 hours. Most coatings will exhibit some softening from this process, but they should not reduce to a mass which resembles putty.

Application of RTV coatings for improving the contamination performance of already-installed ceramic insulators is well established and the technology has advanced significantly since inception. Commercially-available coatings differ in their formulation details and this has a bearing on the application as well as on the ability of any coating to offer a satisfactory long-term solution to contamination problems. Feld experience has generally been positive with only a few problems reported, especially in adverse environments. Service history, limited trials and word-of-mouth seem to be the methods most users employ to select a particular coating for large-scale installation.