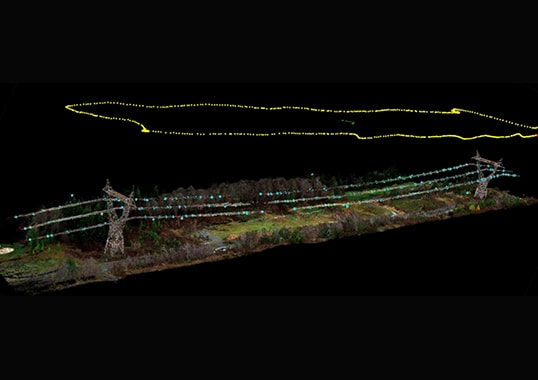 Power line assets must be periodically inspected to ensure reliability and longevity. Since inspections with helicopter, foot patrol or tower climb are hazardous and expensive, unmanned aerial vehicles (UAVs) provide a safer and more efficient platform to bring inspection sensors close to the asset. However, they can be quite challenging to pilot because of limitations in operator depth perception and wind. This recent contribution to INMR by Ike van Cruyningen of LineSpect explained how self-driving drones can prove a cost-effective platform for detailed component inspection.

In 2007, EPRI and the Southwest Research Institute brought together a number of power industry professionals to report on “Future Inspection of Overhead Transmission Lines” A. Phillips, EPRI June 2008. Table 2-1 in that report listed 29 possible faults with their causes, results, and potential sensing technologies. Twenty-four potential faults listed either an optical or thermal infrared camera, making a strong case for inspecting transmission lines with cameras mounted on airframes. The EPRI list of potential faults is discussed in much more detail in the following sections and shown in Tables 1 to 3. A similar classification of faults is listed in “Aerial Surveillance System for Overhead Power Line Inspection” by Lili Ma and Yang Quan Chen in Report USU-CSOIS-TR-04-08 Utah State University, 2004:

• Broken or chipped insulators
• Discoloration due to corrosion
• Traces of arcing.

The most commonly used inspection sensor is a visible light camera because it is an excellent match to human pattern recognition skills. Enhanced cameras to detect other light frequencies can provide insight into other potential issues. A thermal infrared camera can show local heating due to incipient insulator or splice failure. An ultraviolet camera can show areas of excessive corona discharge, potentially leading to insulator failure. A near infrared camera combined with a visible light camera to calculate a vegetation index can show dying or dead trees with potential fall-in hazard at the edge of a right-of-way.

One measure of camera performance during inspection is spatial resolution. This is the separation of each picture element (pixel) in the plane of the picture, i.e. the sample distance. In aerial photography this is often referred to as the ground sample distance (GSD). Seeing large defects such as tree incursions into the right-of-way, missing lattice tower members, or leaning distribution poles does not require high resolution. These images can be captured from a distance or with a short focal length lens. However, visualizing small defects such as cracks in an insulator or frayed strands in a phase conductor requires close-up photographs or a long focal length lens, i.e. a small sample distance.

A second measure of camera performance is number of colors or gray scale levels recorded. To see if something is present or absent, e.g. a crack in an insulator, a missing spacer, or label on a tower ID placard, requires only a few levels. But to identify contamination on an insulator, discoloration due to flashover, or white or red rust requires many more levels. Tiny sensors such as those in cell phones typically capture less than 256 levels, whereas large format sensors can capture thousands of colors – even at low light levels. Typical JPEG images capture 256 shades per channel, sufficient for most inspection tasks. RAW format images can record 256*256~64,000 shades per channel, which is above the capabilities of most cameras.

Detecting different defects requires different spatial resolutions and color levels, as summarized in Tables 1 to 3. These groupings naturally fall into four different flight paths. EPRI’s list of 24 potential faults can be detected in right-of-way, tower, wire, and storm damage inspections, as illustrated below:

Right-of-way inspections to detect incursions are generally ordered by the utility vegetation management organization. In North America, critical transmission lines must be inspected annually per National Electric Reliability Corp (NERC) requirements. The primary objective is to detect encroachments that may lead to flashover. Table 1 shows other potential faults selected from EPRI’s list that can be detected in right-of-way inspections. The last two columns estimate the sample distance and number of levels required to detect the listed fault. All faults listed have comparable sample distance and level requirements and thus are readily detected in the same flight.

A right of way inspection to detect faults as per Table 1 can be done with a high, fast, straight flight along the lines. It corresponds closely to vegetation inspections currently flown with helicopters in response to NERC requirements. Using a quality consumer camera and a 35 mm lens, the entire width of the right-of-way (100-200 feet) can be photographed to a ground sample distance of less than a few centimeters when flying at about double the tower height.

Fig. 1 shows a point cloud generated from an automated UAV flight flown over a 230 kV line at about twice tower height. Each yellow dot represents a location where an image was taken. The cyan segments represent automated detection of the phase conductors and clearance measurements in the point cloud. Point clouds can be generated from Light Detection and Ranging (LiDAR) measurements or calculated from multiple overlapping photographs using photogrammetric software. A LiDAR cloud is generated in real-time in the field instead of in hours back at the office. However, it typically has a lower density of points and no color information. An advantage of the photogrammetric approach is that individual photographs provide enough detail to identify species and thus estimate growth rates. Management of fast-growing species within the right-of-way can be planned several years in advance. Fig. 2 shows a sample photograph of a right of way inspection flown in British Columbia, Canada. An arborist could readily identify the healthy tree at the edge of the right of way (center of photograph) as a Western Red Cedar and the ones further right as Douglas Firs.

Right-of-way inspection flights are relatively easy to automate. Given the right-of-way center locations, a target offset to the side of the center, and a target altitude above ground, most ground stations can automatically generate the waypoints for an autopilot to complete the flight.

Tower inspections are ordered by the engineering department to anticipate component faults for maintenance planning. They are typically flown on a 5 to 10 year cycle for each tower, though they may be ordered more often for problem towers or lines where prior experience indicates the need for closer vigilance. All potential faults listed in Table 2 require an order of magnitude smaller sample distance and more levels than the right of way flight in Table 1. That means the flight has to be flown closer, with a better camera, and from all observation angles.

To maximize the signal for the sensors, this flight should be close-in, at about a 3-5m standoff distance from the tower. Closer flights get better pictures at the expense of safety during windy conditions. A zoom lens allows a bigger standoff for safer flight but the signal drops off as the square of the distance. With long focal length zoom lenses, wind gusts cause swings in the camera direction usually causing gaps in the inspection coverage. Fig. 4 shows the planned and actual flight path for a detailed component inspection that provides full coverage of the tower. It is a series of loops at different altitudes: first above the shield wires looking down, then level with the cross arm looking horizontal, and finally below the ends of the insulators looking up. Fig. 5 is an image from the top loop of that flight showing both surface rust and deep corrosion that penetrates the galvanizing on the cross arm. This tower is about 12 km from the Pacific. Fig. 6 is an illustration of the standoff distance in wind still conditions showing the relative UAV location as well as a kite in the end of the insulator.

Manually piloting a UAV close-in to a tower is challenging. Human vision systems are not designed to accurately distinguish thin wires at 20 m from those at 23 m, yet this is what we ask the pilot to do when trying to fly this close. A second observer and/or a first person view (FPV) system is required to get the UAV location correct relative to the tower. Fig. 7 is a comparison of an automated flight path (white) with a manual flight (yellow) flown by an expert pilot with 20/10 vision, a spotter, and a first person view camera. Winds were moderate.

Wire inspections catch faults listed in Table 3. These require small sample distances so must be flown close, slow, and in catenary arcs to track the wires.

Fig. 8 shows a result from a close-in wire inspection. The corrosion on one strand of the shield wire, as well as the support hardware, is evident. The phase conductors in the top right of the photo are in much better condition.

To get the desired sample distance with a field of view encompassing all the wires using a 35mm lens requires a standoff distance of 3-5m. A longer focal length would allow a flight further from the wires, but makes it very challenging to keep all the wires in the field of view if there is any wind. If you’ve tried to take photos of sports with a zoom telephoto, you will know you don’t catch players in the frame very often. To avoid forward motion blur for a sample distance of 0.5 cm, the flight speed must be less than ~2.5 m/s. This close-in, slow flight is an excellent application for an automated unmanned aerial vehicle

Unmanned aerial vehicles are a convenient tool for storm damage assessment. Often, after a storm roads may be impassable due to downed trees or accumulated snow. Quick damage assessment makes it easier to plan repairs and get the lines back in service. This type of flight differs from the prior three in that the flight path is not known before takeoff. It is difficult to fully automate these flights because the damage is not known a priori. It is desirable to find the damage and then loop around it to assess extent. An essential capability is real-time transmission of images back to an operator, also known as first-person view (FPV). FPV makes it possible to fly along the lines and zoom into areas of damage. Common sense and regulations require two operators—one to observe the UAV and one to observe the FPV monitor.

UAVs are an outstanding platform for bringing inspection sensors close to tower components. Inspection requirements naturally define four categories of flights: right-of-way, tower component, wire, and storm damage assessments. The first three can be fully automated to get full coverage with the best possible signal to noise ratio. Storm damage assessment requires a pilot and a FPV operator to recognize damage and fly close to assess it.