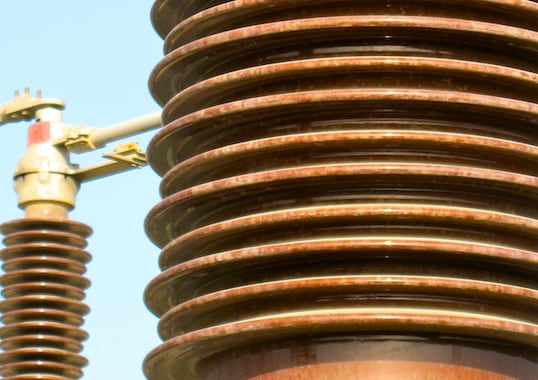 The Federal Grid Company of the Unified Energy System (FGC UES) operates the electrical transmission grid in Russia and is among the world’s largest companies transmitting power by overhead lines from 220 kV to 750 kV. It is also ranked near the top in terms of overall length of its transmission system and total transformer capacity. Managing such a large-scale asset, FGC UES is also responsible for maintenance and development of this power grid. For example, the investment program in 2013 aimed to bring into service over 15,000 km of new overhead transmission lines. One of the factors influencing the reliability of this vast electrical grid is the organization of standards development (STO) whose goal is to establish up-to-date technical requirements for all insulators used domestically on overhead lines and at substations. To realize this task, FGC UES – together with research institutes serving the Russian power industry – has developed a number of STOs in regard to suspension and substation insulators. As part of the process, insulation selection rules in terms of pollution flashover performance were used and the approach was based on the statistical method for insulation selection for clean and polluted areas. In this regard, statistical methods for outdoor insulation selection based on expected number of line outages under normal operating conditions (as prepared by the HVDC Power Transmission Research Institute or NIIPT) were applied for the first time anywhere. Insulator selection in terms of pollution flashover electrical tests that account for these statistical factors was later also included in IEC 60815. This article, contributed by V. Y. Seleznev and N. A. Vaga of the FGC UES as well as E.A. Solomonik of the NIIPT for the 2013 INMR WORLD CONGRESS, reviewed the key insulator selection criteria found in these Standards.

This STO deals with all porcelain, glass and polymeric insulators for AC overhead lines and substations from 6 kV to 750 kV. Selection of specific creepage distance for suspension and substation insulators is recommended according to Table 1 depending on pollution severity level. This STO is harmonized with IEC 60815-1, however does not contain the lowest pollution severity level (very light).

In Russia, regional ‘branch-wise’ rules governing selection of electrical insulation started in 1964 and were renewed every decade thereafter. ‘Regulations on Electric Installation’ (7th edition and referred to simply as ‘Regulations’) have been in force since 2002. However, compared to these ‘Regulations’ the STO contains more detailed recommendations on insulation selection, particularly in the vicinity of heavy industry. Insulation selection (whether glass, porcelain or polymeric) is performed in terms of specific creepage distance that depends on site pollution severity level, rated voltage and, if appropriate, some correction factor. Correction factors are intended to take into account:

If insulators can withstand tests under pollution and wetting conditions for pollution severity levels from 2 to 4, a kp of less than 1.0 is acceptable.

Practical applications of insulation can be sub-divided as shown in Table 7. The STO also provides recommendations on optimum configuration of insulators for service areas having different pollution performance requirements.

Compared to the approaches described in IEC 60815, elaboration of criteria for estimating pollution severity is provided in line with the specific characteristics of pollution sources. In this regard, STO formulates practical recommendations on assessing pollution severity level based on wind parameters as well as distance from pollution sources. Estimating pollution severity level from nearby industrial facilities is also based on calculated annual emissions, with special emphasis on that proportion of emissions resulting in substances that combine with atmospheric moisture to form a semi-conducting layer on insulator surfaces. Given this pollution risk, calculated annual emissions have to be multiplied by a ‘danger factor’ k0 (from 0 to 5). Similarly, selection of insulation for areas near coastlines is defined based on water salinity. Where there are areas with salty soil, for example, it is necessary to select insulation in line with the applicable salt concentration. Examples that illustrate pollution severity levels from nearby oil refineries, iron industry and nonferrous-metals plants are shown in Table 8.

The traditional Russian approach to insulation selection is based not only on laboratory-obtained pollution flashover tests but was also the first to also be based on statistical methods (now included as well in IEC 60815). This statistical approach has been employed since the 1970s and was based on statistical insulation selection developed during design and commissioning of the 500 kV double-circuit 800 km transmission line from the Aswan Hydropower Station to Cairo. Later, these same methods were applied to a number of other overhead lines as well as substations from 220 kV to 1200 kV.

Practical experience with insulator flashovers at sites polluted by natural contamination has indicated that reliable performance under typical service conditions can be assured if insulator flashover voltages exceed maximum phase voltage on overhead lines and substations by a multiple of from 1.8 to 2.0. This finding is supported by the above-mentioned statistical methods. Application of statistical methods for selecting insulation takes into account 50% flashover voltages, distribution laws and dispersions, population of insulators to be used and number of dangerous wetting events. In fact, these statistical methods, in line with IEC 60815, have now been incorporated into commercially-available software programs and have proven highly effective compared to relying only on past service experience for insulator selection.

In accordance with STO, insulator strings and substations insulators for 110 kV to 750 kV applications under polluted conditions should have 50% flashover voltages not less than those shown Table 9.

The specific surface conductivity of the pollution layer is assumed to be at least:

The above-mentioned requirements for service under pollution reflect differences between polymeric insulators and glass or porcelain. As a rule, flashover performance must be used during any new insulator design process.

A number of measures are implemented in Russia in terms of mapping pollution severity levels for the purpose of selecting insulators in wetted and polluted environments. A pollution map (PM) is a special geographical map showing both industrial and natural pollution sources as well as overhead lines and substations. Atmospheric air pollution is also taken into account. PMs were developed for the UNEG grid and revised regularly over many years. As a result, the reliability of electrical installations in naturally and industrially polluted areas increased considerably since priority in developing a PM is given to service experience. In fact, the PMs developed by respected local research institutes and design organizations became the normative documents for selecting insulators in any specific region. Chapter 1.9 ‘Electrical installation insulation’ of Russia’s ‘Regulations’ indicates that reliable performance of suspension and substation insulation can be achieved by taking into account local as well as regional pollution severity level maps. Methods to develop a PM include estimating insulation levels based on findings of testing for flashover voltage and specific surface conductivity.

As a rule, PMs for areas with natural pollution are intended to cover a large region (e.g. a specific Republic). Local PMs are also developed for areas with industrial pollution. As discussed, the basis for their development is the test results of flashover specific creepage distance (lflash) or specific surface conductivity (χR) of insulators polluted under natural conditions. Flashover voltage and/or specific surface conductivity of insulators are measured for insulators removed from service on overhead lines and at substations or taken from polluted HV test stations, under voltage or without voltage, where they have been installed for a time period representing the most dangerous pollution conditions for that area while also allowing for natural cleaning by rain and wind. Not less than two insulators are de-mounted from service in the area being investigated. If the insulators to be tested have been installed in a test station, it is necessary to ensure that they have been there for not less than three cycles covering 3 years and with pollution duration being not less than 2 years.

As such, the STO elaborates criteria that determine pollution severity level on the basis of investigation findings.

The value of this STO is that it provides for the basics of operation and maintenance of insulation under pollution. This includes controlling the condition of insulation in service, e.g. enhancing insulation, cleaning overhead and substation insulation under polluted conditions, applying hydrophobic coatings, etc. Special emphasis is given to preventing insulation being overwhelmed by pollution by relying on warnings from meteorological and environmental protection services. In this regard, it is necessary to take into account unusually dangerous pollution conditions such as:

In order to select the most appropriate preventive measures in each case, it is necessary to first identify:

• time available to avoid flashover risk;
• type and population of insulation elements that have simultaneously become polluted;
• possible losses resulting from any outage.

The main preventive measures include:

Strengthening insulation is the main measure utilized to increase reliability of suspension and substation insulators in service in polluted areas. For example, hydrophobic coatings are widely applied in areas with pollution severity levels 3, 4 or higher as well as in areas with heavy emission of chemicals that promote conductive precipitation. These include RTV silicone coatings, viscous pastes and technical greases such as transformer turbine grease. RTV coatings that have a high degree of hydrophobicity as well as resistance to tracking and erosion improve pollution performance of insulators. Service experience confirms that such hydrophobic coatings on 110 kV substation insulators and 220 kV bushings in areas having level 4 pollution severity offer an effective life of as much as 10 years. This STO provides detailed requirements on service and post-service testing procedures for polymeric line insulators and also gives recommendations on installing Directional Dust Deposit Gauges (DDDG), in accordance with IEC 60815. Other STOs on these topics include:

On the basis of service experience and research findings, the FGC UES has also ratified the STO ‘Type technical requirements for certification process of line insulators’. This contains heightened standardized requirements for lightning impulse-withstand strength and one minute testing voltage of frequency under dry and rain conditions. These new standardized power frequency testing voltage and lightning impulses for polymeric line insulators are shown in Table 11.

The valuable information presented in the above-referenced STOs can also find application in development of additional software programs in accordance with the algorithm developed by CIGRE WG C4.303, which contains an integrated approach to insulator selection and dimensioning. Using computer-based statistical selection of insulation makes it possible to achieve more accurate insulation design while also reducing the manpower needed for multi-factorial analysis when selecting insulation. In this way, using STO technical requirements for selecting insulation along with future application of computer-based statistical selection methods will together increase the reliability of the FGC UES power system.

Dealing with Deterioration of Silicone Insulation in Critical Applications

March 23, 2018 Comments Off on Dealing with Deterioration of Silicone Insulation in Critical Applications