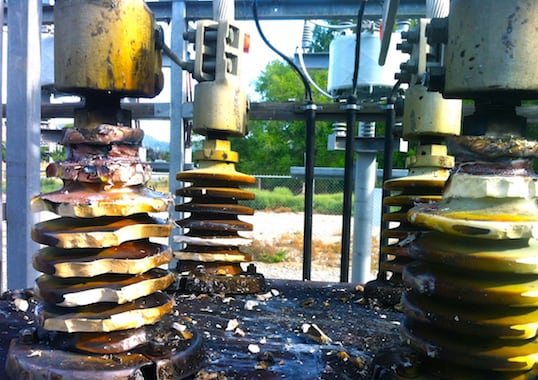 Among the most vulnerable links in any power network are the points of interaction between live equipment and wildlife – from birds to scavenging carnivores. Taken together, these creatures present a constant threat to the safe operation of network assets. There are plenty of anecdotes of squirrels or feral cats being electrocuted and in the process blacking out entire neighborhoods while also damaging or destroying breakers and transformers. In the case of bushings, for example, shock waves from a wildlife-induced flashover can blow their porcelain housings into shrapnel that threatens safety and impacts nearby equipment.

The global economy is said to suffer huge losses each year due to sudden power disruptions and data suggests that as much as 12 percent of these are due to wildlife. If outages classified as ‘source unknown’ are factored in, most of which are thought to involve wildlife, the annual impact is even greater. Moreover, this risk is only growing given the focus these days on lowering costs, saving space and making electrical infrastructure less visible through compaction – in the process also reducing the distances that need to be breached to create faults.

Given the losses from outages triggered by wildlife, one might expect that the majority of installations from 5 kV to 38 kV, where clearances are most at threat, would be equipped with wildlife protection. Yet industry sources estimate the incidence of their application is still less than 20 percent. Many vulnerable substations remain ‘accidents only waiting to happen’. This article showcases one substation in Western Canada that has suffered a history of wildlife problems and which was equipped with protective covers and other wildlife deterrents intended to resolve this problem.

A number of factors are driving growing interest in applying wildlife protective devices at vulnerable substations. One is the universal goal of maintaining high system reliability. Another relates to the consequences of animal interaction with energized structures, which are not just power interruptions but also potentially costly damage to expensive assets. It has been estimated that such risk at substations could be reduced by 80 per cent through selective application of welldesigned wildlife protection products.

Yet another factor behind renewed interest in wildlife mitigation products relates to the potential for fines and penalties should protected species be electrocuted during phase-to-phase or phase-to-ground contact. Raptors typically have wingspans that place them at elevated risk of being involved in contact with energized equipment. This can become a problem at substations where clearances are determined by required flashover performance and not by the wingspans of local birds. In the western United States, for example, a large electric utility acknowledged responsibility in killing endangered eagles due to accidental electrocution. The utility was ordered to invest heavily in system upgrades intended to protect these birds.

Wildlife protection devices now being offered have different designs and are made from a variety of polymeric materials. One of the keys to performance is good fit since power arcs travel through air and the gap between the creature and the live fitting is critical. Any crack or seam in a protective covering could allow a power arc through and the higher the voltage, the greater this risk. Wildlife behavior also requires good fit to achieve best long-term results. This is because bird nesting at substations attracts cats, snakes and other predators that can dislodge loose-fitting covers as they push to the nest. They get electrocuted and the result is a costly outage.

Materials themselves are also important. All animal protection products start with a problem that must be addressed. But users need to be certain that whatever is being applied does not cause more problems than it resolves. For example, materials used must be fire-resistant and one of the goals behind IEEE guidelines for their application has been to assure that wildlife protection devices do not create new problems over the long-term.

One of the considerations when it comes to composition of materials used in these products is suitability to an outdoor environment of electric field and persistent high UV. Materials must be inert and resistant to tracking and erosion as they will face the same stresses as insulators, including dry band formation that can leave carbonized dots on their surface. Users are therefore advised to look at the tracking and erosion performance as well as UV test data for any wildlife protection device they consider installing. This is the only way to be sure these products will survive for years in a potentially hostile service environment. It is also essential to ensure that whatever latches attach the devices to the equipment they protect must not deteriorate over the years. If that happens, the devices can break off or shift under wind, exposing the live ends of equipment to contact by wildlife.

In the past, many wildlife protection devices tended to be made from relatively inexpensive PVC or EPDM but there has been growing use of more robust polymers such as EVA, silicone rubber or blends of polyurea that are better suited for power industry applications. These are offered as extruded sheets that can be cut in templates to fit whatever equipment is being protected or pre-molded in the factory to specific shapes.

Apart from material, which has to be durable enough to last at least 10 to 20 years in the case of a substation, another key element of wildlife protection devices is speed and effectiveness of application. The former is especially important if scheduling an outage is needed to install them. For example, designing protective devices for custom fit not only maximizes performance but can also translate into lower installation times. Hotsticks have now also been developed that allow wildlife protection covers to be put up with the equipment energized. Indeed, the growing difficulty in scheduling an outage has been one of the reasons why many substations remain unprotected against wildlife intrusion. The clear trend is therefore toward wildlife protection devices that can be installed without de-energizing the equipment. Suppliers of wildlife protection devices must ideally co-operate with the customer to develop a ‘site protection plan’ intended to identify potential problem areas and customize the solution in each case.

Another trend in this business is growing sales of wildlife protection devices directly to manufacturers of transformers, arresters, re-closers, etc., so that such equipment is already equipped with these at time of purchase. End users should always take care, however, since factory-installed caps can sometimes be sourced from companies with little experience in wildlife protection and may be made of materials that will not stand up many years in a demanding service environment. Utilities may therefore wish to work with their OEM suppliers of such equipment to specify exactly what they will need when it comes to factory-installed wildlife protective devices.

Many in the wildlife protection business are not convinced that there are alternative solutions to covering up equipment where clearances are most at risk. Instead, they believe that the real alternatives to improved wildlife protection of equipment rely instead on restoration schemes and relays or reconfiguring structures to achieve extra spacing between phases and phase-to-ground. But implementing such solutions can prove costly and take time. The consensus is that reducing and eliminating the problem of wildlife interaction with power infrastructure can most practically be accomplished by covering exposed equipment at substations with specialized protection products.

Glenmore Substation in Kelowna, British Columbia offers a good example of a substation that has encountered its fair share of wildlife problems. Built decades ago, it is bordered on one side by a busy thoroughfare with lots of traffic, making it seem an unlikely candidate for such issues. Yet its rear faces a forested mountain ridge and trail where there are populations of squirrels and other rodents. This in turn has attracted large birds of prey with wingspans that can easily bridge clearances at Glenmore.

In 2008 and again in 2012 and 2013, for example, contact by squirrels with energized bushings caused serious damage to breakers. Apart from this, birds were found electrocuted alongside potential transformers (PTs). While smaller than local raptors, they nevertheless still had wingspans long enough to bridge the relatively small clearances of this equipment.

The power supply company involved is FortisBC Inc, a gas and electric utility that serves more than one million customers and delivers about 21 per cent of the province’s total energy consumption. Engineers at FortisBC identified Glenmore Substation as a facility that could benefit from installation of protective wildlife covers and also a candidate for trial application of other solutions to mitigate wildlife intrusion and its impact. According to Engineering Manager, Aram Khalil-Pour, protecting conductors and live fittings as much as possible will mitigate the risk of phase-to-ground or phase-to-phase faults should any animal breach electrical clearances.

In regard to the broader goal of preventing animals from even entering, Glenmore and other targeted stations with past vulnerability to wildlife incursion are now part of an internal Field Study. As part of this research, each has recently been equipped with special ultrasonic devices whereby an electronic speaker emits sounds that are said to frighten small animals. Since rodents such as mice and squirrels hear at a frequency above 20 kHz, the noise emitted is inaudible to the human ear. Two different options are under study – an indoor version intended to keep mice and rats from establishing nests in control rooms and enclosed equipment and an outdoor version meant to keep squirrels and other small animals from approaching equipment such as transformers.

Operations Supervisor for Substations, Keith Ankerman, accompanied INMR to Glenmore and reports that the operating experience with the wildlife covers, which were installed in only a day with the station taken out of service, has been positive although the time of their installation is still relatively brief.