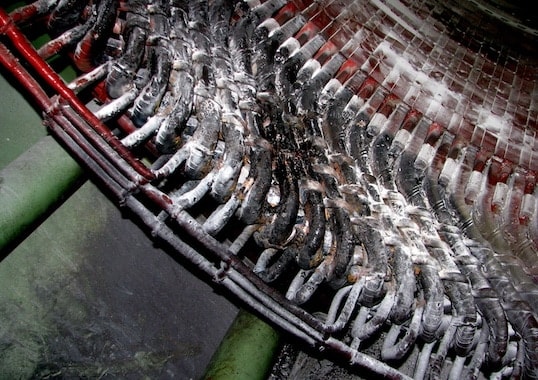 Lightning protection is usually associated mainly with distribution networks or transmission lines and substations. However, another area in the electricity supply paradigm where application of arresters needs to be considered are relatively small power stations, also known as distributed generation (DG) plants. These facilities, located in populated as well as remote locations, typically generate up to 100 MW and are either hydro and wind-powered or rely on a range of fuels from natural gas to methane to diesel.

A 100 MW diesel power station, located on the southern coast of the Dominican Republic, supplies electricity to an inland mining facility some 50 miles (80 km) away.

This facility suffered a major failure that required the complete rebuild of one of its 10 MW generators due to a fault during operation. After initial investigation, it was determined that the likely cause was a lightning or switching surge. Then, within only months, a second generator also failed in a similar manner. Again, it appeared that the stator insulation had been compromised, since it is well known to have a low impulse withstand capability.

Each failure ended up costing more than US$ 200,000 in repairs. To make matters worse, the plant had to operate at lower capacity during the repair period, even as their prime customer was demanding ever more power.

The plant’s maintenance scheme was good, with generators monitored routinely for partial discharges and balance issues. Moreover, there was no obvious indication or precursor to either failure. Given this, a first step towards understanding and resolving the problem involved surveying the generators, the internal switchgear and the generator step-up transformer (GSU) station.

Figure 1 is a simplified system schematic that shows that the surge arresters in the system are located downstream of the breaker and not on the generator side.

Identifying the Source of the Surge

There are a number of possible sources of surges that can damage a power generator or its associated equipment, including:

2. lightning surge entering the station along a phase wire;

From Figure 1, it would appear that the generator is well protected from the external power system, with the GSU between the incoming transmission line and the generator. Indeed, running a system model confirmed that the GSU does in fact offer significant protection to the generator. Arr_0 is the only arrester placed in front of the 69/23 kV transformer and offers it protection.

Figure 2 provides the input and output of the GSU with a high current surge just outside the generator substation. With the GSU transformer configured as it was, a fast ringing surge with a maximum of 10 kV could make it onto the generator bus (i.e. the low side of GSU), although it is not likely that a 15 kVrms rated generator would be affected by such a surge.

Experience also suggests that a switching surge entering from the transmission line would be of lower magnitude and therefore also not a likely source of damage to the generator.

The only other possible source is from within the generator switchgear. Indeed, maintenance records revealed that a 15 kV vacuum switch had failed at the same time as the generator. Failure of this fast operating switch could mean that a fast or slow rising surge could have been generated at the switch situated directly in front of the generator. While the surge arrester at the breaker would limit the surge magnitude that travels toward the step-up transformer, it would have little effect on the generator side of the switch. As can be seen from Figure 2, the only component between the generator and breaker is 10 meters of underground cable.

Figure 4 shows a typical magnitude and waveshape of a surge that could be generated by the pre-strike of a vacuum switch. The green trace in the figure is the waveshape curve when it reaches the generator; which looks like an open circuit and causes the amplitude to double to close to 50 kV. The circuit impedance and short distance to the end of the circuit cause a ringing surge at that point. Because generator windings have among the lowest dielectric strength of all power equipment components, a 35 to 40 kV fast rising surge could cause damage due to a winding to case fault. This is what actually occurred.

Transient modeling showed that if an arrester was installed at the generator (as in Figure 3), the surge magnitude would be reduced a few percentage points as shown by the blue trace in Figure 4. But it would still have significant magnitude. Therefore, in this case, arrester protection alone would likely not have been adequate. However, with a surge capacitor installed in front of the generator, along with the arrester, surge magnitude would be significantly reduced and made harmless to the generator (as per Figure 5).

Installation of surge packs at this generator resulted in no further failures for more than 3 years, even though vacuum switches have continued to be an issue.

A second example of how important good surge protection is at power plants also involves a smaller generator, this time located at a large landfill where collected methane is used to power 8 reciprocating engines and 8 x 1 MW generators. The power system in this case is a typical overhead 35 kV network with a well grounded four wire star system and the failures here were in the switchgear itself, not the generator.

Figure 6 is the simplified schematic for the system.

Since the generators are isolated from the 34.5 kV collector system, they are well protected from switching and incoming lightning surges. The switchgear, however, located in a common control room, was not well protected and failed.

Again, a transient study quickly demonstrated that, if a lightning event occurred within a few spans of the generator, it would travel to the riser pole – the power station’s first line of defense. The arresters here would normally clamp the voltage to an acceptable level across the underground cable. But, with a 25 ohm ground on the pole, the voltage at the pole top actually soon increases to significant levels (as seen in Figure 7).

With no additional arresters or capacitors in place at this small 1 MW power plant, the riser pole arresters at the entrance of the station do not in themselves offer adequate protection in the event there is a strike near the incoming line. As per Figure 7 depicting an average strike of 31 kA near the station, voltage levels at the switchgear easily exceed its 171 kV BIL.

However, with an arrester installed at the plant’s main breaker (PT1 on the schematic), switchgear voltage is reduced to 140 kV – offering a respectable margin compared to its 171 kV BIL. The addition of a capacitor in this case, would not have made much difference (see Fig. 8).

Given the increase in distributed generation throughout the world, great care must be taken to mitigate both internally and externallygenerated surges. As in these two examples, several ‘rules of thumb’ can be applied:

1. Install arrester-capacitor combinations in front of generator windings to offer protection to these especially vulnerable windings.

2. Tie the pole ground of the first pole (where the tariff metering is installed) to the station grid if possible. If not possible, ensure it has the lowest possible ground resistance possible.

3. Apply arresters to protect switchgear from outside surges that inevitably will come in on the export line.

4. Consider the end point on collector systems since the voltage will double and easily cause even a relatively low incoming surge to become one that leads to insulator failure. Apply end point arresters to avoid this.

5. If in doubt, adding an arrester is the most cost effective surge damage insurance.

6. Whenever necessary, conduct a study that will result in a detailed understanding of the transient environment for all types of surges.