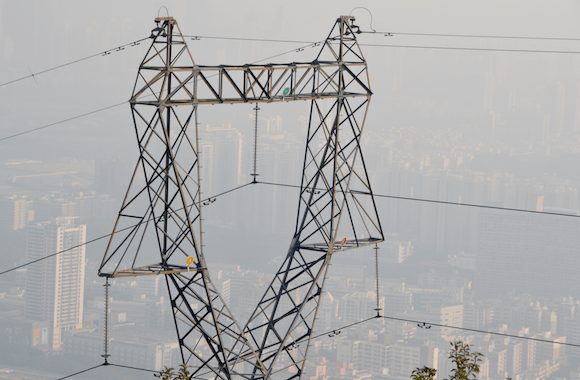 The surfaces of insulators operating for years on power networks inevitably become polluted to some degree. Accumulation of contaminants is especially serious in coastal areas or where there are nearby industrial emissions or major highways. Under damp conditions, such as fog or dew, insulator surfaces are wetted allowing soluble salts in the pollutants to dissolve and form a conductive film. Leakage current starts to flow along the surface and there are arcing discharges as well as dry band formation. This process can quickly progress to pollution flashover, leading to tripping of transmission lines or substations. The only requirements are pollution accumulation and wetting. Moreover, since level of pollution accumulation and wetting tend to be similar within a particular service area, insulation performance is universally reduced. After there has been a pollution flashover on one insulator, it is likely that adjoining insulators will flash over after reclosing takes place. As such, once pollution flashovers occur, reclosing will tend to fail, causing long, extensive outages, i.e. a serious threat to the stable operation of any power system.

To reduce pollution flashover accidents, a number of remedial measures are available, including:

1. Adjusting creepage distance to reinforce insulation, mainly by increasing the number of discs in a string or by using so-called ‘anti-pollution insulators’, which in China typically consist of double or triple layer aerodynamic sheds on each disc;

3. Coating surfaces of porcelain and glass with a thin layer of hydrophobic material or applying silicone rubber composite insulators.

Among these, the last has been shown to result in the most significant improvement in insulator pollution performance. Analysis of operating statistics at the State Grid Corporation of China and the China Southern Power Grid shows that pollution flashover accidents have been significantly reduced. In fact, incidence of tripping caused by pollution flashover is now much lower than from lightning, icing, birds, wind and wildfire. This significant decrease in pollution flashover problems has been attributed to extensive use of silicone insulators as well as growing application of hydrophobic RTV silicone coatings. Presently, the number of composite insulators in service on Chinese transmission lines exceeds that of porcelain and glass. Moreover, the quantity of composite insulators now being used at substations is growing as well, such as application of composite insulation technology on all equipment at the 750 kV Shazhou Substation in the North-West. Local experts are optimistic for composite insulation on HV & UHV equipment across China.

RTV silicone coatings have also been applied extensively and porcelain insulators at many substations have already been coated. With continuing improvements to coating formulation as well as application process, results are now mainly satisfactory.

Since most tension string insulators in China are still porcelain or glass (whereas suspension strings are mostly silicone), the tension string is often the weak part of line insulation. For this reason, RTV silicone coatings are being applied to improve their pollution performance. At the same time, to ensure consistent quality the SGCC has begun requiring that all porcelain and glass insulators applied to critical UHV lines are pre-coated before being put into service. Close co-operation between insulator and coating manufacturers as well as use of new application processes have resulted in a significant improvement in quality such that pre-coated insulators from the factory are much better than those coated on-site.

While there have clearly been achievements in terms of combatting pollution flashover, this risk can never be disregarded. This is because pollution flashover incidents link closely to meteorological factors and severe weather events will contribute to their re-emergence as a threat.

Given the development of application of silicone insulators and RTV silicone coatings n China, the following are key topics that will require future investigation:

2. Mechanics of breakage of core rods on composite insulators and how to prevent it;

3. Expected service life of RTV coatings and optimizing the re-coating process when this becomes necessary.