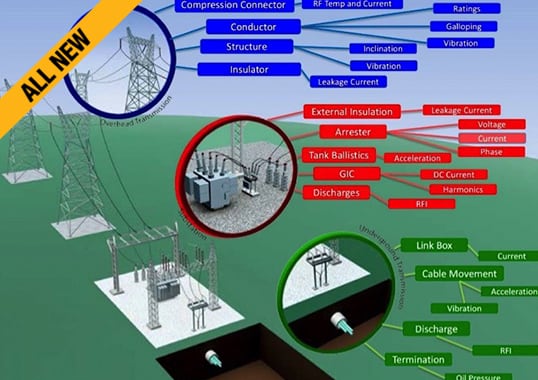 The 543 contributions made during this past CIGRE General Session in Paris represented a milestone for this event and comprise a vast information resource about developments in the world’s electrical power sector. This Column completes a review of some important Papers from Study Committees C4, B3 and D1 in terms of overhead lines and testing.
Paper C4-205 investigated the lightning shielding performance of a 420 kV fully composite pole (Fig. 1). This pole consists of different insulating modules and allows extreme line compaction. Due to smaller dimensions compared to conventional towers, foundations can be significantly reduced while pre-manufactured modules mean shorter erection times. Moreover, due to the superior strength-weight ratio of composites versus steel, installation costs are reduced due to lower weight. However, due to the absence of grounded structures, positioning of shield wires becomes critical for phase protection against lightning strike.

Simulations were performed using different electro-geo-metric models and, based on findings, it was determined that a 30° inclination of phase conductor modules would provide sufficient protection. Moreover, compaction also helps since it makes the composite pole less susceptible to lightning strike compared to Eagle or Danube tower configurations made of conventional steel. Some details still remain unresolved, such as how to control field stress on the phase-to-phase insulation, etc. But the level of compaction achieved is impressive and could be considered a ‘door opener’ for aesthetic transmission lines with tremendous cost advantages compared to HV cable solutions.

Paper B3-301 discussed a general concept on how to make network monitoring more ‘intelligent’ using radio frequency sensors (see Fig. 2). A comprehensive set of sensors is in development to monitor various parameters of an overall transmission grid, including overhead lines, cables and substations, in order to obtain real-time information about their condition. Another develop-mental goal was looking for minimum cost so as to permit wide deployment of different sensors with not only overall improvement in reliability but reduction of maintenance costs as well. Communication with sensors utilizes the same radio frequency (RF) platform to collect data and integrate it with so-called Utility Asset Health Systems. For example, the paper presents practical results with RF leakage cur-rent sensors installed in the Gulf Coast at Panama City, Florida. The leakage current behavior of insulators being monitored was also evaluated under laboratory conditions. Such testing served as reference for each individual insulator type so as to identify suitable alarm levels for sub-sequent outdoor operations. These were established based on maximum permissible current in terms of pre-arc stability and frequency of occurrence of leakage cur-rent pulses. Experience so far is promising and further refinement in the sensors will be an ongoing task linked to ongoing development in electronics.

Paper D1-311 investigated the impact of variable loading on the behavior of polymeric station post insulators with massive solid core rods. This scientific research was a logical next step once the authors had completed similar work on polymeric suspension insulators under cyclic loads. In spite of field experience that shows that it is often the metallic hardware that fails before the brittle resistant insulator, such investigations support future standardization, especially faced with ongoing reduction of product redundancy (i.e. over-engineering) due to cost reduction pressures.
Performance of a post insulator is defined by its maximum design cantilever load (MDCL) as well as its specified cantilever load (SCL). Another important parameter is de-flection at MDCL. Typically, the last value is the prior design criterion because of lower E-modulus of FRP rods in comparison to porcelain. This leads to greater required rod diameters based on mechanical stress in the rod and the rod-to-end fitting interface.

In the case of high strength post insulators, design of the base fitting and steel grade of the bolts are both important to behavior of the complete system. This is confirmed by the result that, after a design test with 1.1 x MDCL for 96