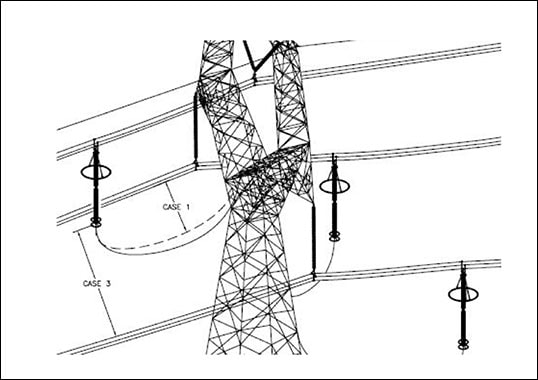 This edited contribution to INMR by C. Wang, J. Kell and W. Chandrasena of Manitoba Hydro presents a novel method to optimize structure design based on application of transmission line surge arresters.

Manitoba Hydro’s electrical system depends on power generated by hydraulic generating stations in the north whose output is transferred southward hundreds of kilometers along three HVDC lines. This HVDC system carries about 70% of the Province’s total generation supply. In the event of extended drought or an HVDC outage, supply becomes restricted to generation connected to Manitoba Hydro’s AC system, which relies on AC interconnections with the United States and neighboring provinces. But such a restricted supply of power would be inadequate to meet provincial demand and could necessitate rotating blackouts for months. The potential shortfall has been growing steadily over the years and, given growing power demand, system load requirements have increased. Currently, Manitoba Hydro’s import capacity is approximately 700 MW.

The new Manitoba-Minnesota Transmission Project (MMTP) is the province’s second 500 kV AC line connecting to the U.S. power grid. This transmission line will run 575 km and connect Dorsey Station in Canada to Iron Range Station in the United States. The objective of the project was to deliver contracted power supply to the U.S. and also to ensure reliable energy supply to Manitoban customers in the event of prolonged drought or unforeseen equipment failures.

The MMTP will have 60% series compensation to maintain a 2000 A continuous current rating and this 1440 MVar series capacitor could become among the world’s largest at 500 kV. This size of series capacitor combined with long line length would result in very high switching surge voltage, affecting both tower design and future live line maintenance. To address this, Manitoba Hydro conducted a detailed switching surge study to help optimize design of the new line’s towers.

The tangent suspension insulators commonly used on transmission lines are subject to swing due to wind. Sufficient clearances between the live end of the insulator string and any grounded component of the support structure must be maintained to provide safe and reliable operation of the line under wind. Based on recent study as well as review of historical meteorological data, three wind conditions were considered in design of the MMTP tower top geometry. The first is a high wind condition, expected to occur only rarely while the system is under power frequency voltage. The second is moderate wind, assumed to coincide with a switching surge overvoltage. The last is a nominal wind condition, expected to occur frequently and therefore most likely to coincide with live line work.

All wind conditions were applied only to I-string insulators at cross-arm locations since V-string insulators, within tower windows, are assumed to have limited movement during these wind conditions. CIGRE Technical Brochure 348 discusses how to ensure adequate clearance and prevent flashover between conductors and structure during still air as well as swing positions. High wind is defined as the 50-year return period design condition which will very rarely occur while the system is under power frequency voltage only. The moderate wind condition is defined as wind pressure during 99% of the time (CIGRE 1%), i.e. the insulator string is exposed to this type of wind condition frequently enough to coincide with a switching surge overvoltage. The 40 km/h wind condition is defined as the maximum wind speed during which live line procedures can be safely executed by qualified personnel.

The structure of an arrester is quite simple for most standard applications and consists of a stack of cylindrical MOVs (non-linear resistors made of ceramic material), placed inside a housing. Modern metal-oxide varistors consist of approximately 90% zinc oxide, a semi-conductor, and about 10% additives that act as doping elements. Grain size of the raw materials is only about 1 µm, necessary to achieve high homogeneity when wet-mixing ingredients and important towards quality of the end product. The second important component is the housing that provides mechanical and dielectric strength, connection to the energy system and earth and protection against environmental stresses. Over the past decade, polymer-housed surge arresters have become more and more popular due to their compact design, lower weight, more efficient production and better performance.

Switching surge overvoltage on transmission lines can be effectively reduced utilizing TLSAs, which also help optimize tower design and right-of-way width. In the case of the 500 kV MMTP, TLSAs allowed reducing the switching surge factor from 3.5 p.u. to 2.5 p.u. when combined with other design enhancements identified for the series capacitor. A lower switching surge factor also helps transmission line designers optimize tower design to make it more compact and reduce required land. Significant cost savings are achieved in comparison with all other options.