Composite insulators have achieved a high level of technical maturity over the decades by gaining service experience in applications across all voltage classes. Nonetheless, to ensure reliable long-term operation, it is necessary to optimize materials and components such as the end fitting, FRP core rod and housing, including their interfaces to one another. During such design and optimization of electrical, mechanical and material properties, there also needs to be consideration given to aspects including ease of processing of materials and components during manufacture as well as designing for special environmental service conditions.

This has resulted in a trend toward tailor-made solutions in regard to further development of polymeric materials for composite insulator designs and strings. This process has only been reinforced by the move toward ultra-high voltages (> 800 kV), expansion of HVDC transmission, new requirements defined in utility specifications and more compact line designs for increased public acceptance. On the other hand, maintaining the quality of composite insulators for expected long-term performance is another key trend, all the more so since composite insulators have transitioned from being exclusive and expensive to now being cost-optimized commodity products.

These trends are also reflected in refinements to existing test methods to verify sufficient quality of composite insulators as well as in development of new test methods aimed at better transferring service experience into the design stage of these insulators.

This edited contribution to INMR by Christiane Baer at PFISTERER Switzerland focuses on current trends and aspects for development of new high temperature vulcanizing (HTV) silicone rubber formulations. It also gives specific examples for both observed trends, i.e. evaluation and development of silicone formulations with respect to new requirements based on service experience as well as on the applicability of newly developed test methods and their effect on new material formulations under development.

The following discussion reviews development of the housing material of a tailor-made nitric acid resistant, high temperature curing (HTV) silicone rubber formulation. The utility specification in this case required that a cut insulator section needed to be stored for 100h at 30°C in 1 molar nitric acid. The material would pass this test if, after a subsequent drying period of 12h at 80°C, no crack formation was observed on the housing surface. This special requirement had been included in the utility specification after a specific situation of insulator failure initiated by housing material degradation, crack formation and FRP core exposure. This occurred from strong corona discharge activity due to improper field grading and nitric acid generation under the specific service conditions with low rainfall over the year.

Acid attack is mostly related to decomposition of fillers such as aluminium trihydroxide (ATH) in the HTV, as per (1):

During the initial investigation, nitric acid (HNO3) resistivity was considered for commercially available and experimental formulations of peroxide curing HTVs (see Table 1). Tests were performed by storing three plate specimens with a weight of approx. 20g of each material and for different time intervals up to 1000h in approx. 1 liter of 1 molar acid at room temperature of 23°C ± 1°C.

After defined times, test specimens were extracted from the acid bath, dried at 80 °C for 12 h and evaluated as follows:

• Tensile strength and elongation at break;

• Visual inspection and appearance of degradation.

The investigated material formulations with ATH filler showed significant crack formation (see Fig. 1). To evaluate these crack formations, depth of the cracks was measured (see Fig. 2). As expected, formation and depth of cracks for HTV 4 with non-silane treated ATH was most critical while the unfilled HTV (meaning without ATH) showed no crack formation. Other HTV formulations fell somewhere in between these two extremes.

Considering the mechanism of so-called stress corrosion cracking that happens during crack formation by nitric acid attack, three conditions must be fulfilled for its occurrence:

• presence of a chemical substance that can corrode the material;

• material susceptible to corrosion by this chemical substance; and

• mechanical stress applied to the material.

From this, it is clear that the highest potential lies in improving material formulation either by replacing the ATH filler by an inert one, by optimizing silane treatment, particle size and distribution of the ATH filler, or by implementing an additive to serve as buffer for the acid. Most challenging in terms of developing an acid resistant HTV is achieving optimization without at the same time compromising other material properties, especially maintaining a high level of tracking and erosion resistance, mechanical properties and ease of processing in general. Also, all required material and design tests according to the applicable IEC standards would need to be successfully passed. Therefore, given the limited choice, different typical HTV components were investigated and evaluated, such as base polymer, curing agent, different ATH fillers (including particle size, distribution and surface treatment) as well as further additives, all with respect to:

• shows a hole (bulk erosion) due to intensive erosion;

Fig. 6 shows the set-up before starting the test. Test results are analysed by evaluation of the weight loss of the specimen during the test as well as the length, width and depth of any observed erosion. Results of mass loss after nitric acid storage are shown in Fig. 7. As expected, according to Fig. 3, an increase in mass loss with increasing storage time can also be observed for the reduced nitric acid concentration of 0.1 mol/liter.

Fig. 8 gives the test results of the tracking and erosion tests after nitric acid storage for defined intervals. Evaluation of erosion depth is considered as the most characteristic parameter for silicone elastomers in this test.

Area of the superficial erosion increases with time of acid storage. While after 96h it only covers a small area in the middle between the electrodes, this erosion covers the entire area between the electrodes after 1008h storage. After 2184h, a complete layer of silicone is eroded between the electrodes. This effect is thought to be related to nitric acid attack with increasing intensity over the storage time by locally dissolving the ATH filler from the surface of the silicone rubber.

An essential interface for composite insulators in service is that between the core and the housing. Only good adhesion can assure reliable long-term performance by avoiding risk of moisture accumulation and development of flashunder along this critical interface. In recent years, the number of reports of damage where the root cause relates to lack of adhesion has increased. This has been observed for post, long rod and hollow core insulators. Given this experience, an up to now missing test method for quantifiable testing of adhesion along the core-housing interface has been developed based on extensive research. This development has included an international round-robin test with participation by various testing laboratories and institutes. The so-called ‘pull-off test’ is based on the water diffusion test specified in IEC 62217 and includes a mechanical adhesion test.  Initially, the water diffusion test was developed to evaluate hydrolysis resistance of the insulator core. However, due to the high quality of FRP rods today, it further developed into a method for evaluating the quality of the interface.

Here, the pull-off test was used to evaluate existing insulator designs to gain more experience with this new method. Moreover, it was decided to evaluate the suitability of new silicone formulations during development, since proper chemical bonding as a key property also relates to housing material formulation.

The pull-off test was conducted as below and with the following criteria:

The tests, which involved two types of long rod (A1, A2), one post (A3) and two types of hollow core insulators (B, C) from different manufacturers and where HTV and RTV (room-temperature curing silicone rubber) were used as the housing material are shown in Table 4.

In a further step, this new method was applied for evaluating and selecting a housing material for sufficient interface adhesion. A total of 18 different HTV formulations were investigated using the pull-off test. Sample insulators were manufactured by injection moulding of these different formulations onto FRP cores with approx. 18.6 mm diameter. Using identical conditions and designs to produce sample insulators, a direct comparison of leakage current and pull-off tension was possible. Fig. 11 shows examples of leakage current measurements.

Results of test samples 3 and 7 showed significantly higher leakage currents. A subsequent manual adhesion test confirmed lack of adhesion for these samples. However, unsatisfactory adhesion was evident for the rod surface of sample 4 and also slightly for sample 14. This was not recognizable based only on the leakage currents (see Table 5) and was attributed to localized reduction in adhesion. But this did not have an integral effect on the entire 30 mm length of test specimen and increase in leakage current due to accumulation of moisture at the interface.

In summary, this test method is also regarded as suitable for evaluating new housing material formulations during development.

In another example, an alternative FRP rod supplier for composite insulators was tested and the pull-off test used to confirm proper adhesion between the housing and the core. Preliminary investigations confirmed suitable properties according to IEC 62217 and FRP rods successfully passed the water diffusion test as well as adhesion with the standard housing material during a manual adhesion test. Nonetheless, insulator samples showed unexpectedly higher leakage currents in the range of ~200 µA (versus the expected ~60 µA). Pull-off tension of ~2.0 N/mm2 was in the expected range above 1.5 N/mm2. Additional evaluation of the type of fracture showed proper adhesion with good chemical bonding.

Since the housing material was a standard formulation, which had also passed this test successfully with the currently used FRP rods, the only root cause could be chemical interaction of the FRP rod surface-primer and housing material with the salty solution during boiling. The question then arises whether the new rod supplier passed the pull-off test or not. In spite of exceeding the leakage current criterion, proper adhesion could be confirmed during pull-off tests, which was the main aim of this investigation.

To generate some overall evaluation of the suitability of this test method, all tested long-rod insulator samples having HTV housings were ranked with regard to correlation of the leakage current with the pull-off tension, with distinction made between cohesive and adhesive fractures (see Fig. 12).

In summary, no clear correlation was found between pull-off tension and leakage current for the long-rod insulators investigated and no conclusions could be drawn about the type of interface fracture. In particular, proper interpretation of leakage current is seen to be challenging, since this is an integral parameter influenced by the test arrangement in general and specifically by sample dimensions (i.e. the insulator shank diameter). For any proper analysis of potentially too high leakage currents, the contributions made by the FRP rod, the housing and the interface must all be taken into account and identified.

In conclusion, for any correct evaluation of results from the newly developed pull-off test, the combination of leakage current, pull-off tension and type of interface fracture are all seen as meaningful parameters. Additional experience should be gained to determine suitable limits. Currently, this test is under consideration for standardization in IEC 61109 as a product standard for composite long rod insulators.

Current trends in composite insulator technology are related to strategic decisions made by users. These include level of demand for UHV and HVDC applications as well as special requirements in any utility specifications that call for new product developments or that require distinct material properties, for example a nitric acid resistant HTV formulation.

To maintain the required high level of quality of composite insulators and to assure expected reliable long-term performance, new test methods are presently under development and consideration for standardization, as exemplified by the newly developed pull-off test to evaluate proper core-housing interface bonding. 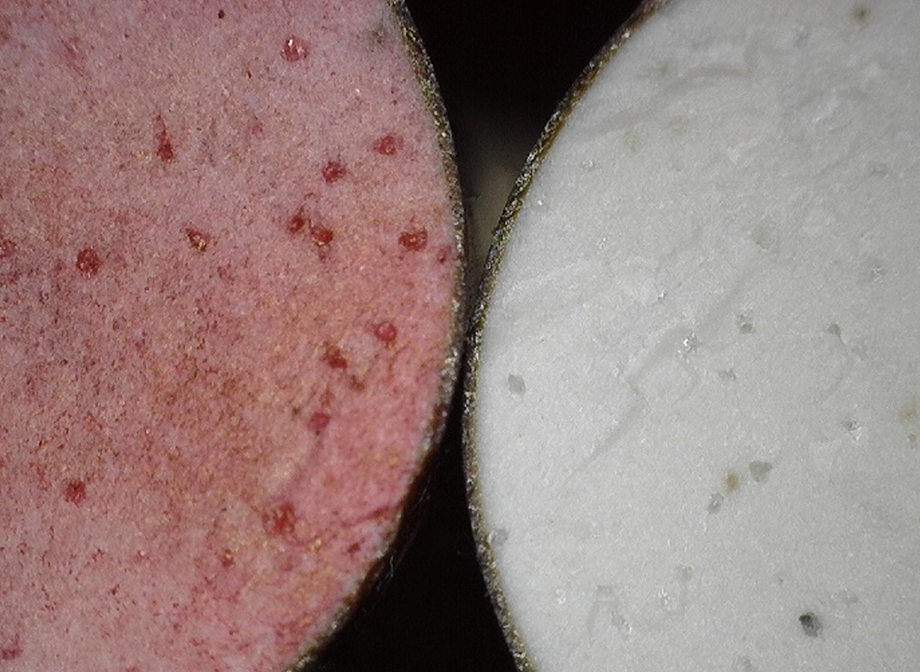