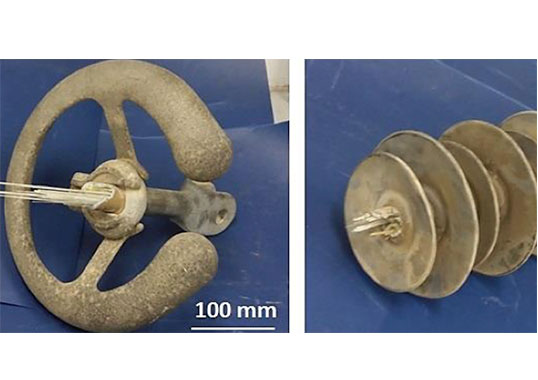 Insulators have traditionally been one of the major problem areas affecting the reliability of the MV and HV overhead networks in Israel. For example, years ago management estimated that about one in every four permanent faults were directly traceable to insulator failure, with this proportion possibly rising to nearly one in three if so-called unexplained faults were also considered. Climatic conditions associated with the country’s sub-tropical location have been an especially important factor in this regard. Israel has a long dry season lasting eight months during which all kinds of pollution accumulate on insulators. This pollution layer tends to be adhesive and therefore is only partially cleaned away during the ensuing four months of rain. On top of concerns with pollution, in the past a large number of inferior porcelain insulators were installed on the network. Some of these experienced serious problems associated with separation of the pin from the body, especially before vibration dampers were incorporated as the norm in the design of tension towers. Finally, Israel lies along a migratory route for hundreds of millions of birds travelling between Europe and Africa. The density of these birds and the adverse impact of their highly conductive droppings on insulators required monitoring this problem closely as well as introducing a number of remedial measures.

Over the years, Israel Electric tried to cope with these issues by means such as over-insulation as well as special shed profiles offering extended creepage. In addition, glass insulators were specified for certain lines whose performance required improvement. However, none of these solutions really changed the basic dynamics of the situation. Given the importance of these historic problems, in the early 2000s a team of specialists was established who would devote attention to research insulator failures as well as evaluate alternative solutions to prevent these. In addition, the utility built an energized test station located in the desert in order to monitor the comparative performance in such an environment of different designs of insulators, arresters and other key network components.

Israel Electric began initial use of composite insulators in 1987. Ironically, the original motivation for their selective installation at the time was resistance to vandalism occurring on some distribution lines. Given this narrowly defined selection criterion, composite insulators were specified even though their life expectancy at the time was estimated at only about 15 years and in spite of an acquisition cost which was significantly higher than comparable ceramic insulators. Subsequent years were marked by a growing understanding of the characteristics and features of these types of insulators. Also, more and more discussions began to take place between engineers and manufacturers, laboratories and independent experts in the field. At the same time, various local test facilities were put in place to allow the utility to make its own assessment of how these insulators were performing under local operating conditions. This process resulted in growing confidence as well as consistent increase in numbers of composite insulators installed such that Israel Electric became among the first power system operators worldwide to standardize composite type insulators across its entire grid.

Transmission infrastructure is exposed to constant potentially damaging environmental stresses such as wind, natural and artificial pollution, heat, humidity and UV radiation, among others. In recent decades, application of composite non-ceramic insulators has increased greatly among transmission system operators worldwide due to advantages such as low weight and cost, high mechanical strength-to-weight ratio, high damage tolerance, flexibility, excellent impact resistance and relative ease of installation. Indeed, millions of insulators of this type have been successfully applied worldwide on transmission lines ranging from 69 to 735 kV and higher. At the same time, growing service experience has made it apparent that insulators of this type have unique potential weaknesses that can make them especially vulnerable to certain types of failure over time. Common failure mechanisms in this regard include brittle fracture and failure from over-crimping. As a result, instances of failure of composite insulators as well as associated mechanisms have been widely studied for the past two and half decades. For example, notable studies were based on Fourier Transform Infrared Spectroscopy (FTIR) – a technique to obtain an infrared spectrum of absorption or emission of a solid, liquid or gas. This research established that nitric acid was the main corrosive medium that formed on insulators as a result of corona discharge and eventually caused the FRP rod to corrode and fail through brittle fracture mode (i.e. stress corrosion). A formation process for nitric acid was suggested and, in certain cases, it was even possible to pinpoint specific areas on the insulator where acid was at its highest concentration, both during and after failure.

Other studies investigated the stress corrosion fracture process under nitric acid and comparative mechanical performance of a number of types of FRP rods was studied in experiments. This resulted in clear presentation of important brittle-fracture process characteristics, including specific guidelines for identifying the stress corrosion fracture mechanism. Similarly, further studies investigated the mechanism process involving deterioration of the silicone rubber material that protects the FRP rod. Such deterioration included changes in mechanical properties and filler-related weight loss. Silicone rubber deterioration was also investigated in the context of loss of hydrophobicity – an important consideration in assessing any decrease in insulator resistance.

A fiber-reinforced plastic silicone suspension insulator belonging to the Israel Electric Corporation failed catastrophically on a 400 kV transmission line during service along the humid southern Israel coastline. The failure, which resulted in a high cost local outage, occurred during the summer of 2016 after 15 years of service, even though the suspension insulator had a declared life expectancy of 30 years. An investigation was therefore commissioned to establish the root cause of failure. The insulator involved had a length of 4 meters and included 75 weathersheds with alternating diameters of 169 mm and 137 mm. It was equipped with two grading rings with diameters of 210 and 310 mm and two metal connectors/fittings at each side. The rod core of the insulator was composed of FRP, housed with a silicone rubber protection layer which is also the material composing the sheds. Rod diameter, including housing, was 30.3 mm and the metal fittings were connected to the rod by means of crimping.

Visual examination of the FRP rod and housing fracture surface revealed that the fracture had distinct zones, suggesting a multi-stage failure involving brittle fracture and fibre pull out. The silicone housing had undergone chemical deterioration at a point just above the area where it was suggested that the FRP had also deteriorated chemically. Stereoscopic examination revealed that the degraded area in the housing included a deep crack along the entire width, from external to internal surface. This enabled passage of polluted mediums from the surface into the FRP rod. Scanning electron microscopy revealed physical damage had occurred to the FRP material and chemical analysis showed the nature of the acidic pollutant that had infiltrated the housing and caused corrosion. Analysis also revealed presence of nitrogen-based species on the external housing surface as well as chemical deterioration of the housing. This was partly responsible for creating conditions that enabled crack development along the width of the housing. Separately, the chemical composition of environmental pollutants on the housing was examined. SEM imaging was also used to examine the fracture surface of the fibres under high magnification while ‘fractographic’ evidence helped solidly establish the specific failure mechanism in this insulator.

At the 2019 INMR WORLD CONGRESS, Israel Electric Materials Specialist, Daniel Luder, will present a detailed review of this topic.

Renowned Expert Prof. Masoud Farzaneh Will Report on Impact & Mitigation of Icing on Power Networks at the 2019 INMR WORLD CONGRESS

January 24, 2019 Comments Off on Renowned Expert Prof. Masoud Farzaneh Will Report on Impact & Mitigation of Icing on Power Networks at the 2019 INMR WORLD CONGRESS