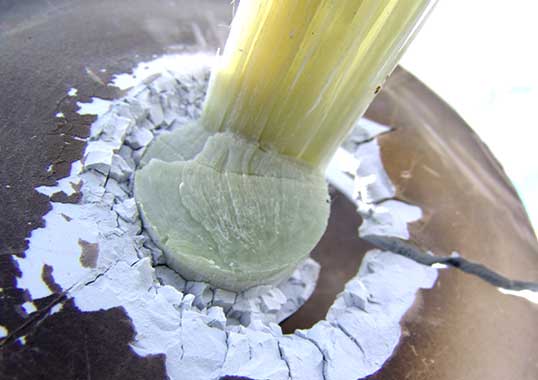 In late 2016, a non-ceramic insulator that had been in service for 14 years experienced brittle fracture failure and triggered a single-phase fault on transposition tower No. 4 of the 400 kV Caruachi-Macagua transmission line in Venezuela. This edited contribution to INMR by retired transmission engineer, Cristian H. Gutiérrez Aguirre, of Corpoelec documents the factors that contributed to the incident including period in service, failure of the materials that make up the insulator, absence of key accessories such as corona rings as well as external factors and environmental pollution.

Corpoelec’s 400 kV transmission system consists of 4300 km of overhead lines and more than 10,350 towers. The first transmission line in Venezuela went into commercial operation in early 1969 and used glass and porcelain insulators. Use of polymeric type insulators at 400 kV began only in 1998 and these are currently installed on more than 2,500 towers along of 980 kilometers of lines – representing 23% of the entire transmission system.

The 400 kV Caruachi-Macagua Transmission Line, built during 2002-2003 and energized in December 2003, is located in the Puerto Ordaz area and serves to interconnect the Caruachi and Macagua II Hydroelectric Power Plants. It runs 28.6 km with 69 towers and its route is flat, located between 80 and 90 m above sea level. It has four conductors per phase, i.e. ACAR 1.024.5 MCM 30/7.

On 10:20 am on November 12, 2016, Substation Maintenance staff reported to the Regional Control Center that they had heard a loud noise from dead-end tower No. 4. They also reported that an insulator was broken and detached. Immediately, Transmission Line Maintenance personnel moved to the site and found that an insulator serving as a retention element between phases A and C, had broken and detached at one of its ends. Fortunately, since it was a double chain arrangement, the conductor did not fall to the ground. Initial inspection of the failure with binoculars resulted in a request for line de-energization since significant damage was detected in the insulator bar supporting the mechanical load of the four conductors (see Fig. 1).

The failed insulator was, in parallel, supporting the mechanical load exerted by phase A and C conductors. Consequently, the double polymeric insulator arrangement operated at 400 kV phase-phase. Tower No. 4 on this line is a special tower, where inversion or rotation of phases A and C is carried out to obtain the correct phase sequence for entry into the Substation. Fig. 2 depicts the arrangement and how phases are rotated:

To assess the cause of the failure, a photo record of the condition of each insulator was assembled and detected the following:

a) All insulators installed on Tower No. 4 had corona rings installed, both at the energized and at the tower ends, except for the arrangement of double insulators that electrically separated phases A and C.

b) The insulator located next to the one that had failed was itself in a critical state, with considerable loss of its polymeric housing as well as serious damage to the end region of the fiberglass core rod. There was also pitting on the surface of the hardware. Nonetheless, this insulator still managed to withstand the mechanical load of the conductors, calculated at 5.2 tons.

c) The insulator that had failed by brittle fracture was carefully disassembled and transferred to a laboratory where a scanning electron microscopy test would be performed. Several detached weathersheds (skirts) were found on the ground.

In both cases, the insulators came from reputable manufacturers in Germany and the United States. In the case of the failed insulator on the Caruachi-Macagua transmission line, certain questions remain:

1. Although the insulator located next to the failed unit was subjected to the same conditions of electric field and corona, it did not experience brittle fracture even though it had to endure the sudden additional mechanical moment that occurred when the insulator fractured and also supported the mechanical load of four conductors?

2. Why did damage to the polymeric sheath of the insulators fixed at the end of phase C not also occur in phase A?

1. This incident demonstrates that in the case 400 kV transmission lines, it is extremely important that polymer insulators are equipped with corona rings installed at the energized end, whether in suspension or dead-end towers. Otherwise, life expectancy risks being reduced to a period not exceeding 14 years due to progressive damage caused from corona effects in the region surrounding the end fittings. Such damage is due to high electric field concentration that releases nitric acid and destroys the silicone rubber housing. The fiberglass core rod then becomes exposed to the environment allowing entry of water. Flashunder or brittle fracture will be the end result. It is important to note that the fault that occurred in this particular insulator was not due to a manufacturing defect but was caused solely by absence of a corona ring, which was not installed during the line’s construction.

2. It is recommended that UV corona inspection technology be established in the maintenance practices of power utilities. This condition-based monitoring tool represents a powerful methodology to detect advanced root cause failures and allows actively monitoring condition of key components on transmission lines as well as at high and extra high voltage substations. Depending on number and length of lines being operated, annual inspection frequency should be established at the least.

3. It is recommended that when power companies select polymeric insulators for new line projects, they include installation of corona rings designed and supplied by the insulator manufacturer in their construction specifications. This will standardize and regulate electric field at the energized end and avoid exposing these insulators to a phenomenon not visible or detectable to the human eye. It is also recommended that, during the assembly stage, the construction inspector verify proper installation of each and every corona ring and that a line not be energized until full installation of these elements has been completed.

4. Another recommendation for power companies is to include in their specifications for polymeric insulators a vibration test for sets of fittings, insulators and corona rings, both for suspension and dead-end tower arrangements. This would apply to those lines with average span length higher than 300 m and especially if there are two or more conductors per phase. Such testing will help ensure that corona rings do not become loosened as a result of conductor vibration or because they have not been properly installed.