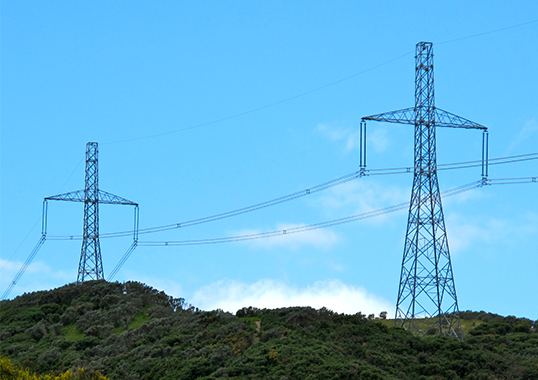 Transpower, the TSO in New Zealand first used pollution index measurements during uprating of its HVDC transmission system. The country’s only HVDC system was originally installed in 1965, rated ±250 kV, 600 MW, and pollution flashover performance has generally been satisfactory over its first 24 years of operation, both in inland and coastal sections.

This HVDC link was subsequently uprated at two stages. First, it was uprated to +250/-350 kV, 1240 MW by reconfiguring the valve groups, installing new 350 kV valve groups and reinsulating the line for 350 kV. In 1989, the insulation requirements for 350 kV equipment were considered and a program was initiated to collect pollution data at various locations along the line and at the cable terminals. This program measured ESDD on energized transmission insulators at 8 line locations.

Pollution flashover tests were then carried out on the type of insulators used on the 250 kV line (i.e. NGK CA808 porcelain) as well as on the later more modern design (NGK CA745-EJ porcelain fog type) to establish relative performance. These tests were carried out at two ESDD levels, corresponding to the inland and coastal areas. For the inland section, 14 new insulators at 350 kV did not fully equal the performance of 12 of the old insulators at 250 kV. Also, a line overvoltage study showed that 14 insulators would not meet the design criteria for switching surge withstand performance. Hence, 15 insulators were used in that section. 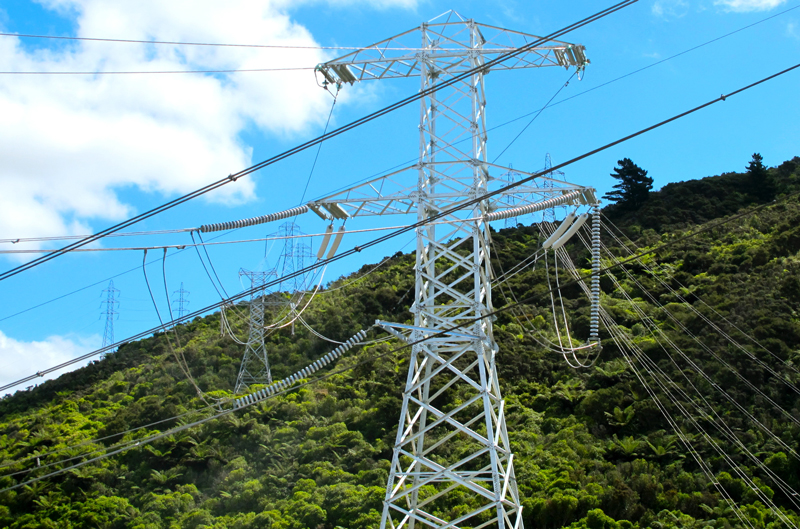 The line was re-insulated using porcelain insulators with a creepage distance of 54 mm per disc and a disc spacing of 170 mm, resulting in a creepage to string length ratio of 3.2. Coastal areas, having an ESDD level of 0.12 mg/cm2 required insulator strings consisting of 33 discs while inland sections, with ESDD level of 0.01mg/cm2, required strings of 15 discs.

Currently, Transpower has replaced many of these original porcelain insulators with glass. Also, during the past years, silicone composite and silicone-coated glass insulators have been considered to improve pollution performance in coastal areas after an unsuccessful experience with EPDM material. For example, the EPDM insulators installed on Transpower’s HVDC line demonstrated minor erosion at the interface with the cold-end fittings, shed punctures along the insulator length and significant cracks on the core rod housing close to the end fittings.

IEC 60815-4 presents a simplified method for determining the USCD required of DC insulators based on CIGRE TB 518 Guidelines. According to this standard, the most accurate way to obtain information on site severity is to obtain data directly from the operational experience of DC lines. ESDD values measured on energized porcelain insulators must then be corrected to determine site pollution severity if the candidate insulator differs from the reference insulator. Therefore, Transpower currently uses the IEC correction guideline to determine the USCDdc for HTM and non-HTM insulators other than the porcelain insulators used for ESDD measurements.

Table 1 summarizes the measured ESDD values and the reference DC site severity that has been calculated, as follows:

The reference dc UCSD (RUSCDdc) is determined and corrected for candidate glass (non-HTM) and silicone composite (HTM) insulators to obtain the required USCD for each candidate. The empirical equation correlating the reference creepage distance to pollution severity given in IEC 60815-4 is in the form of the following equation:

Where B and α are empirical constants that differ for each insulator type and γ is the pollution severity expressed in terms of ESDD for type A pollution and site equivalent salinity, SES, for type B pollution.

Since the transmission line structures had not been fully modified for the uprated system voltage (except for 24 structures), such long insulators could not be fitted into the top geometry of the existing lattice towers without violating required electrical clearances. Currently, both glass insulator strings (33 units of 170 mm spacing) and composite insulators (NGK with 22664 mm creepage distance and 5.6 m length) are installed on different sections of the transmission line. The pollution performance of the silicone composite insulators has been satisfactory. Nevertheless, the long-term performance of these insulators has had to be monitored.

The other challenge was the high corrosivity index along the line’s route, which required a zinc collar at the end fitting of composite insulators. The poor pollution performance of previous insulators (mainly porcelain and EPDM) in coastal regions combined with difficulties associated with fitting a long glass insulator string into existing tower top geometry and uncertainties regarding pollution performance of installed silicone composite insulators all led to the decision to monitor pollution performance of insulators installed. From May 2002 to June 2003, Transpower carried out a 12-month program at 15 AC substation sites to assess the prevailing environmental factors at each. These tests included monthly dust deposition measurements as well as actual monthly, 3, 6, and 12 month equivalent salt deposit density measurements by measuring surface conductivity.

Attend the 2022 INMR WORLD CONGRESS in Berlin where Transmission Design Engineer, Kamran Rezaei of Transpower, will review service experience with different insulator designs on New Zealand’s HVDC transmission system. He will also explain how monitoring leakage current on coated glass insulators has allowed assessing whether hydrophobicity can allow reduced creepage distance of strings by correlating data from field studies with the approach of IEC 60815-4. 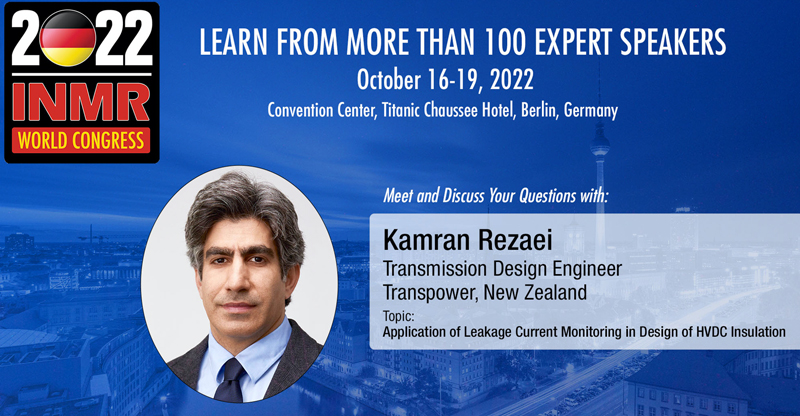