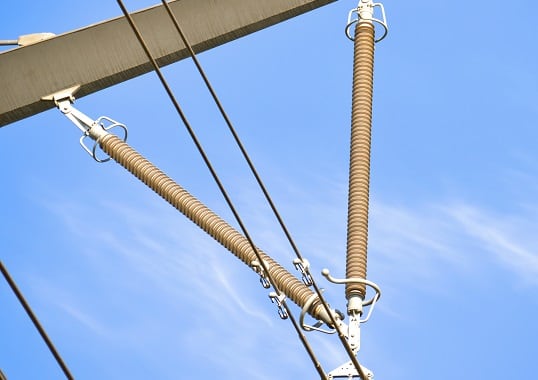 The 2nd edition of IEC 62217/1 was published in September 2012. Also named ‘common clauses’, this Standard defines tests and pass-criteria for evaluating designs or prototypes of long rod, post and hollow core insulators. Type, sample and routine tests are also described in the product standards applicable to these different insulator applications.

During product qualification at the design stage, boiling and dye penetration tests are applied in much the same manner used during the failure analysis referred to above. In the new edition of the standard, however, the dye solution is better defined as a 1% by weight solution of Astrazon BR 200 and methanol, because round robin tests have proven that testing with this can be more stringent than using the old formula with Fuchsine (also a possible carcinogen). However, at the sample and routine test stages, the test philosophy is more focused on functional properties such as mechanical forces, galvanizing thickness, etc. In IEC 61109, a dye test is performed on only one insulator to confirm the quality of sealing at both ends. Root causes of problems, however, cannot be identified using these tests.

IEC 62217 as well as the applicable IEC product standards go back to a document ‘Technical basis for minimal requirement for composite insulators, first published by CIGRE WG 22.10 in 1988. The 1st edition of IEC 61109 was derived from this and all forthcoming standards were developed giving consideration to the service experience of insulator designs qualified by these two documents. At the time of this 1st Edition, however, composite insulators were still a new technology and the materials and designs used were relatively diverse. As such, it was not practical to define further tests that could, e.g. be used as sample or routine tests to inspect interfaces. In this regard, it’s important to keep in mind that any standard attempts to somehow define a minimum of agreed conventions; it cannot go into specific requirements, which are really the manufacturer’s responsibility as part of quality assurance.

A composite insulator is manufactured from three components: the rod, a polymeric housing (now mainly silicone rubber) and end fittings. Yet different, manufacturer-specific production processes are applied to these, such as crimping on end fittings as well as vulcanizing the housing, including its bonding to the rod. Notwithstanding typical manufacturing tolerances in these three main components, the end result must always be a product capable of carrying tons of metal for 30 years or more. This challenge requires competence not only in properly defining the insulator’s needs (e.g. SML, creepage distance, field stress, etc.) but also strict compliance of its materials, properties and production processes – exactly as used during qualification at the design test stage. For example, adhesion between housing and rod (Figs. 1 to 3) as well as between housing and end fitting (when over-moulding as per Fig. 4) can easily be inspected on a regular basis, such as whenever there are batch changes of rods, end fittings or housing material.

An example of interfacial weakness that results from a manufacturing problem and that can be identified when insulators are visually inspected is shown in Figs. 5-7. Often, the appearance of the housing can be a good indicator of the quality of injection or extrusion. If superficial voids are present (as in Fig. 5), it may be an indicator of loss of pressure, too little injected material or a poorly-clamped and loose mould. This may well lead to a situation where the interface between end fitting and housing or between rod and housing is insufficiently bonded (see Fig. 6). In the case of this particular inspection, no boiling test was needed to detect the weak bond since the housing was easily removable. Strict process control is critical during over-moulding. If done improperly, voids can form inside the housing and trigger interfacial damage. It’s also worth mentioning that such a faulty design would likely fail the design test (boiling, followed by steep-front-voltage test).

Existing standards would seem to provide sufficient criteria to approve the reliability of an insulator design. But quality of raw materials and supervision of production is clearly the responsibility of the supplier and determined by the sophistication of the steps in their manufacturing process.