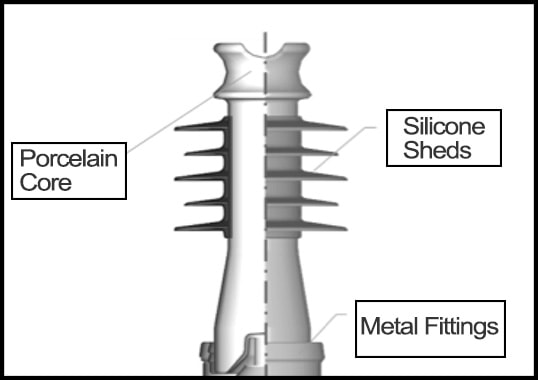 The need to avoid blackouts and grid shutdown due to frequent maintenance and washing – especially in industrial, desert and coastal zones – has led industry to look for new insulator solutions. While the majority of insulators currently in service worldwide are porcelain, application of polymeric/composite insulators has increased rapidly. The hybrid class of insulator combines both technologies in a single unit that offers the high mechanical strength, stability and longevity of a porcelain core with the excellent pollution performance of a silicone housing.

This edited article contributed to INMR by Eduardo R. Hilsdorf of PPC Insulators – Isoladores Santana in Brazil and Guilherme Cunha da Silva of Lactec Institute of Technology for Development reviews 15 years of manufacturing as well as related field experience with hybrid insulators on distribution lines.

Vandalism during the 1970s on railway insulators in the United Kingdom led to research into plastic insulators to replace porcelain. Pultruded epoxy glass fibreglass rods had already been developed for the high voltage switchgear industry and this same rod was used in development of 25 kV catenary insulators. At the time, these rods were available only up to 25 mm diameter whereas structural porcelain insulators typically had 70 mm core diameters and post insulators up to 80 mm diameters. It was therefore proposed to make polymeric-housed insulators using cylindrical porcelain cores of the same diameter and with the same end fittings as existing porcelain insulators. This would ensure that replacements were identical in mechanical performance to existing porcelain insulators. With this, the hybrid insulator came into existence, i.e. a combination of the mechanical strength of porcelain and the hydrophobicity and impact resistance of a polymeric housing.

The core of a hybrid insulator is the internal insulating part and consists of porcelain or glass insulator designed to ensure mechanical characteristics. The housing is the external insulating part, made of a polymeric material providing the necessary creepage distance and protecting the core from the environment. The end fitting device is the integral component or formed part of an insulator intended to connect it to a supporting structure, conductor, an item of equipment or another insulator. Yet in spite of these basic common characteristics, as defined within IEC 62896, the materials and construction details offered by different manufacturers vary considerably. For example, the core can be of porcelain or glass and there are even products that use a composite insulator fiberglass core but with a porcelain head – a design which incorporates the weakness of original composite insulator designs.

Hybrid insulators these days are being used across a range of applications, from overhead lines to posts to hollow core equipment insulators. When it comes to design testing, IEC 62217 is applied for the polymeric housing as well as for the interfaces between core and housing. For the core itself, IEC 60168, 60383 and 62155 test standards are applied for the respective ceramic material. Some tests have been grouped as design tests, i.e. performed only once on insulators satisfying the same design conditions. The common clauses defined in IEC 62217 are applied for all design tests for hybrid insulators.

Changes to electrical and mechanical properties of the components (i.e. core material, housing, interfaces, etc.) and of the complete hybrid insulator itself over time has also been considered in design tests to ensure satisfactory lifetime under normal stress conditions. Polymeric housing materials that offer the hydrophobicity transfer mechanism (HTM) are preferred for hybrid insulators, particularly where these are applied as a countermeasure in severely polluted service areas. For the time being, while no ageing or pollution tests have yet been developed to verify this property, CIGRE Technical Brochure No. 442 is available for evaluating retention of hydrophobicity and the HTM of polymeric housing materials.

The core is made by a simple extrusion process and this yields a low weight mechanical part with consistent mechanical properties as in any porcelain with sheds. The polymeric housing offers protection to this core as well as greater resistance to impact damage than the sheds in a conventional porcelain insulator. The hybrid insulator is typically half to one-quarter the weight of a conventional porcelain. This reduces transport costs, risk of damage during transport and installation and easier installation. Moreover, the polymeric housing normally allows for thinner sheds and greater creepage distances with resulting improved long-term pollution flashover performance. In addition, the hydrophobicity of the polymeric housing offers excellent performance and self-cleaning in polluted environments. Finally, the polymeric housing protects the core from short circuit arc damage that can fracture conventional ceramic insulators.

Typically, most dry band arcing and related damage on composite insulators occurs nearest to end fittings. By leaving an exposed band of glazed porcelain at this point along a hybrid insulator, partial discharges occur over the glazed porcelain and not on the more vulnerable polymeric housing. Also, the core material is not susceptible to moisture ingress problems and, if the housing is damaged, the porcelain core remains unaffected by moisture.

Hybrid insulators can easily be made as replacement parts for conventional porcelain posts used at substations, switchgear and overhead lines. Moreover, manufacturing processes are easier to control compared to crimping end fittings onto epoxy fibreglass core rods, as done for composite insulators. Hybrid post insulators can even include the same lipped and grooved ends to accept OHL conductors as used on conventional line posts.

Selecting the appropriate housing material is important to guarantee good field performance in a hybrid insulator. In this regard, long-term stability in resistance to UV weathering, retention of hydrophobicity and resistance to tracking and erosion must all be considered. Another key issue is forming an electrically stable interfacial seal between the housing and the glazed ceramic core. This is normally done either with a suitable material, e.g. an RTV silicone material, or moulding the housing in place using appropriate coupling agents, as done with resin glass cores. Manufacturing experience suggests that the best option is using a high temperature vulcanizing (HTV) silicone moulded directly onto the porcelain surface under high pressure. The silicone housing is then fully bonded onto the solid porcelain core, with ideal management of the critical triple point, where fitting meets silicone housing meets porcelain core. Due to the high pressure involved in this operation, the silicone housing adheres directly onto the fitting or to the porcelain without need for additional sealing.

Brazil has a densely populated coastline of approximately 8000 km and this polluted marine environment has caused serious insulation problems for many distribution utilities. Hybrid insulators have been applied in these harsh coastal areas with favourable results that include less need for maintenance and washing, fewer service interruptions and reduced operating costs. Hybrid insulators have been successfully tested in other countries as well across a variety of polluted conditions. In the desert areas of Chile, for example, thousands of pin type porcelain insulators with large protected creepage distance were replaced with hybrid insulators that have performed well.

Field tests of hybrid insulators were conducted in Brazil involving Neoenergia Group, a utility located in the Northeast, in co-operation with Lactec, an R&D Institute. A pilot network running 15 m and composed of four spaced poles was set-up in the area near Pituba Substation, located about 500 m from the seacoast in Bahia State. Cables, insulators and crossarms were installed on these poles and two lines were assembled in parallel, using these poles: a single-phase line operating at 34.5 kV and another single-phase line operating at 13.8 kV.

Fig. 5 illustrates typical problems caused by leakage current due to the impact of salt pollution on insulators. Cross-arms are usually permanently damaged and insulators become loose, causing loss of electrical contact and interruption of service, sometimes also burning the cross-arms.

Among the first observations from this pilot network research was the difference in hydrophobicity and wet band area of the two different insulator technologies, as seen in Fig. 6. On the hybrid polymeric sheds, there are distinct, unconnected drops, indicating a hydrophobic surface. However, a continuous wet band was detected on the porcelain insulator, indicating a hydrophilic surface.

After 1.5 years of testing, data on leakage current versus time shows better performance by the hybrid insulator than the anti-fog design porcelain insulator of equal leakage distance (see Fig. 7).

Based on years of experience and 125,000 hybrid insulators utilized in polluted environments including across coastal areas and deserts in Brazil, Chile, Peru, the Philippines and New Zealand, application experience has proven uniformly positive. In Northeast Brazil, for example, the local utility used to wash their grid at least twice a year. Installation of hybrid insulators has eliminated this need. Service records show that these insulators have been operating in the severe coastal environment at 15 kV, 25 kV and 35 kV for over ten years, while still maintaining reasonable hydrophobicity and with no need to consider replacement. Similarly, in the Chilean desert, a local utility used to rely on fog type pin type insulators with large protected creepage distance (see Fig. 8) but still experienced problems from leakage current due to deposition of conductive sand along internal shed surfaces. To combat this, more than 50,000 hybrid insulators were installed with positive results. Morep0-oover, here too the hybrid insulators have been in service for more than 10 years with reasonable retention of hydrophobicity and no need for replacement.

Hybrid insulators are among the most important recent innovations for LV and MV overhead lines and substations. Despite the seeming simplicity of a solution that combines a porcelain core with a polymeric housing, successful design in this case requires quality materials. The housing should be a long-life hydrophobic component that, according to best practice and field experience, should utilize HTV silicone designed with specific fillers to protect the silicone from erosion. These fillers, typically alumina trihydrate (ATH), must be incorporated into the polymer in specific minimum quantities to be effective. The core should be a continuous and single piece porcelain made of high-strength alumina oxide (C130 mass according to IEC 60672). This ensures avoiding risk of ageing of housing from erosion while also taking full advantage of the high mechanical strength, unique stability and long-term performance of this material. Hybrid insulators combine the known advantages of a porcelain core with the excellent performance of a silicone housing and offer an ideal solution for distribution systems operating in highly contaminated conditions.