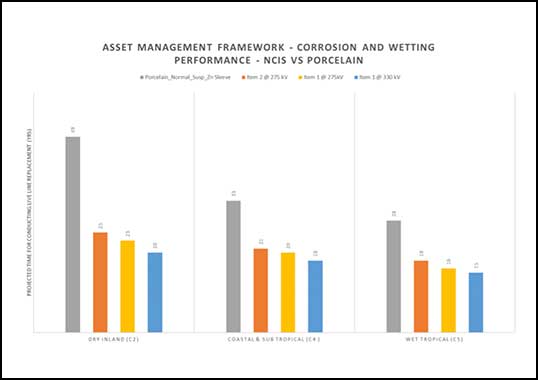 Powerlink Queensland is a government owned network service provider that builds and operates the extensive transmission network in Queensland, Australia. Approximately 30,000 non-ceramic insulators (NCIs) are installed on this system that operates at 110 kV, 132 kV, 275 kV and 330 kV. This edited contribution to INMR by J.A. (Tony) Gillespie of Gillespie Power Consultancy and Glenn Stapleton, Principal Transmission Engineer at Powerlink, reviews experience with NCIs over more than two decades and across the entire life cycle. This Part 2 of the Article offers a case history of how Powerlink has applied its NCI condition monitoring and replacement prioritization strategy. It also presents key conclusions arising from two decades of experience with composite insulators on its transmission system.

A demonstration of application of the assessment framework described earlier was undertaken for several as-installed insulator populations in the Powerlink network. This case study demonstrates the assessment process for a sub-population of two products, each one supplied by a different supplier. These products are generically classified and defined as: 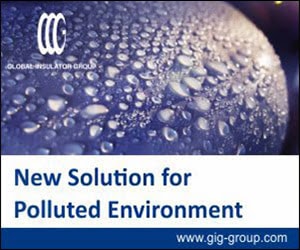 Table 1 below outlines technical and design details, ratings and the size of the installed population that requires a decision on replacement sequence and timing. Note that the insulator population being considered in this case study are only installed in suspension “I” string positions. The strain configuration insulator population is evaluated separately. The Table shows that Catalogue Item 1 is installed on two separate assets, both located in dry inland environments and each energized at different voltages. This allows sensitivity of voltage stress for assets in similar environmental conditions to be demonstrated. Catalogue Item 2 is installed in a region of greater rainfall for an asset that is located closer but not directly on the seacoast.

The insulators in this case study are essentially equivalent in age, i.e. 19 and 20 years in service, with Supplier B being the older.

In terms of failure history, there have been no recorded failures for Catalogue Item 2 from Supplier B. One recent failure occurred for Supplier A, but this involved a different catalogue item with shorter creepage and arcing distance versus Catalogue Item 1 from that supplier, as shown in Table 1. The failure occurred in a 275 kV application after the unit had been in service for about 22 years and was attributed to incorrect installation/positioning of the corona ring. Climate in the area where the failure occurred saw localized higher rainfall and longer duration of wetting. In fact, wetting duration for the recorded failure was well in excess of the assumptions made in Table 1 for Catalogue Item 1 from Supplier A. E-field modelling was performed and maximum electric field stresses on NCIs equipped with grading rings fitted were as follows:

• Catalogue Item 1, 330 kV line voltage, lattice steel structure has a calculated electric field of 0.3 to 0.35 kV/mm on the sheath;

• Catalogue Item 1, 275 kV line voltage and on a tighter phase spaced lattice steel structure has a calculated electric field of 0.10 to 0.30 kV/mm on the sheath;

Contamination affecting the insulators from Suppliers A and B are predominately dust generated from the inland location of the line as well as agriculture in some sections. No known pollution flashovers had been recorded for these assets during their circa 20 years of operation. Outages have occurred due to lightning, with ground flash densities in some localized storm asset corridors and regions in the range of 3 to 4 strikes/km2/yr. Recorded lightning outage rates per circuit used in the sensitivity study are summarized in Table 3.

Table 4 summarizes the PIPA generated times to degradation onset and respective degradation modes, by supplier, along with the relative probability of encountering these conditions. The desktop study suggests an additional 5-year window may exist before onset of degradation for Catalogue Item 1 when the unit is operating at lower voltage stresses from 275 kV and in dry inland environments. It also suggested that potentially more degradation modes could become apparent during inspection of Catalogue Item 2 from Supplier B.

Visual inspections were undertaken on samples recovered from the field to assess condition, with special focus on the triple seal and also on sheds located in the high E-field zone. Hydrophobicity tests were also conducted. Visual condition and hydrophobicity class comparisons were then made to sample photos available from the EPRI ageing chamber reporting tool. Degradation noted on these recovered samples as well as from photos taken during the latest climbing patrols of random structures were reviewed for signs of onset of advanced degradation. Anticipated degradation conditions of note, on a supplier basis, are highlighted in the Projected Condition(s) column of Table 3.

Degradation had not significantly exceeded conditions evident on artificially aged units from the same supplier compared using EPRI’s ACRT tool. Performance of Catalogue Item 2 from Supplier B, based on all available inspection data, indicates that in-service condition of these units is better than degradation estimates based on desktop study tools. A sensitivity analysis of key wetting duration and electric field stress parameters would help calibrate actual performance versus revised assumptions for time to degradation.

Visual inspection of Item 1, recovered from 330 kV applications, indicated some weakening of the shed material, but no tearing or erosion was evident in-service. A corona scan from helicopter was also performed for Supplier A insulators, in both 275 and 330 kV service locations, for the population outlined in Table 2.

EHV testing was also performed, as summarized in Table 2. No discernible pattern was noted for Catalogue Items 1 and 2 that would indicate that resistive leakage current worsened when comparing readings taken before and after impulse tests on the complete insulators. Moreover, no discernible pattern was noted when comparing leakage current data on new and old units of the same catalogue item. In retrospect, the merits of conducting power frequency leakage tests are questionable and this might be due to the reasonably good integrity of the insulators recovered for the purpose of testing. Dry leakage current testing may prove more applicable to units that have undergone advanced deterioration, but may be just as apparent as results from simple visual inspection. The merits of future EHV sampling tests using dry leakage current measurements will therefore be reviewed and investigated further on a larger set of recovered insulators that show more deteriorated conditions and are no longer in-service due to age. Extending the power frequency test to include a wet test may also be considered to establish whether this will better quantity the effect of loss of hydrophobicity.

Steep front impulse testing did not identify or accelerate any degradation mode. This was noted both when testing complete units and testing pre-conditioned cut and boiled units. But these tests did provide valuable information on initial concerns for risk of internal voids and poor adherence of sheath to rod. Such failure modes were initially identified in the population assessment tools as applicable with finite probability for certain units of particular vintage and manufacturing/formulation parameters. Performing an e-field scan of the insulator before and after steep front impulse testing also provided a means to determine the extent of any internal deterioration from such testing, which proved of insufficient severity to cause flashover.

Table 3 summarizes typical time to failure estimates. These appear to provide lifetime estimates for some units in excess of 25 years in certain environments. But in reality, the fleet management approach adopted by Powerlink seeks to balance financial impact, labour resources and focus on minimizing risk of not being able to perform timely replacement as needed. This usually results on actual replacement scheduled earlier than this. Of course, should future replacement be possible without maintaining focus on this being conducted live, there is scope to extend the replacement cycle past 25 years in the case of some insulator suppliers.

Fig. 1 highlights Powerlink’s existing approach to management and scheduling for live line replacement for Catalogue Items 1 and 2. This is presented in terms of the classifications for NCI wetting performance as well as corrosion region used to classify environment for cap & pin insulators and galvanized hardware supporting insulator strings. Corrosion regions in Queensland are classified from C1 (minimal) to C5 (extreme) risk. It should also be noted that ideal replacement intervals for insulators depends as well on replacement and refurbishment intervals for towers and components. In this regard, insulator replacement needs to align with scheduled intervals for replacing steelwork and other line hardware.

Non-ceramic insulators (NCIs) have been successfully applied on the Powerlink Queensland transmission system. Powerlink continues to purchase and install composite insulators but now with reduced rollout frequency given more restricted deployment criteria. Most existing line assets equipped with large populations of NCIs are scheduled to be re-insulated with the latest generation of this same technology – but mainly where risk of bird chewing damage is seen as low and where the service environment maximizes life expectancy of these replacement units.

The key requirement of being able to undertake the majority of replacement work live presents a challenge when using a fleet management approach. Timing replacement must take account of projected insulator condition while also maintaining an acceptable risk profile for live line working as well as compliance associated with risk of dropped conductor. Moreover, finite human resources to undertake replacement work limit the total number of strings that can realistically be changed in any year. The ‘step change’ in NCI penetration into the Powerlink network that peaked in the early 2000s has resulted in large numbers of NCIs together now approaching theoretical projected end-of-life.

Population assessment approaches and tools have aided Powerlink to develop a priority and solid engineering basis for planning and undertaking an NCI replacement program. To support the fleet management approach, desktop models, health indices, end of life assessment and replacement prioritization are all being performed using population assessment tools developed by EPRI. Successful application of this approach has been demonstrated with a case study for three sub-populations of NCIs currently installed on the transmission network and now being planned and prioritized for replacement.