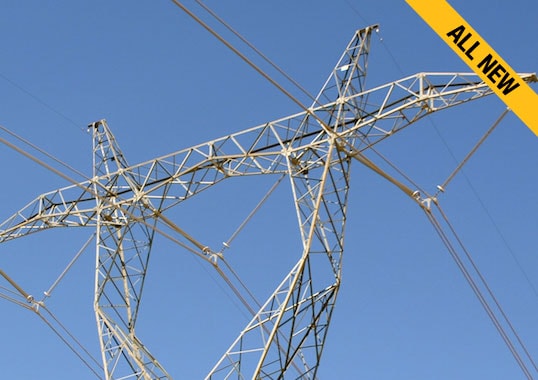 The continued growth of polymeric insulators is being driven by their many advantages. However, with this growth at both distribution and transmission voltages, the challenges of protecting the grid and maintaining system reliability depend on their proper inspection and testing. Moreover, as system voltages as well as criticality of lines increase, it becomes imperative to understand the performance of all key line components, especially insulators.
At the same time, with growing acceptance of polymeric insulators, more manufacturers are entering the business. However, there must be a conservation of past practices and processes to keep the grid safe and reliable as the power utility industry assumes a global perspective when it comes to sourcing and procurement of line components.
This article, based on a contribution by Jeff Butler of Hubbell Power Systems at the recent 2015 INMR WORLD CONGRESS in Munich, Germany discusses newly introduced insulator inspection equipment for transmission line operators. The goal of this device is to help utilities maintain their lines and protect their linemen who work on transmission lines equipped with polymeric insulators.

In the early 1960s, as the efficiency of performing live-line bare hand work was being realized, technology had not yet developed a trustworthy way to confirm the integrity of the ceramic insulating bells. Beyond crude methods of visual inspection or impact tests, it was only years later that the first ceramic bell testers were implemented. Since then, it is generally accepted as an essential requirement for ensuring worker safety to confirm the electrical integrity of the installed insulators prior to performing bare hand work on energized lines. Due to modular design of the string, the practice of using a tester on each ceramic bell came to be employed. If that process determined that there were a necessary number of good bells, the linemen could safely proceed with work. By contrast, the advantage of a single piece design has proven an obstacle in using an equivalent modular test approach for polymeric insulators. Moreover, with the extended length of insulator strings with increasing EHV and even UHV applications, it became impossible to determine the status of polymeric insulators using the same type of inspection methods traditionally used for ceramic insulators.

In 2003, the Electric Power Research Institute (EPRI) initiated a project to develop a tester to assess the electrical integrity of polymeric insulators. Among the goals was developing a unit that was lightweight, reliable and could detect defects under either energized or de-energized conditions. Based on a lightweight power supply, a test instrument was developed that uses an algorithm comparing the responding resonant frequency of an emitted signal to defined parameters representing a known sound polymeric insulator.

As the tester samples a defined length of an insulator, if the resonant frequency or signal frequency is outside defined parameters, that section of insulator is determined to have low electrical integrity. On the other hand, if the resonant frequency and signal are within the parameters, then this section of insulator has the required electrical integrity. Using this methodology, both internal and external defects have been found. Basically, the new tester functions like the ceramic bell tester as each unit or section must be tested to determine the status of the whole insulator. The tester is also able to test a de-energized insulator, which offers the advantage of being able to test insulators prior to installation or after removal from the line.

The EPRI designed tester has been able to provide a polymeric insulator test method that is similar to that employed on ceramic bells with the added benefit of being able to test even under de-energized conditions.

The proper use of the equipment sees the operator use a ‘hotstick mount’ to attach it to an insulated universal pole (hotstick) of adequate length to maintain proper safe working clearance from all potentially energized parts of the system. If testing a de-energized insualtor, the use of the short insulated handle provided with the unit is recommended. The ‘Probe Spacing Adjust’ is used to achieve the proper fit of the ‘V Probes’ between the insulator sheds and the unit is then turned on and set into the calibration mode, selected by depressing either of the ‘V Probes’ during the initial boot-up process. The unit is in calibration mode as indicated by a steady green light and a flashing white light and is calibrated by using either a known good section of the insulator or using the calibration insulator sections provided with the tester.

The tester is seated on the section of insulator to be used for calibration by fully depressing both ‘V Probes’ simultaneously against the insulator, as shown in Fig. 3. Blue lights will illuminate at either end of the tester indicating that the probes have been fully engaged.

Calibration is done automatically when the probes are properly engaged for about 1 second. During the sampling process, the tester generates a high frequency, high voltage signal (1.5 kV, 1.5 MHz) using the resonant power supply. In calibration mode, the data collected from the generated signal is used to establish parameters that will function as the baseline for comparison during the testing mode. Proper calibration has been performed with the indication of the solid white LED and a long beep and the unit must be powered off in order to store the calibration data to memory.

Once the unit is turned back on and allowed to complete its boot-up process, a solid white light indicates that it is ready to begin testing the insulator in question. It is recommended that the unit be re-calibrated based on the following situations: at least once per day prior to use; if the probe spacing has changed; if a different insulator type is being inspected; or if the ambient temperature has changed more than 18°F (10°C).

Similar to the steps performed in the calibration process, during the testing process, the tester is to be positioned properly on the section to be tested with V probes fully depressed. The proper test procedure would have the operator start at the line end of the insulator with the bonding probe in contact with the corona ring or metal end fitting (as shown in Fig. 4) and then repeating the test sampling procedure in overlapping test sections by at least 1” (25.4 mm) until the entire insulator has been tested.

As the operator approaches the grounded end fitting, the unit would be inverted so the bonding probe makes proper contact with the metal end fitting or corona ring now on the ground or tower end of the insulator. Blue lights will illuminate at either end inline with the V probes indicating that the probes have been successfully engaged. Once the blue lights illuminate indicating that the V probes are fully depressed, the test measurement is taken automatically and will be indicated by the illumination of the amber LED. The probes must not be removed during this time as an invalid measurement will result.

An amber LED and warning tone indicate that an improper measurement was taken and the test process needs to be repeated for that section. If the section of insulator is determined to have low electrical integrity, then the tester will indicate this with a red light and a buzzer sound. The indication for a section of insulator with proper electrical integrity is a green LED and steady beeps. In either case, once the unit determines the result of pass or fail, feedback is immediately provided with distinct visual and audio indications. Test data can also be captured on a Wi-Fi connected device for further analysis. Once the V probes are disengaged from the insulator, the unit stops reporting results of the section tested and is ready to test the next section.

One example, shown in Fig. 5, is the output of data to a Wi-Fi connected laptop computer. Once this data is output to the device, it can be exported to a program such as Microsoft Excel for further manipulation. Note the additional information captured by the unit such as temperature and a time stamp. With the insulator tester’s ability to collect all this measured data, it will be interesting to see how it will be employed by utilities. For example, possibilities range from the ability to track trends for a single polymeric insulator or entire line over its lifespan to better understanding the service life and behavior of insulators under certain electrical, mechanical and environmental conditions.

In the data from Fig. 5, the 6th record shows a measurement found outside acceptable parameters and this is indicated by the red coloring and “FAIL” result. In addition to the immediate feedback from the unit in the field during the test, this additional data tracks the Pass/Fail result for further analysis. Care must be taken if multiple sections of an energized insulator are indicated as failed sections during testing. Although not standard practice across all utilities, similar test procedures for ceramic insulator string testing instruct the user to discontinue testing if 33% of the tests have failed. As the number of failed units or sections increases, there is heightened risk of flashover if testing continues. It is recommended to follow the procedures as outlined by the utility for the determination of unsafe working conditions or the determination of failure of the entire insulator based on information from the polymeric insulator tester.

September 14, 2019 Comments Off on Testing Ageing of Porcelain Insulators