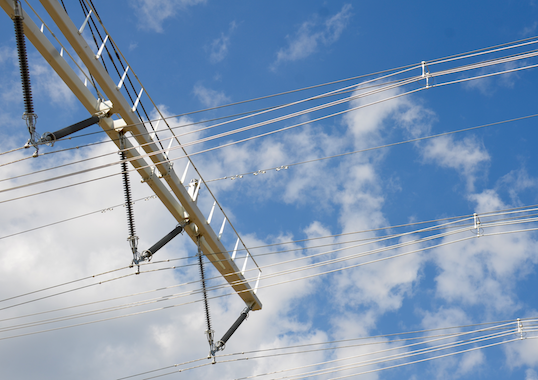 The advent of composite insulators began during the 1950s, first in the U.S. and soon after in Germany and France. User acceptance was slow at the start and these products went through the ‘teething’ problems common to most technological innovations. Moreover, their initial pricing made them far too costly for widespread application. But all this changed during the past two decades. Today, these insulators account for about half of the total world market. Production volumes have soared and, with this, acquisition costs are now often below those of porcelain and glass counterparts.

One of earliest applications for composite insulators was as insulating cross-arms, which are indispensable for design of compact lines and so-called aesthetic towers. The former, in particular, are rapidly gaining ground as an alternative to building traditional lines due to higher public acceptance. Moreover, composite insulators play a growing role in cases of line uprating to increase power transfer capacity of existing lines. Konstantin O. Papailiou, former Chairman of CIGRE’s Study Committee on Overhead Lines and longtime executive in the insulator industry, explains the necessary properties of composite insulators as well as recent examples of such applications.

Compact lines were first developed in the 1970s but only started to become popular during the late 1990s due to rapid growth in the availability of composite insulators. Insulated cross-arms, which are indispensable for installation of a compact line, are loaded primarily by compression, which means that they are subjected to relatively large deformations. These deformations can better be sustained by composite materials than by conventional porcelain and glass insulators. Specifically, the following key properties of composite insulators are advantageous for application in insulated cross-arms: high bending strength; elastic limit in the region of ultimate strength; high ultimate strain; and non-brittle behavior

Fig. 5 shows the loads that act on an insulated cross-arm. These are:

• vertical loads, V, from the conductor and from ice, if present;
• horizontal loads, H, from wind and, in the case of light-angle supports, from angular pull; and
• longitudinal loads, T, possibly from non-uniform conductor tension in adjacent spans or from a conductor failure – a rare exceptional load.

The vertical loads are taken up largely by the brace, depending on the angle, a, between the brace and post. By contrast, horizontal loads acting in compression, load the post in buckling. The insulator forces, i.e. the compression force, P, on the post and tensile force, B, on the brace are calculated, assuming T = 0, using the following formulas:

This is the most commonly used arrangement, particularly for higher voltages, since it has a high level of mechanical strength and is also fault-tolerant in case of transverse loads (see Fig. 8). The composite long rod in the brace is loaded purely in tension and can be easily dimensioned. By contrast, the post is loaded in compression and, since it is articulated at both ends, can be calculated as a Euler beam with maximum tolerable compression load, i.e. the Euler load:

If there are differences in horizontal line tensions in two adjacent spans, the tip of the cross-arm will move toward the higher tensile load. In this case, if angle of rotation of the insulated cross-arm is inclined to the vertical, the tip of the cross-arm is physically raised and vertical line loads generate restoring torque. This causes the equilibrium of forces in the line direction to be re-established. Therefore, the most important design parameter to avoid stability problems is an adequate inclination angle, q, of the cross-arm’s rotation axis (see Fig. 6). Values of about 20° have proven to offer a good compromise. These types of stability issues have been examined extensively. As mentioned, stability depends greatly on wind speed perpendicular to the line and improves with decreasing number of spans as well as with an increase in the inclination angle, q, of the cross-arm (see Fig. 11).

In general, wind stability of compact lines with insulated cross-arms can be improved using the following measures:

Because of increasing difficulty to secure approval for new transmission corridors, technologies for line uprating have been more and more developed. The basic goal is to use existing line corridors for transferring more power. One option is to use high temperature low sag (HTLS) conductors to increase current. Another is to modify tower top geometry in order to increase voltage. In both cases, composite insulators have offered interesting new opportunities.

The first 400 kV compact line was installed in Switzerland in 1998. The line became necessary since the existing 125 kV line (see Fig. 12 left) was not sufficient to carry increasing power demand in the region of Lake Geneva and had to be replaced with a 400 kV line. Conventional lattice towers normally used for this type of line would require considerable rightof- way, which was not available in a certain location close to buildings. The solution was to design slender 2D towers and apply insulated cross-arms with composite insulators for the 400 kV circuits. These could also support two single-phase 132 kV circuits for feeder lines of the Swiss railway (Fig. 12 right). It is worth noting that FRP core rods available at the time were restricted to 76 mm diameter, which could not take the compression loads. So, hollow core composite insulators had to be used.

Conversion from AC to DC offers advantages for long distance transmission. In particular, conductors can be utilized up to their thermal limit in DC whereas in AC surge impedance loading (SIL) often becomes the limiting factor. In a pioneer project in Germany, one of the two circuits of a 380 kV AC line has been converted to a ±400 kV DC bi-pole with the third conductor used for the metallic earth return (see Fig. 13). A major prerequisite for this project was to use the same conductors and same towers. This would only be possible by replacing existing porcelain strings with composite insulators since these have significantly better contamination performance under DC. As such, their length can be accommodated within existing tower top geometry.

An interesting project in Austria saw two-fold line uprating. On one side, the original ACSR conductors were replaced by newly designed expanded conductors, i.e. conductors with the same amount of aluminum but with larger diameter to increase current carrying capacity due to better cooling by radiation. On the other side, the metallic cross-arms on the lattice steel towers were replaced by insulating cross-arms (see Fig. 14), which enabled increasing line voltage from 245 kV to 420 kV.

February 23, 2019 Comments Off on Experience with Design & Erection of Insulated Cross-Arms