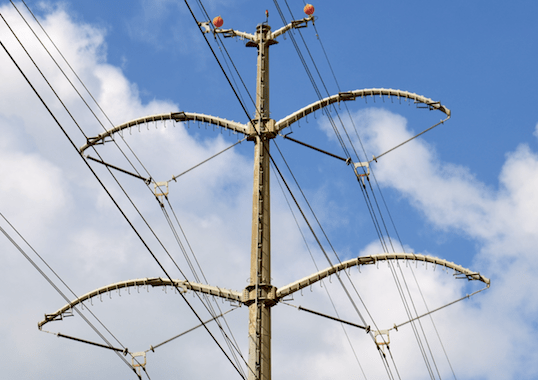 In an era when there is public scrutiny of any proposed new overhead lines, the concept of compact design has taken on growing importance. Coinciding with and supporting this has been the maturity of composite insulator technology and of composite line post insulators in particular. These insulators, with their unique combination of low weight and high strength, have contributed to the range of possibilities available to designers of compact lines. Among those countries where building compact transmission lines has received great interest since 2000 is Israel. Israel Electric (IE) has prioritized construction of compact lines and also reviewed the associated advantages and disadvantages identified. In addition, related issues such as electromagnetic fields were considered during decision-making.

During the first half of the 1990s, increasing demand for electric power in Israel required a rapid increase in power transfer capabilities of the country’s overhead network. New 161 kV and 400 kV lines had to be built and older ones either upgraded or partially refurbished. As typical of the developed world, obtaining permits for erecting new lines in Israel can be lengthy and difficult. Because of its small land area and dense population, this process has become more demanding than almost anywhere else. It was this combination of needs, constraints and opportunities (i.e. the emergence of composite insulator technology) that drove IE to begin looking at more selection and construction of compact line designs. The first compact towers in Israel were built only a few years after IE’s first application of composite insulators. However, because of the utility’s still limited experience with this insulator technology, it was decided that these compact towers should be equipped with ceramic insulators. One of the first design decisions taken by engineers in regard to compact lines was to use only vertical distribution of phases Subsequent design decisions included use of tubular poles instead of conventional lattice towers and use of V strings, horizontal and vertical, in place of I strings. A development promoting the trend toward more compact lines occurred when IE decided in the mid-1990s to use only silicone rubber (SR) composite insulators at all voltage levels on its network. It was also decided that, in the course of this changeover of technology, the same creepage length would be maintained as used in the past for porcelain. The decision to use only composite type insulators contributed to the compaction of lines because such insulators, not having intermediate metallic fittings, allow for the same creepage distance but with shorter insulator length. In 1997, IE recognized the superior pollution performance of SR insulators by adjusting previous specifications so that such insulators could have 25 percent shorter creepage than had been required for porcelain. The significance of these decisions in terms of their impact on reduction of the right-of-way corridor needed for lines could be seen from the dimensions of the towers.

For example, in the case of 161 kV lines, the change from tower 1 to tower 2 allowed for a reduction of 3 meters on each side. For 400 kV, the change from tower 2 to tower 5 brought with it a reduction of 6 meters on either side. These reductions take into consideration not only normal hanging position of conductors but also maximum swing arc due to lateral winds. Based on operating experience, IE’s Overhead Lines Dept. summarized their view of the advantages and disadvantages associated with compact line construction:
Major Advantages
Reduced corridors; reduced footprint of towers; possibility to increase the number of circuits installed per tower; reduced intensity of magnetic field outside right-of-way (RoW); reduced audible noise.
Major Disadvantages
Increased cost; poor lightning performance (i.e. shorter insulator strings mean decreased protection angle of a line).
When analyzing the economics of compaction for both 161 and 400 kV lines, two different levels of cost increase were identified. In the case of lattice towers equipped with compact strings, the cost versus the basic normal construction typically increased by about 20 per cent. However, when specifying tubular poles with compact strings, this cost premium was more like 50 percent. As a result and with consideration of all the above positives and negatives, the policy adopted at IE in 2006 for construction of compact lines was defined as: In urban areas, all new lines would now have compact design while in rural areas, new lines would continue to be built with conventional lattice towers. In addition, compact designs would be used whenever large amounts of energy had to be transferred along narrow corridors.

The assumption is that, by switching to compact line designs that can be built along narrower corridors, required RoW will diminish. However, in practice, IE continued to require from the Land Authority the same RoW for all new compact lines as traditionally established for standard line designs (i.e. 40 meters for 161 kV lines and 70 meters for 400 kV lines). The explanation for this was based on several considerations: IE had a number of lines that consisted of both compact and standard segments; there was an international trend to require ever lower values of the magnetic field along the borders of the RoW; and, doing so allowed for a reserve permitting adding more circuits on poles of the compact line at some future time. Because of this policy, any savings on land acquisition costs were obtained only in situations such as when several compact lines shared the same corridor or when more than two circuits were installed on the same tower.

The cost of tubular poles was one of the main impediments to further extending application of compact line designs. Given this, one solution proposed involved a structure consisting of tubular base and lattice body that offers a mix of the individual advantages of tubular and lattice towers, including: being half the cost of an entirely tubular pole; requiring a reduced footprint versus purely lattice towers; offering superior protection against vandalism. A second unique design concept was a ‘combined string’ that aimed to mix the features of suspension and tension strings. This string is comprised of tension insulators and the conductor is connected as on a tension tower. However, tension on insulators is not transferred to the tower arm but instead passes from one insulator to the other along the line.

Two main advantages obtained in this way were raising the conductors higher above construction sites or roads and the possibility to increase rating of the line since clearance of conductors is maintained even if temperature increases. Conductor temperature should normally not exceed 60° C but, with this special suspension configuration, it could increased to as high as 100° C without problems due to greater sag. Yet another technique identified to improve power transfer capabilities of lines at IE involved exchanging type of conductors from traditional ACSR (comprised of a steel core) to conductors made entirely of aluminum, e.g. AAAC type for transmission lines or AAC type for distribution lines. Use of ACSR conductor is justified mainly under conditions of ice accumulation, galloping or large spans – conditions not typical for the service environment in Israel. A change to these new types of conductors has been underway at IE and this changeover was expected to yield at least a 12 percent increase in power transfer capacity of lines.

Study of magnetic fields in overhead line design started at IE during the 1990s. Until then, calculations of electric and magnetic fields were performed mainly for substations where personnel might spend hours each day in proximity to energized apparatus. The need to deal with magnetic fields arising from MV, HV and EHV lines arose in Israel later once the public had become more aware of potential risks related to long-term exposure. As in other developed countries, the suspicion grew that being exposed to even low magnetic field could have adverse health effects. In this regard, IE increasingly had to confront complaints, court actions and special requests to supply test results to obtain approvals for new line corridors. Work related to measurement and calculation of magnetic fields around HV and EHV lines was done at IE’s Electrical R&D Laboratory. In order to characterize the magnetic field of a line, measurements were performed at one meter above ground along two axes perpendicular to the line, in the middle of the span and also under the tower. The internationally-accepted value for maximum permissible magnetic field in areas where people spend long intervals was 1000 mG – a value adopted by the Ministry of the Environment – and to which IE had to comply. In practice, however, values recorded along the borders of RoWs were much lower: e.g. in the case of maximum operational current along 161 kV lines built with standard towers, the magnetic field was found to be 18 mG while for lines built with compact towers this value was only 8.5 mG; along 400 kV lines, these respective values were found to be 30 mG and 18 mG. In order to comply with requirements for more reduced fields, special solutions have been developed, including: using V-strings on required spans in order to raise the conductors higher than normal and reduce field at ground level; phase transposition to offset magnetic field produced from one circuit by the field of the circuit installed on the other side of the tower; installing supplementary towers, again in order to raise the conductors to a higher elevation than normal. IE’s Electrical R&D Laboratory explained that such measurements in the field to supplement mathematical models and are useful to verify accuracy of these models and to detecti unknown sources of magnetic field in the area. Mathematical computations, by contrast, permit intensity of magnetic field to be evaluated for different values of current and at many different locations along the line. They are therefore indispensable at the design stage to obtain approval for construction of a new line.

November 23, 2019 Comments Off on Key Issues for Future of Composite Insulators