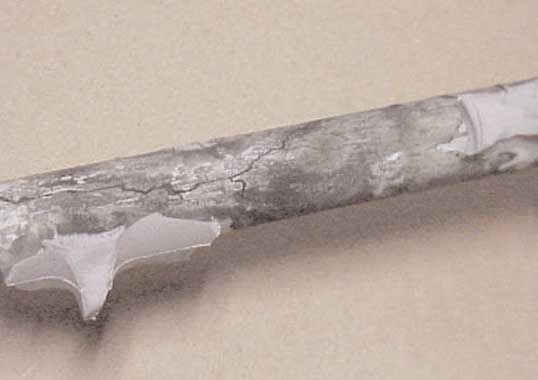 Among the remaining hurdles faced by composite insulator technology in gaining even broader acceptance by utilities worldwide is worker safety under circumstances that require changing them out under live line conditions. For example, years ago, a utility located in Ontario, Canada sponsored research to explore criteria for safe live line replacement of defective polymeric insulators. The specific incident that triggered the investigation arose during the upgrading of a circuit whose insulation was also being changed from ceramic to non-ceramic. As soon as the line was re-energized, a number of problems arose with the new silicone insulators causing almost immediate line trips. Faced with the need to change out the failed insulators and also to maintain reliability targets, the utility became concerned about the broader issue of worker safety when composite insulators must be replaced live line. With these considerations in mind, the utility funded research to investigate and better understand why such failures took place. More importantly, it also aimed to determine if there could be any relatively low-cost methodology to ensure complete safety when changing out composite insulators using live line techniques.

The problems that arose at the time the upgraded circuit was first energized were quickly traced to a specific batch of silicone rubber insulators judged to be defective. Fortunately, good quality control procedures by the utility allowed identifying exactly where on the line these suspect insulators had been stored or installed. This offered the possibility to selectively replace these damaged units without necessarily taking the upgraded line out of service once again for another large-scale change of insulation. To plan such a replacement program, however, it would first be necessary to establish criteria for safe live line work procedures under these circumstances. According to then Project Manager, Dr. William Chisholm, now a prominent consultant in the field, it was not immediately clear whether the failed insulators were already defective at the time they left the manufacturer or whether the defects arose as a direct result of handling in the field.

Initial inquiries quickly determined that the affected insulators had been exposed continuously to large amounts of water during storage to the point that the cardboard boxes in which they were stored had degraded to almost nothing. Similarly, the plastic bags in which each insulator was packaged were noticeably wet inside and water was beading on the surfaces of the affected insulators. Most utility personnel would probably readily acknowledge that these were not the right conditions to store or use any live-line tool. In fact, Chisholm remarked that these adverse storage conditions first led researchers to contemplate using excess humidity as one of the stress factors to induce similar types of failures in a laboratory setting.

A sample of 40 equivalent silicone insulators with dry arc distance of over one-meter were selected for this investigation. Apparently, creepage distance was not judged relevant to the research since contamination performance was not the issue of interest. Rather, the goal was to fail them, but only partially instead of fully, to determine how bad they could become while still able to be successfully changed out using live line techniques. The insulators were overstressed using a combination of humidity and overvoltage to the point of initiating partial tracking along the microscopic interface between the rubber weathersheds and the shaft. This phenomenon has been referred to as flashunder, to distinguish it from flashover that takes place externally and also from internal arcing that generally occurs within the material itself.

The time it took for moisture to diffuse into the silicone housing and to reach equilibrium with the humid environment was about a week, surprisingly quick and probably much faster than would be the case for equivalent insulators made of materials such as EPDM. This is explained mainly by the comparatively high rate at which moisture migrates through silicone rubber. Typical physical manifestation on many of the insulators that had failed due to flashunder were tiny pin holes in the silicone housing. These were apparently so small that they could not easily be seen by the naked eye even from a distance of only about one meter. This meant that simple visual inspection of such insulators would likely not prove sufficient to detect insulators which had failed or were in the process of failing due to the flashunder phenomenon.

Chisholm observed that the existence of these tiny holes in itself might not necessarily pose a problem for the insulator in all cases but would probably depend on environmental factors such as weather. Given the difficulty in identifying insulators with such damage visually, an important element of the research consisted of assessing, in the laboratory, different inspection methodologies in terms of their ability to monitor the flashunder failure process. “Because these types of failed insulators are difficult to detect by normal inspection procedures,” commented Chisholm, “we need to find better criteria.” He quickly ruled out ultraviolet inspection as providing practical help in this regard, either during daytime or at night, simply because the key trouble here is taking place in an area below the surface and the silicone housing blocks the UV. Similarly, he remarked that electromagnetic and stereo ultrasonic surveys also can not provide sufficiently detailed input. “Rather,” said Chisholm, “we found that thermal inspection is the best methodology in this type of situation.”

To illustrate the value of such an inspection, he produced two images generated by a Level 2 Thermographer on insulators that had been deliberately overstressed in the laboratory to induce flashunders. In the first image, the impact on heating can be seen as tracking is developing during the overstress procedure. In the second image, the path is completed and temperature literally doubles in the affected region. Said Chisholm “this is precisely what an impending failure looks like even if it is a somewhat extreme example. Basically, we are monitoring what is happening as the insulator is failing.”

Chisholm reported that of the 40 insulators which were involved in the overstress test, over half were somehow degraded yet still appeared normal and, as he put it, “ran cold” during thermographic testing. At the same time, he was quick to note that all of these would probably fail eventually. The key question was: would it be safe to replace them live? By way of contrast, Chisholm produced another image depicting how one of the 11 most damaged insulators in the test sample appeared thermographically under line voltage. “There is a clear safety message here,” he stated. “If you see this type of result with thermography, you should take an outage to replace the affected insulator.”

As part of the laboratory investigation, the silicone rubber housings of several of the deliberately failed insulators were peeled away to examine the nature of damage in the interfacial area below. In some instances, long tracking notches were clearly visible, although these did not run the entire length of the shaft, and appeared to closely match the temperature rise pattern observed from the thermal images.

Another element of the research involved conducting switching surge tests on damaged test insulators under the typical set-up associated with live line practices at the utility that sponsored this work. Chisholm stated that flashover resulting from the surge started initially along the exterior surface of the insulator but then quickly entered into the pin hole and track area below, leading to flashunder. “These become unsafe working conditions,” he noted, “and a stop work order would probably need to be issued if replacing these insulators. Basically, this would expose the worker to a risk they should not have to face.”

Chisholm displayed a chart that illustrated the test results of a live line work method involving a particular configuration of the insulator, hot stick and worker. He noted that these results will change from one working configuration to the next and says that utilities should therefore aim to standardize their work methods in order to benefit most from such testing. Given the maximum switching surge possible on the sponsor utility’s system, this chart helped identify when safe working conditions deteriorate into unsafe conditions, based on the cumulative probability of flashover. Chisholm looked at the data displayed and remarked that positive surges clearly have a more profound influence on failure probability than negative surges and this he noted is a well-established physical phenomenon. He also remarked that it is not fully clear why the extent of separation of safe and unsafe conditions for warm insulators (anything above ambient temperature) is greater than for cold insulators (ambient temperature). He speculated that diffusion of light-weight silicone oil back into damaged areas may play a role in recovery.

Reviewing these findings, Chisholm explained that thermographic inspection of overhead lines is usually a routine maintenance procedure at most utilities. If during such inspection personnel identify a composite insulator with an image that is “lit up” then it clearly should be replaced. He distinguished this, however, from what is a normal small amount of activity at the line end of an insulator in service. Said Chisholm, “it is the linear stripe of heat that is most characteristic of this flashunder phenomenon.”

The value of this type of past research lies mainly in assisting utilities to make the decision on whether to replace damaged composite insulators using live line methods or whether it is preferable to take the affected line out of service. “When the line crew shows up several days after the initial inspection reveals a problem,” explained Chisholm, “they should bring the thermographic equipment back to take current readings to help in this decision.” Chisholm conceded that one of the problems with relying on this inspection methodology to make the decision lay in the high price of each thermographic instrument. Another issue, he noted, is that an experienced operator is required to make the correct diagnosis of what is actually being seen. In this respect, he hoped an empirical Guide would relate temperature profile to extent of damage – along the lines of the classification system now used widely for hydrophobicity class. As far as solving this problem by requiring insulator manufacturers to conduct electrical testing of their insulators as they leave production, Chisholm remarked that this is not really a solution. “Testing must be done in the field in order to catch those insulators which have either been stored improperly or somehow damaged during handling.”