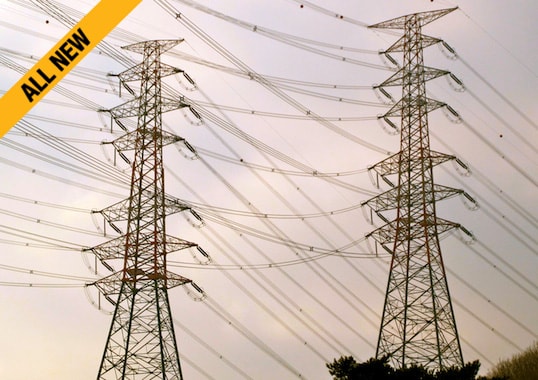 Unlike in certain industries where rapid technological change is the norm, the key goal for an electric power system is reliability. Since much of Korea’s transmission system operates at 345 kV, any system failure can have a ripple effect and become a great concern given that important local industries such as semiconductors, steel and chemicals all require a high quality, stable power supply.

Based on experience, some 80% of transmission system failures in Korea are caused by natural events such as lightning strikes. Ageing and failure of insulators is another key factor that can impact power supply. Therefore, proper scrutiny management of the insulator population is critical to prevent line failures. The Korea Electric Power Corp (KEPCO) conducts several monitoring programs to avoid problems with insulators – the leading cause of transmission line failures.

Porcelain accounts for about 99% of all insulators used by KEPCO. In the past, these were imported but domestic producers have been supplying 154 kV lines since the mid-1980s and have grown to more recently also supply 345 kV class 210 kN and 300 kN insulators and even 400 kN insulators for 765 kV lines. Since domestically produced insulators have had quality issues in the past, KEPCO introduced the power arc test (before it was internationally standardized) and also raised quality control test requirements by combining mechanical and electrical strength testing. As a result, there have been no reports of failures of domestically produced insulators since 1998 and this confirms that quality level has stabilized. In addition, local steep front of wave flashover test requirements have been revised in Dec. 2007 to reflect international standards and since Sept. 2011 have also been applied to HV suspension insulators. This is expected to further increase reliability of suspension insulators in service on Korea’s transmission system.

Table 1: Insulator Failures in Korea Due to Separation

To verify the condition of porcelain insulators, KEPCO diagnoses their integrity every 5 years using an electromagnetic faulty insulator detector. A detector, developed by KEPCO, is used to diagnose insulation resistance as well as electric field on 154 kV lines.

Since South Korea has the sea on three sides, insulators must also be washed regularly.

To test performance of insulators in coastal areas, KEPCO conducted research on Jeju Island where there is severe maritime pollution (contamination level: D). A total of 8 samples were removed from a 154 kV line running between Jeju Thermo Power Plant and Jocheon, with 4 insulators selected from 2 towers. These insulators had been manufactured abroad and were in service for about 25 years.

– Based on EPRI guidelines, the corrosion of caps on insulators taken from tower #4 was Grade C. Therefore, replacing them had to be considered.

– Among the insulators taken from tower #3, 2 were judged Grade C, meaning replacing them had to be considered, while 2 were Grade D, requiring immediate replacement.

– Since the Grade C insulators were installed in a severely contaminated area, corrosion was likely to continue. As such, it was decided that immediate replacement was necessary.

– In particular, insulators taken from towers #3 and #4 located further from the coast than towers #1 and #2 were categorized as Grade C and D. Based on this, immediate replacement of insulator strings on tower #4 was seen as required.

– Corona discharges occurred even in dry, bright weather, which might accelerate corrosion of insulator caps and pins, thereby resulting in risk of flashover during washing.

– Since live line washing might cause flashover, extreme care was deemed necessary. 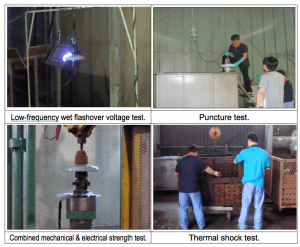 • Results of low-frequency wet flashover voltage testing did not satisfy the test criteria;

• 3 insulators broke during thermal shock testing and failed the test.

Analysis of Insulators Used for Many Years 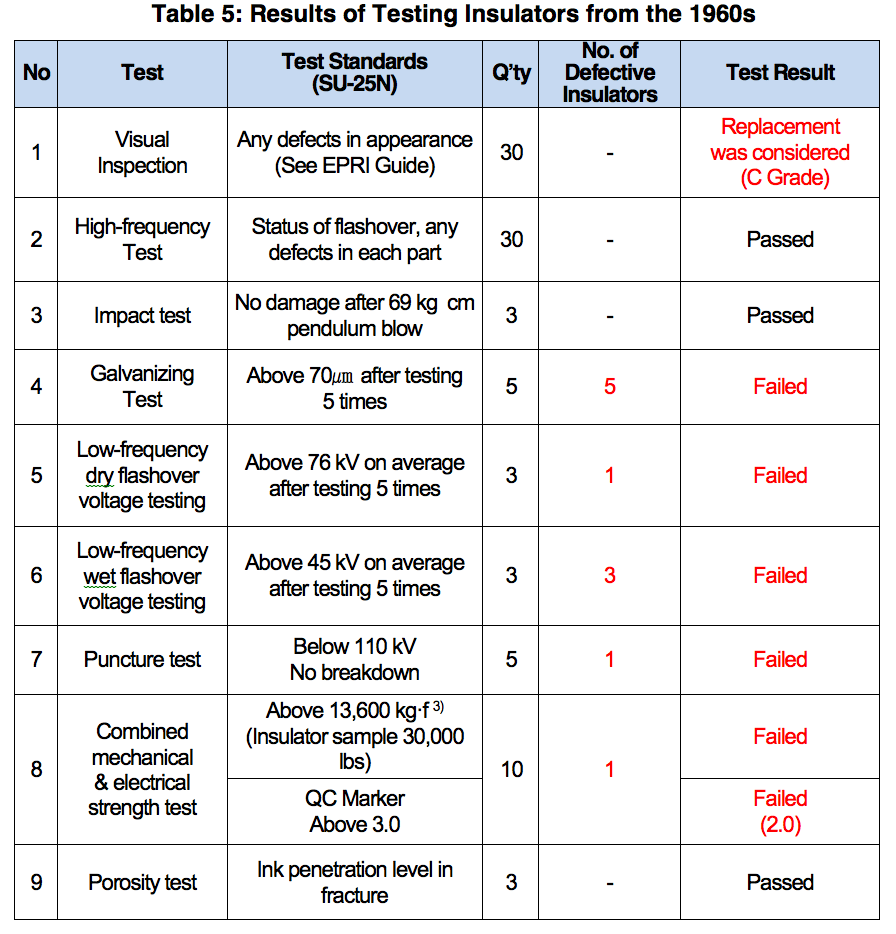 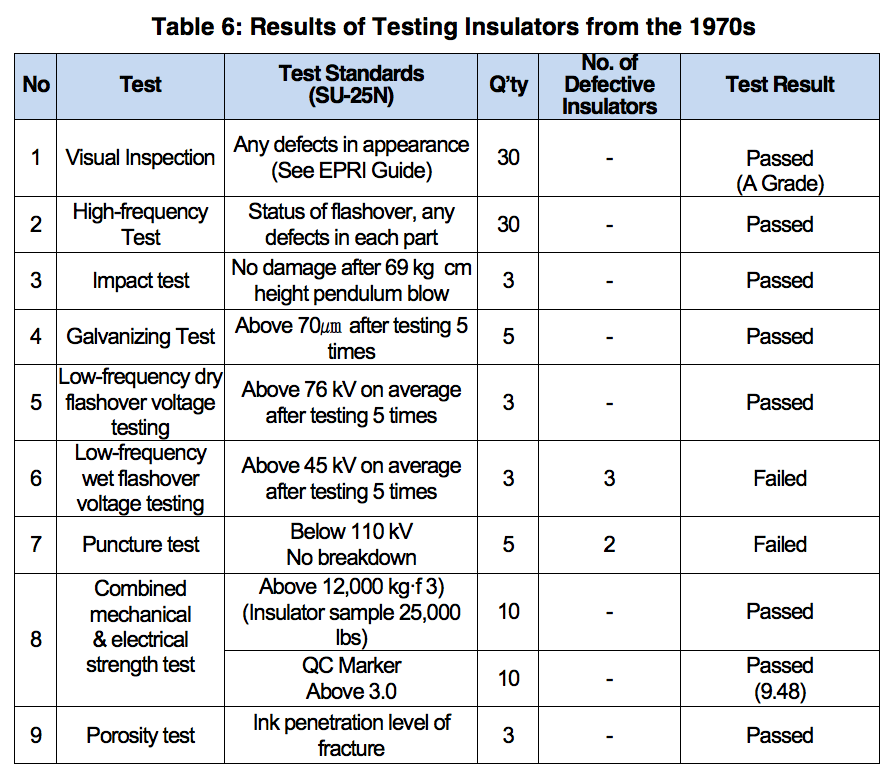 • The state of corrosion on insulator caps and pins was Grade C based on EPRI guidelines and galvanizing test results indicated a coating thickness defect due to corrosion.

• The results of combined mechanical & electrical strength testing indicated a QC marker of 2.0, failing the test. The final breakdown took the form of failure of the porcelain, indicating its vulnerability to ageing.

• Samples failed 4 tests due to electrical and mechanical degradation from temperature ageing and corrosion of caps & pins after long-term use.

• Corrosion on insulator caps and pins was Grade A (based on EPRI guidelines) and results of the galvanizing test indicated that coating thickness satisfied the baseline.

• Samples failed 2 tests due to degradation in electrical performance due to ageing after long-term use.

Considering test results on insulators used long-term from two lines (temperature ageing, corrosion, test failures and service years), degradation in their electrical and mechanical performance is expected to increase the probability of failures.

In total, 22% of the insulators used long-term in Korea are now more than 30 years old. In order to determine the proper time to replace these units, evaluation of their integrity is urgently needed. Moreover, since ageing processes can be accelerated in coastal areas, it may also be necessary to take appropriate measures even for insulators in service for less than 30 years. KEPCO is planning to perform a 2 to 3 year research project on the reliability and residual life of line insulators used long-term and to replace them on the basis of findings. The research project will cover the following:

1. Performance testing and analysis of insulators classified by their number of years in service, exposure to contamination and manufacturer;

2. Analysis of factors that contribute to ageing of insulators and the development of suitable life cycle evaluation methods;

3. Estimation of the remaining life of insulators with many years in service and establishing standards for their replacement.

Selection of Insulators with Respect to Icing

November 2, 2019 Comments Off on Implementing a Compact 400 kV Line