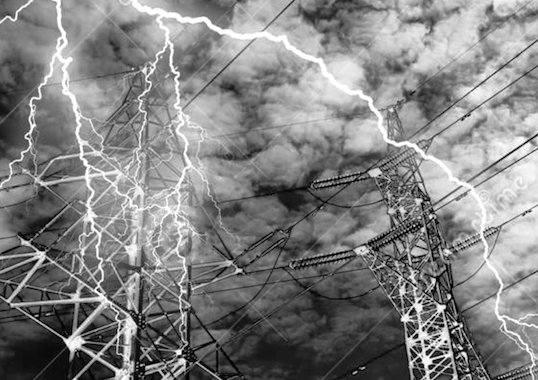 Many arresters failures are presumed to be due to lightning because they happen to occur during a storm. However, tear down for forensic analysis seldom reveals the tell tale asymmetry in the VI characteristic of MOV disks that always occurs during a high current surge. This asymmetry in disk current has been verified in nearly all know varistor formulations (see Fig. 1). In this case, damage was severe with 20% difference between peak positive current and peak negative current. This asymmetry is a permanent change to the MOV disk and is valuable evidence when searching for the root cause of arrester failure. Lack of this footprint in the vast majority of failures analyzed leads to a conclusion that high current lightning is typically not the cause of arrester failure.

There is however more rationale that guides understanding on this topic, i.e. an EPRI study completed in 1981 (Report EL1140) that undertook to quantify the magnitude of currents flowing through 2800 arresters, representing 32,808 arrester years of service and coming from 14 utilities. The study was prompted by high failure rates of distribution arresters in the 1970s which some thought was due to lightning surges. In 1981, the dominant arrester type in service was the gapped SiC unit and the gap was an excellent recorder of current flow through the device. Researchers painstakingly examined gap etchings and compared them to etchings created in the lab. Based on this, the graph in Fig. 2 was created. Similar studies were carried out in the 1930s and 40s and this study was an updated effort. A 1978 CIGRE paper by SC33 agreed with the EPRI data.

The data in Fig. 2 reveals that, for urban lines partially shielded by trees and where the ground flash density (GFD) is 5, the time between 100 kA surges is about 800 years. If in a GFD zone of 20, 100 kA through an arrester occurs about every 200 years. However, if an arrester is installed on exposed lines in a GFD region of 10 (e.g. as much of Florida) the arrester can expect to see a current of 100 kA about every 60 years.

Based on this data, surge arresters are not normally exposed to high lightning currents. Since all distribution arresters manufactured today are designed to withstand 100 kA 100% of the time, they are capable of handling the great percent of lightning strokes. These two sets of data drive the conclusion that arresters do not fail from high current lightning. While they may fail during lightning storms, it is not due to current lightning surges. Rather, if an arrester fails during a lighting surge, it is safe to assume it was on its way to a failure due to another reason or from a long TOV.

June 1, 2019 Comments Off on Developments in Designs, Materials & Manufacturing of Cable Accessories