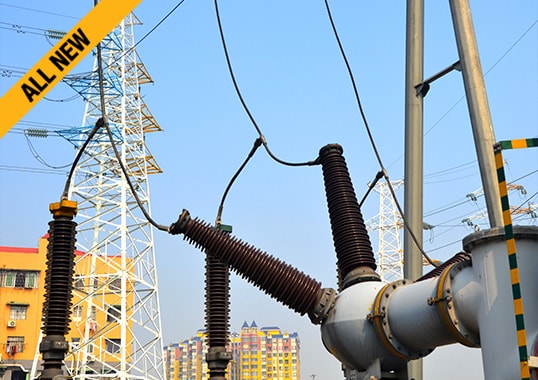 Surge arresters have been installed in electrical networks for decades to protect equipment against overvoltages caused by lightning or switching. While they typically show high reliability, their operating condition must still be monitored to indicate possible malfunction. The market offers devices that can analyze leakage currents and discharge processes and provide information about an arrester’s condition so that any defective unit can be replaced before key assets are placed at risk. At the same time, because technology in electronic devices is moving rapidly, further advances in surge arrester monitoring are now also possible. These include evaluation techniques that could result in a whole new generation of devices that are more accurate, more reliable and more power efficient while also being multifunctional and intelligent.

Though there are different methods to assess the condition of a metal oxide surge arrester, all usually involve evaluation of recorded leakage and impulse currents inside the unit. However, because this does not indicate every possible source of measurement error, it can result in a faulty assessment. Challenges are also posed when implementing a self-sufficient power supply as well as transmitting data gathered to the user. This edited article, based on an INMR WORLD CONGRESS paper by Philipp Raschke of Tridelta Meidensha in Germany, outlines new research on methods to better estimate, transfer and present leakage and impulse current data from metal oxide surge arresters.

The following steps should be considered to filter the third harmonic of the leakage current. The leakage current is converted to a linear voltage signal by applying a suitable method. The wave of the voltage signal is recorded by means of analog-digital-conversion by a microcontroller and transformed into its harmonic components. This occurs with the help of an FFT algorithm that converts the recorded signal time-efficient into a discrete Fourier spectrum. In order to avoid measurement errors, multiple full periods of signals must be recorded so that the Fourier transformation can be implemented. Here, a software-based zero-crossing detection has proven itself useful. The resulting spectrum contains two elementary values for continuous utilization:

To verify this measurement method, an experimental arrangement with a regulated high voltage transformer and a surge arrester was built. A prototype of the electronic measuring equipment and a calibrated power analyzer were integrated in the ground connection of the arrester. As seen in Fig. 1, the characteristic curve shows small errors in peak current and third harmonic content in terms of accurate values.

Measurement method B2 requires additional compensation of the harmonic components in leakage current caused by the harmonic content in network voltage. Without compensation, this can result in serious errors. Thus, the harmonic content of the network must also be estimated. In this case, a field probe records the electric field of the transmission network and converts this into a voltage signal. Using the microcontroller, the voltage signal wave is sampled through AD conversion and then transformed into its spectrum by means of FFT. Two continuous elementary values can be obtained using this process:

The ambient temperature of the arrester is calculated automatically for every leakage dataset. Measurement errors that occur through the fluctuation of the ambient temperature can be corrected. Correction values are specified for each arrester and are provided by the supplier for automatic correction, simply by choosing the actual arrester being used.

Generally speaking, in order to evaluate the condition of an arrester, the number of discharge incidents and amplitude measurements of the discharge current have to be taken into account. Occurring currents, voltage amplitudes and electric fields make high demand on electronic measuring devices. For this reason, the impulse current must be converted into a measurable voltage range by means of a specified method.

For the impulse measurement, a current transformer should be applied to convert the current impulse into voltage impulse. An additional filter makes it possible for the signal to be fitted into a suitable voltage signal, which can be measured by the microcontroller. Due to the fact that the appearance of a discharge process is a stochastic occurrence and the electronic device is expected to be power-efficient, the occurring voltage impulse is used to retrieve the microcontroller from its power saving mode into running mode. Current amplitude can be estimated within microseconds by means of AD-conversion in the microcontroller. A ‘surge counter function’ can be realized by adding the numbers of measured impulse currents.

In many cases, a suitable power supply for monitoring devices is not available at the installation site. Thus, a self-sufficient power supply is required for the monitoring device. Usually monitoring devices are equipped with solar cells that supply power throughout the day. In areas where the sun does not provide sufficient light, however, for example in extreme latitudes, stored solar energy is not sufficient for supplying devices continuously. Solar cells can also become contaminated, which leads to system failure. Batteries can be used to bridge gaps in power supply but have the disadvantage of needing to be replaced by the operator, usually at unknown intervals.

In order to overcome these problems, Tridelta Meidensha carried out research on a power supply system that uses leakage current of the surge arrester as the sole energy source. Extracting power from such a small number of microampere turned out to be problematic, but was finally achieved by using a micro-power harvester. A harvester is an electronic circuit that gathers very small energy quantities and converts them to a useful charge. In this case, a harvester capable of converting the leakage currents down to 250 µA was utilized so that the converted energy could be gradually loaded onto a capacitor. Harvesting power from leakage current requires a rectifier circuit.

The capacitor is fully charged after a few hours. The charging voltage is regulated by the power harvester and maintained at a level viable for the use of a microcontroller. Repeated full charging is not necessary due to the fact that the device has ultra-low current consumption despite its high performance level. This system continues to power the device even after network voltage has been disconnected. System function can therefore be maintained over many days with no battery change necessary. This is true even at extreme latitudes and for indoor applications as well.

In order to test the function of power supply, a special arrangement was built according to Fig. 4. The power harvester circuitry was switched to it with an output load similar to the consumption of the microcontroller. The charging process was tested with a capacitor with the capacity of 1F and with an arrester leakage current of 350 µA r.m.s. supplying the harvester. Fig. 5 illustrates the charging of the capacitor by means of the harvester over a period of several hours. The loading process was completed after 6 hours at 350 µA r.m.s. and with a load of 10 µA.

Monitoring devices for surge arresters have to be capable of recording leakage current data and impulse current data over a particular period of time (e.g. over a year). Because of this, measurement of leakage current is carried out at pre-determined intervals. The device transmits the data together with impulse current records. For later analysis of data, the monitoring device is able to provide an interface through which the stored data can be conveniently and freely transferred without endangering the user. To this end, suppliers of surge arrester monitoring systems offer transmission systems that are able to transfer data to operators or control rooms by wire. Clearly, a well-developed data structure is required. Other systems work with radio transmission, which enables wireless data reception. However, such a method is highly sensitive to the energy reserves of the monitoring device. Furthermore, many countries require radio authorization.

The aim of this research project was therefore to develop a data transmission system that enables convenient and reliable transfer of data without depleting the energy reserve and that allows for safe contact distance. The following concept has been developed with the state-of-the-art technology, depicted in Fig. 6:

The arrester monitoring device is in running order once the following arrester have been entered into the smartphone app:

The monitoring device is adjusted after placing the smartphone on the transponder with the chosen measuring interval as well as the current time. The serial number and position data are automatically sent from the app to the server. A new entry for the arrester is created in the data bank. After set-up, the monitoring device initiates periodic leakage current measurements, depending on the pre-set measurement intervals (e.g. once a day at 11:00). Whenever the estimated data is downloaded, the total of recorded leakage current entries as well as the estimated impulse currents since the previous reading are transferred to the smartphone.

Each record is marked with the date and time it was measured. Each record of leakage current contains a measured value of ambient temperature for compensation of temperature influence. An additional function allows input of current network voltage and makes it possible to compensate influences of network voltage fluctuation on measured leakage current value. The data that is transferred to the smartphone is automatically uploaded to the server and stored in an entry blank previously created for the arrester in the database. From this point on, uploaded data can be viewed, pending the user’s successful login.

There are several advantages to this method:

Presenting Arrester Data on the Web

Data that is transferred from the monitoring device to the server should be presented to the operator in a clear and readable manner. This can be achieved using a website that has access to the database and displays the information graphically (see concept shown in Fig. 7).

Users gain access to the website by entering login data that is matched with a prior user registration. In this way, multiple users can simultaneously download data from the monitoring device with their own smartphones and upload them to the server. The data is kept under this user account. Multiple users can also simultaneously access information in the database and on the website. Each arrester is identified by a unique ID that has been provided for every arrester in the database. The designation type is automatically available, pending the existence of the supplier’s serial number previously assigned when the monitoring device was set up. Correction factors for voltage and temperature fluctuation are also available. Using these, leakage current data can be automatically corrected.

There are several advantages to this method:

• individual organization of device data
• automatic correction of voltage and temperature fluctuation
• visibility of arrester data to all members with corresponding access level
• no installation of PC software operating system necessary
• ‘service on demand by the supplier’ – i.e. the immediate resolution of problems raised by any abnormal data.

Today’s technology makes it possible to develop advanced monitoring devices for surge arresters. The potential for application and improvement in this area is considerable. In the case of Tridelta Meidensha, the device powers itself with arrester leakage current and does not rely on any other energy sources. Initial operation and data exchange can take place on a smartphone. Arrester data can be gathered speedily and simply by establishing contact between a smartphone and a transponder. Simply entering an arrester’s serial number makes it possible to automatically store all future measurements made on the unit. Such data are immediately available online. Finally, a website gives every registered user access to the stored information, at any time or place.