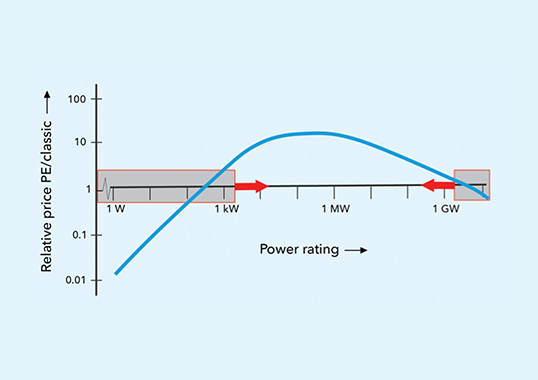 In the future, advanced power electronics will enhance and even replace traditional components due to their superior controllability. In the process, they offer the potential to ‘disrupt’ the type of electric power system we know today. Key issues that need to be addressed include: Why will power electronics going eventually dominate power systems; where will this domination take place and when will this occur? This recent contribution by DNV GL KEMA Laboratories answered these questions.

Advanced power electronics is basically a software-controlled compact configuration of fast solid-state switches capable of transforming electric energy with high efficiency in applications between power sources and loads. This enable fast, efficient steering and protection – also referred to as electronic power processing. Examples of application of advanced power electronics cover nine decades and over a vast range, from fractional watts to more than gigawatts of power.

Advanced power electronics is a modular technology that shows impressive improvement insofar as switching capabilities, volume power density, voltage as well as current capability and price. Switching capabilities are presently in the range of microseconds, volume power densities reach 30W/cm3, highest blocking voltages are around 10 kV and current handling capabilities are in the kA range for single devices. Price development over time has generally followed a curve where cost is reduced by from 15% to 20% with each successive doubling in production volume. Fig. 1 shows current areas of domination by advanced power electronics compared to ‘classic’ solutions.

Where Power Electronics Will Most Dominate

There is an obvious link to DC power system applications since all these make use of advanced power electronics, as shown in Fig. 2a. There is of course a sound technical argument for DC whenever bulk power needs to be transmitted with low losses over long distance to connect remote power resources to distant load centers. Indeed, this realm has now come to be dominated by ultra high voltage DC lines with voltages up to ±800 kV and with ±1100 kV already around the corner. At the other end of the spectrum are DC applications to supply power for public transport (e.g. railways) – still predominantly at the distribution equipment level, with voltages below 400 V. Examples include household appliances, battery charging systems, LED lighting, electric vehicles, residential PV systems and more. Moreover, almost all variable renewables are connected to the distribution grid through power electronics, e.g. inverters as in solar systems or having an internal power electronic controller as in wind turbines. The future will see development of ‘intra-grid’ power electronics applications such as automatic fuses, switches and transformers (see Fig. 2b).

It is important to note that digitalization is also driving the transformation of power systems. Together with cheap and reliable sensors, advanced power electronics serve as actuators enabling this transformational change. They are thereby helping create a safe, stable and reliable future power system, better able to deal with ever-increasing complexity.

When Power Electronics Will Come to Dominate

A transformational issue of such magnitude is difficult to predict. There is even the fundamental question of whether it is going to happen at all since it is impossible to state with certainty whether any vision will eventually become reality, even if efforts can be directed toward this end. Only if there are signs that the transformation is indeed taking place does the ‘when’ question become relevant. Often, there is over-optimism with respect to timing, e.g. “it will take at least ten years”. On the other hand, the effects of such a transformational technology on existing systems and on society tend to be grossly underestimated. A perfect example of this is the internet.

Two questions are relevant for companies active in the power sector. What will be the impact of any new technology and when will it have a significant effect on existing business. Answering such questions helps open the door to new business opportunities and also allows timely preparation for all the consequences. The model most suitable to answer the ‘when’ question is a combination of the learning curve and the logistic growth curve model, both shown in Fig. 3.

The learning curve predicts the cost/price of any technology or equipment over time, based on price P(O) in the reference year, production volume and learning curve coefficient (K). The logistic growth model has two parameters – the relative accumulated market volume n(O) in the reference year and the growth period (ΔT) needed for accumulated volume to grow from 10 to 90%. The practical value of using such a model is that estimates of cost reduction over time and speed of diffusion of the new technology can be determined. Of course, calculated numerical values are of limited practical value given that the model is a simplification of reality. The relevance, however, lies in the fact that the outcome is a good starting point for discussion. Based on a price development of K = 0.85 for advanced power electronics as well as a growth period of around 20 years (i.e. a slow uptake) and a relative accumulated market volume of 0.1%, the model predicts that it will take 32 years for advanced power electronics to achieve 50% penetration of future power systems.

How does the future power systems look? Certainly it will be far more exciting and dynamic than ever. Advanced power electronics will rule and allow for unprecedented changes in functionality and controllability of grid connection points (i.e. substations/nodes) of generation and load connection points, as in Fig. 4.

The functionality of future substations/nodes can not only be adjusted dynamically to changes in generation and load but also allow make possible optimized utilization of overhead lines and underground cables. Similarly with respect to function over time, e.g. inverters, transformers or breakers. Because of its modular build and ‘programmable function’, the future substation/node even allows for innovative combinations of functions, depending on grid operating conditions and/or contingencies. Advanced power electronics will forever change forever the wired world of power delivery we know today. A quotation from science fiction author, Arthur C. Clarke, summarizes this exciting future: “Any sufficiently advanced technology is indistinguishable from magic”.