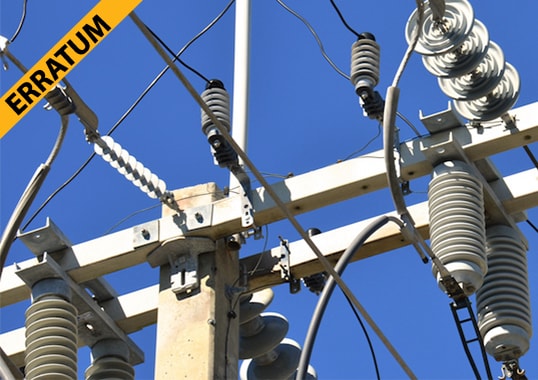 ERRATUM: The Qtr 2, 2016 issue of INMR is now on its way to subscribers but contains an error in the column Woodworth on Arresters. That error is corrected below, in red. INMR and Jon Woodworth regret any inconvenience caused by this error.

Distribution Class Arrester: DH, DM, DL Arresters intended for use on distribution systems (typically Us ≤ 52 kV) and intended primarily to protect components from lightning. Arrester classification is assigned based on the test series applied and maximum rating achieved during type tests.

Station Class Arrester: SH, SM, SL Arresters for use in substations to protect equipment from transient overvoltages and typically for, but not restricted to, use on systems of Us ≥ 72.5 kV. The classification is assigned based on the test series applied and maximum rating achieved during the type test.

Thermal Charge Transfer Rating, Qth: The charge, given in coulombs (C), that may be transferred through an arrester or arrester section in a thermal recovery test without causing a thermal runaway.

Thermal Energy Rating, Wth: The energy, given in kJ/kV of Ur, which may be dissipated by an arrester or arrester section in a thermal recovery test without causing a thermal runaway.

Repetitive Charge Transfer Rating, Qrs: The charge, given in coulombs (C), in the form of a single event that can be transferred at least 20 times (at time intervals that allow for cooling to ambient temperature) through an arrester without causing mechanical failure or unacceptable electrical degradation to the MO resistors.

Rationale Behind Change
To better understand distribution energy rating, it is useful to look at station class arrester energy rating. A major complication for years was that while Class 2 to Class 5 arresters came with energy ratings, there were no clear guidelines in the standard; moreover, rating methods varied from one manufacturer to the next. As a result, it was often a challenge to compare different brands of arresters. New changes introduced in Ed. 3.0, however, eliminate energy rating for station class arresters and replace this with charge transfer rating, in coulombs – effectively eliminating such problems when comparing arresters.

The new rating system is also more realistic and not biased towards arresters with poor protection characteristics. For example, using previous energy ratings, arresters with poorer discharge voltage (i.e. higher) could be classified with higher kJ/kV MCOV simply because they did indeed dissipate more energy for the same surge. But in doing so, they also offered less protection. The fundamental issue when it comes to energy rating is that it should not be a measure of the energy an arrester dissipates but rather of the charge (energy) that is transferred to earth through the arrester. In other words, what matters most in surge protection is not the actual energy dissipated by an arrester but rather the amount of current or charge it can handle during an event and not be damaged.