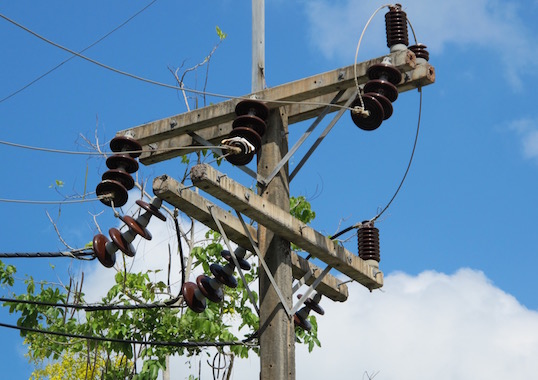 This picturesque, palm-filled scene from southern Thailand conveys a sense of nothing but serene, natural beauty. Yet, lurking hidden in this same image are some of the most important stresses that adversely impact overhead distribution – coastal pollution, high humidity, frequent lightning, intense solar radiation, abundant wildlife and, sadly, occasional vandalism as well. All these present serious challenges to operators of overhead distribution networks in terms of unplanned outages and potentially high maintenance costs.

The photos on the following pages provide evidence of the types of problems that can occur and also remark on some of the solutions applied by the system operator given the demanding service environment.

High levels of contamination on both upper and lower surfaces can quickly overwhelm porcelain disc insulators leading to pollution flashover, as clearly evident in these photos. Damage to glaze from successive flashovers will leave surfaces increasingly rough leading to increased concentrations of localized pollution deposition and even greater risk of future similar flashovers.

Porcelain insulators are brittle and can quickly fracture due to stone throwing or gunshot. The insulators in these images show typical outcomes of vandalism.

Biological contamination is a problem often associated only with polymeric insulation yet can occur with equal ease on porcelain surfaces in a hot, damp environment. Mold growth can reduce effectiveness of external insulation due to build up of persistent wetting. Another issue in a tropical setting is onset of corrosion and possible damage to cement work from leakage current collecting here whenever porcelain is wetted by dew or rain.

Deterioration due to high UV is another potential problem. Cutouts above show evidence that fuse tubes are well on the way to failure caused by long-term exposure to strong sun. Initially, the paint starts to disappear followed by the polyester layer itself. If these cutouts had to operate, they could possibly explode the tube and need to be replaced – not a serious problem if there is a backup tube. If not, there could be a long-term outage.

The limited angle of glaze damage and its presence on all sheds is likely the result of impulse flashover and resulting power arcs. Since there is no bonding to the insulator bases, leakage current flows through the concrete, which typically has low resistivity. However, the framing looks as if it was adapted from a wood construction and there is no impulse strength in the concrete crossarm. Note the loss of glaze on bottom shed of porcelain in photo at bottom, making it even more vulnerable to contamination build up.

Also, these post insulators seem to be dimensioned much smaller in terms of dry arc leakage distance than the four accompanying standard discs. This should normally be reversed since post leakage should be higher than series discs in contaminated areas such as this.

Wildlife, such as monkeys or large birds, are an issue affecting distribution lines in most tropical countries and remedial measures often include specialized protectors over terminals of, e.g. arresters. However, these are not always effectively installed. For example, the wildlife protector on the arrester in this photo is virtually worthless against larger animals and birds. A monkey or similar animal that comes close to this top lead will not survive if they are standing on earth. Similarly, animal guard covers have been installed over a nearby transformer to prevent an animal fault across the terminals but the rod gaps (which probably came already equipped on the transformer) are not protected. To be effective, the top terminals of these rod gaps should have insulation as thick as on the high side phase conductors.

Note: On porcelain bushing at left there is evidence on the second shed from the bottom of a so-called ‘glaze worm’ – a signature of long-term damage from minor arcing (as opposed to flashover).

This photo shows that both 30 kV arresters have failed and operated their disconnectors. The top arrester also has its hot lead cut away so that it is completely isolated from the system. The bottom arrester, however, still has the high voltage applied at the top and therefore also at the bottom since the disconnector is open.

Note: Fuse tubes on cutouts show one with some paint still on and one with most paint already gone.

Silicone sheds on this 30 kV polymeric arrester that protects the transformer shown above still maintain good hydrophobicity, even in a demanding location right beside the sea. There is no evidence of mold and the discoloration may rather have been due to an external flashover.

Note creepage distance of insulating hanger, which is the minimum that would pass IEC or IEEE standards.

Hydrophobicity of the top shed of these IEC Class 2 or 3 arresters protecting cable connected on the other side of structure is impressive.

Note: All have insulated bases with ground leads directed down the structure to probably 1 to 3 condition monitors. Since they are protecting underground cable, power system operator has specified a higher quality arrester for this application and one that lends itself to condition monitoring as well.

December 8, 2018 Comments Off on General Information on the 2019 INMR WORLD CONGRESS