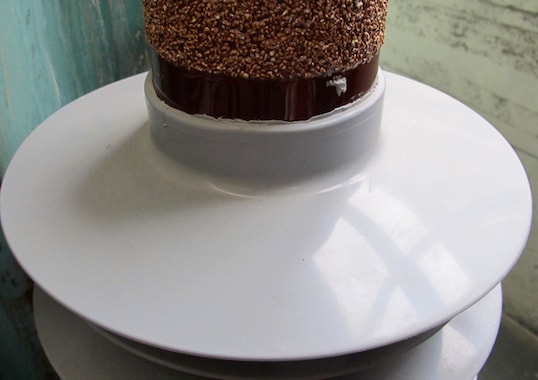 In the past, the main options for support insulators at air-insulated HVAC substations were either solid core porcelain or composite insulators up to 245 kV. In addition, RTV coatings have at times been applied to solid core porcelain post insulators to improve their pollution performance. New developments have recently been made when it comes to gas or foam-filled hollow core composite insulators as well as larger core diameters on solid core composite insulators. Nevertheless, the requirements for EHV and UHV AC installations in terms of length, mechanical strength, permissible deflection, creepage distance, shed profile and pollution performance still present a challenge for all existing insulator technologies. Realizing the need for high strength as well as low deflection under loads for applications such as earthing switches, disconnectors, reactors and busbar supports, a program was launched to develop hybrid post insulators. The basic concept was to combine the known service experience reported for solid core porcelain posts with the proven pollution performance of insulators with silicone rubber housings. The challenge was to provide a reliable and cost-effective solution that combines the mechanical advantages of solid porcelain and the electrical advantages of silicone housings for high pollution requirements. Selected design tests as well as electrical and mechanical type tests were conducted according to relevant IEC standards for composite and ceramic insulators. In addition, a long-term field test was set-up to establish more confidence in the concept. This installation was energized at 145 kV AC in May 2012 at the Koeberg Insulator Pollution Test Station (KIPTS) in South Africa and has provided final qualification for the new product. In addition, 420 kV AC hybrid posts were chosen for trial installations across several applications. This INMR article from 2015, contributed by Gustav Gödel, summarized the experience developing, designing, manufacturing, testing and applying post insulators made of ceramic and silicone materials, i.e. hybrid post insulators having a ceramic solid core.

The aim of this project was to establish hybrid station post insulators as an alternative for power engineers across a range of support functions in AC high voltage apparatus as well as at HVAC substations. The porcelain solid core post insulator with external metal fittings is the most widely used type of station post insulator. Standard values for electrical and mechanical characteristics and dimensions – essential for the inter-changeability of these post insulators – are provided in IEC 60273 and ANSI C29.9. The ceramic solid core design provides advantages in terms of bending strength and deflection under bending load, and also for torsion and compression loads. In fact, this insulator type is used for all kinds of applications where these properties are required. Specific HV apparatus such as disconnectors and earthing switches are especially sensitive to deflection under load. Also busbar support applications need high mechanical strength and stiffness to cover short circuit demands as well as to carry wind loads without deflection. Support posts under reactors, filters and in capacitor banks face further compression loads.

Many improvements in production technology and design optimization have been realized over the past several decades and alternative solutions have been developed in terms of pollution resistance, size and weight. These have included:

All the above solutions have their relative merits and drawbacks. The main differences are highlighted in Table 1.

Various developments for larger core diameters on solid core composite support insulators have been made but are limited by the rod production process. In practice, solid core composite insulators are applied mainly at system voltages up to 220 kV since they cannot achieve the required cantilever strength and low deflection of porcelain solid core posts. Another approach has been hollow core composite posts, with gas or foam filling. Besides the complex issues of the behaviour of the filler, this solution also demands very large core diameters to reach a deflection under bending load similar to that provided by a solid core porcelain insulator.

• Selection of appropriate housing material;
• Forming an electrically stable interfacial seal between housing and glazed ceramic material;
• Transport, storage and installation to be handled as for composite insulators (refer to CIGRE Technical Brochure 184).

IEC 60168: “Tests on indoor and outdoor post insulators of ceramic material or glass for systems      with nominal voltages greater than 1000 V”

IEC 60273: “Characteristics of indoor and outdoor post insulators of systems with nominal voltages greater than 1000 V”

IEC 60168, IEC 60273, ANSI C29.1 and ANSI C29.9 together cover the full range of porcelain solid core post insulators while IEC 62231 is the relevant test standard for composite post applications. It exists since 2006 but it is still limited to a nominal voltage up to 245 kV. As discussed, the hybrid solution combines the mechanical properties of porcelain with the pollution performance of a hydrophobic housing. Working Group (WG) 12 of IEC TC 36, under project leader Jens Seifert, has worked out a technical specification for hybrid insulators, which will be IEC/TS 62896 – Hybrid Insulators for AC and DC High-Voltage applications – definitions, test methods and acceptance criteria. The final document is approved to be published and will offer guidance on how to specify hybrid insulators for relevant applications.

The porcelain core is made of high-strength aluminum oxide porcelain, C130, acc. to IEC6072-3, manufactured using isostatic technology to allow shorter manufacturing times. The isostatic process provides better dimensional control for tight tolerances and a more consistent product compared to the conventional wet process. After turning, glazing and firing, the ceramic rod is cut to the length required and metal fittings are cemented on.

The silicone rubber housing is made of high temperature vulcanizing (HTV) silicone rubber containing a high level of alumina trihydrate (ATH) to address the fact that silicones can temporarily lose hydrophobicity under continuous severe pollution. The high temperature, high pressure, multi-shot injection moulding process guarantees that the rubber housing is fully bonded onto and adheres to the porcelain core, the end fitting and the cement.

The insulator column usually consists of 2 sections – each about half the total height. Since the post is for upright applications, a tapered design was selected, offering a larger core diameter on the bottom section to meet the higher bending moment requirement. The silicone rubber housing completely covers the ceramic core and is fully bonded to the metal fittings. Pitch circle diameters and hole patterns are chosen according to customer specification and IEC 60273. A corona ring is applied on the top to fulfil required RIV characteristics and also to control electric field along the insulator surface.

Design tests verify the suitability of the design, materials and method of manufacturing (technology). Since there are no specific standards for hybrid insulators, IEC 61952 and IEC 62217 were used. The following tests were considered as relevant for the hybrid post design:

Tests on interfaces and connections of end fittings

Tests on shed and housing material

All these tests were passed successfully.

The ceramic core of a hybrid post bears the mechanical load transmitted to the core by the end fittings. Therefore, since there is no existing hybrid insulator standard, testing of the mechanical properties was performed in accordance with IEC 60168. The insulator passed all mechanical type tests, including the porosity test. The insulator broke at bending force 14.4 kN, the deflection under bending load characteristic was recorded and showed satisfactory results.

It was decided to test the standard electric properties in accordance with IEC 60168 and the insulator column passed all electrical type tests. For the wet switching impulse withstand, a specific value of U10=1406 kV was recorded.

In parallel, a natural ageing and pollution performance test for outdoor insulators was conducted the Koeberg Insulator Pollution Test Station (KIPTS) for one year. 145 kV hybrid post insulator specimens (BIL 550 kV and BIL 650 kV) were installed and tested from May 1, 2012 until April 30, 2013. The test was conducted on two 145 kV AC insulator types and test results were satisfactory with the results expected.

The aim of the project was extension of an existing 420 kV substation with hybrid post insulators. The substation, located near a highway salted regularly during winter, is equipped with ceramic post insulators, C10- 1550, having creepage distance of 13,020 mm for the pollution class, which is ‘e’, i.e. very heavy according to IEC/TS 60815-2. It was decided to keep the same creepage distance for the hybrid posts as on pre-existing porcelain posts. Several such insulators, C10-1550 and C10-1550 underhung, were installed in an upright position (see Fig. 4) for busbar support and underhung on the incoming gantry tower. All were equipped with field grading rings and the installation has performed satisfactorily since 2013.

The aim of this project was replacing existing ceramic posts having RTV coatings with hybrid post insulators. The substation is located in a harsh pollution environment, near the seacoast. Therefore, the station is equipped with RTV-coated ceramic post insulators, C8 – 1550, with creepage distance of 13,680 mm. For the replacements, it was important to guarantee the same mechanical performance while maintaining the specified post height and connecting details on top and bottom. Several hybrid post insulators, C8-1550, were installed in an upright position for busbar supports and reactor supports (see Fig. 5). The installation was put in place in 2013 and has performed satisfactorily.

The aim of this project was to equip a certain section with hybrid post insulators and several were installed (model C15.5-1675). The installation was made in an upright position for a busbar support and earthing switch.

Design tests as well as electrical and mechanical type tests were conducted according to the existing composite and porcelain post standards and were passed. Long-term natural ageing and pollution performance testing was also conducted.

A hybrid insulator test standard does not yet exist. In the meantime, the first draft: “IEC/TS 62896 Hybrid Insulators for AC and DC High-Voltage applications – definitions, test methods and acceptance criteria” has been approved for publishing. This new standard will help industry better specify hybrid insulators. Several installations were made at 420 kV AC substations operating in different environmental conditions and have performed well.