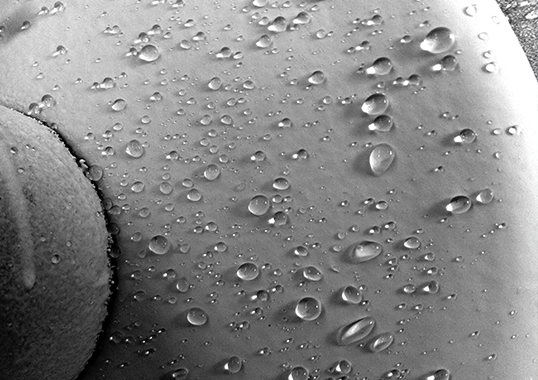 When there are two alternative technologies that each somehow complement the weakness of the other, combining them would seem the logical solution. This applies to traditional ceramic insulators and silicone rubber material. Porcelain and glass insulators (both classified as ‘ceramic’ since each is based on silica) suffer from the significant weakness of easy wettability. This results in relatively poor contamination performance. Silicone composite insulators, on the other hand, have excellent contamination behavior but, in my view, carry a greater risk of permanent electrical or mechanical failure. Combining the two materials is therefore often the perfect solution. Indeed the application of RTV silicone coatings to porcelain at substations first began more than 25 years ago and has had good success. So why has this practice not become more widespread, especially for overhead line insulators. One major obstacle, perhaps, has been procurement cost since coated insulators are significantly more expensive than either ceramic or composite insulators. If this cost issue could somehow be resolved, could such insulators become a more common choice for users? Here are the key issues at work.

Going back to the 1980s, RTV coatings were applied to porcelain insulators to solve contamination flashover problems at AC and DC substations. Since they were often installed in the field, conditions could not always be controlled and there were problems such as wastage, overspray, poor surface preparation, uneven coating thickness and inadequate adhesion.

Yet in spite of such problems, service experience overall was regarded as a great success since the former need for periodic washing was basically eliminated while flashover problems were controlled. For example, flashovers of HVDC wall bushings due to non-uniform wetting (since the converter station wall was preventing the bushing from being either fully dry or completely wet during rainfall) were eliminated. While perhaps this result could also have been achieved by greases and oils, where RTV coatings really stand out is their continued long-term hydrophobicity, despite the accumulated contamination.

The popularity of coatings naturally increased and several publications and guides appeared on how to best use them. Recently, the stage has been reached where coating porcelain or glass insulators is increasingly performed in the factory or indoors just before installation. In fact, an IEEE task force for pre-coated insulators has prepared an updated paper on this technology. What might help convince more users to adopt this solution is data that can better quantify the effectiveness of the coating over time. For example, it can be expected that, for any given system voltage, RTV coated insulators will withstand higher levels of contamination than uncoated insulators. Demonstrating this in the laboratory when the coating is new is fairly easy. But what is needed is testing with insulators where the coating has been deliberately damaged to simulate improper installation, storage or handling. Even in such cases, however, the contamination performance with a deteriorated coating would likely still be better than for uncoated since at least a portion of the insulator would remain hydrophobic.

The aspect of simulating coating performance after years in service is more complicated. One could perhaps employ tricks such as using wetting agents during application of pollution in order to reduce hydrophobicity or performing the test on artificially contaminated insulators without allowing time for hydrophobicity to recover. Repeated measurements of flashover/withstand on a coated insulator would alter hydrophobicity unevenly along the insulator and lower flashover/withstand voltage with each successive trial. This might be one way to simulate coating condition after years of service. But which flashover value is most relevant and how to assess residual service life from such tests are issues that would keep researchers busy.

From a user perspective, one of the key questions is: when should coated insulators be cleaned or re-coated. One possible such indicator in the case of substation insulation is audible noise. When a coating is new, noise due to corona is barely perceptible. As the coating becomes contaminated and hydrophobicity diminishes, one can expect an increase in surface discharge activity and therefore noise. But since this parameter is hard to quantify, it is still difficult to establish reliable criteria for maintaining coated insulators.

There are certain environments that are optimal for each different insulator technology. Suitably dimensioned insulators of all types will perform well in locations with light to moderate contamination. For contaminated locations that are relatively dry, silicone insulators are most advantageous due to their inherent surface hydrophobicity. RTV coated porcelain/glass insulators, by contrast, would better be suited for locations with moderate to high contamination combined with frequent wetting due to mist, rain or fog. In such locations, loss of hydrophobicity from repeated discharges could degrade the silicone housing, thereby exposing the composite insulator to permanent failure. Still, such a simplistic categorization does not resolve the issue since the terms ‘relatively dry’ and ‘frequent wetting’ are qualitative, at best. Contamination levels are generally characterized mainly in terms of ESDD and NSDD. Adding some quantification of the relative wetness and/or dryness of the service environment could only aid the insulator industry.

One final point. While pre-coating insulators is possible either during construction or after an extended outage, even these insulators will have to be re-coated in the field at least once to ensure a useful life of 30 or more years. Life cycle costs of each of the alternative solutions would then need to be compared to arrive at the best choice.

May 25, 2019 Comments Off on Expanding Grid in Pakistan Confronts Challenges of Pollution, Icing & Lightning (Part 2 of 2)