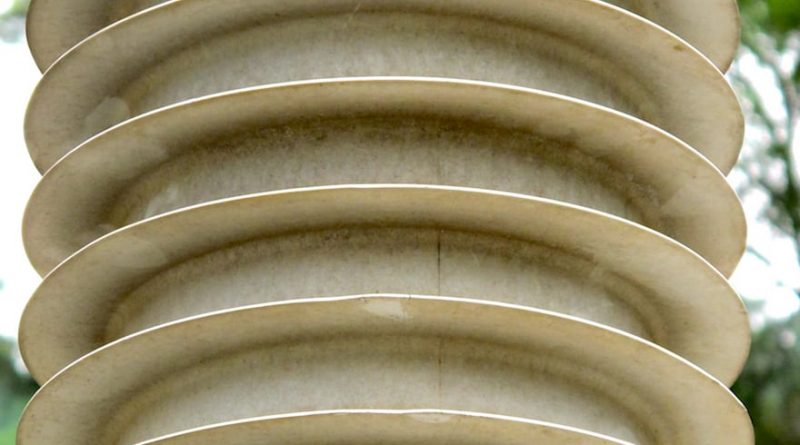 The superior pollution performance of silicone rubber insulators is due mainly to their hydrophobicity transfer property. This not only prevents the formation of a continuous film of water but also slows down the entire salt dissolving process such that only a portion of the salts in the pollution layer actually dissolve in the water. This INMR article from 2011, contributed by Prof. Liang Xidong as well as Zhang Yibo of the State Key Laboratory of Power Systems at Tsinghua University in Beijing proposed utilizing a different concept – Effective Equivalent Salt Deposit Density (EESDD) – to recognize this behavior and to more accurately characterize the amount of dissolved salt really present on the wetted surface of a silicone insulator.

It is well established that silicone rubber composite insulators (SR insulators) offer superior pollution performance in contaminated areas. These insulators usually have higher flashover strength than ceramic and glass insulators of the same creepage distance due mainly to surface hydrophobicity as well as profile factors. For SR insulators, hydrophobicity will transfer to the pollution layer by means of migration of low molecular weight (LMW) polymeric chains from within the silicone bulk material. Thus, both the surface and the bulk remain hydrophobic. This, in turn, may have significant impact on the salt dissolution process, which clearly warrants research to evaluate the impact of actual effective salt dissolution on the flashover process.

However, in actual fact, rain and fog during service conditions are unable to wash away all the pollution and dissolve out all the salt from the surface. This testing process is clearly too severe for SR insulators. A new methodology in regard to effective ESDD should therefore be developed. This article summarizes research on the actual dissolved salt of the pollution and proposes the new concept of EESDD as well as its appropriate test methodology.

Impact on the Flashover Process

In the field, because ceramic insulators are hydrophilic, surface pollution can be considered fully wetted, forming a continuous conductive film of water. In the case of SR insulators, however, their hydrophobic surface prevents formation of such a film and thus provides superior electrical strength. But understanding this only looks at surface hydrophobicity and not at the entire pollution layer. Research has shown that, under UV and temperature effects, LMW species from within the silicone bulk will migrate to the surface with the help of silica and other non-soluble ingredients. After this, a hydrophobic cover will essentially form around the salt, such that it becomes difficult for moisture to get inside the pollution layer. Therefore, the total amount and rate of salt dissolution will decrease and the conductivity of water on the surface will be lower. Even if the surface becomes fully wetted by rain or fog, the hydrophobic cover will slow down the dissolution rate.

Another key issue in this regard concerns the different impact on SR insulators of wetting from weather. When precipitation intensity is low, the surface of these insulators becomes wet only gradually meaning surface salts cannot be completely dissolved out. When precipitation rate is high, pollution will drain quickly away from the insulator and salt in the hydrophobic pollution layer will not have time to dissolve completely in the water. Therefore, when the SR insulator experiences flashover, only a portion of the salt in the pollution is actually dissolved in the water, i.e. not all the salt is “effective” in the flashover process.

The present method for ESDD measurement on SR insulators follows the same process used for ceramic insulators. According to this methodology, the pollution is washed out and dissolved in 300 ml water in order to get all the pollution without salt loss or residue.

Based on operating experience as well as laboratory tests, a different concept was proposed to characterize the actual and effective amount of salt involved in the process of pollution flashover of SR insulators.

According to the definition of ESDD in IEC 60815, the effective equivalent salt deposit density would be calculated as follows:

where S is the equivalent NaCl weight of measured dissolved salt (in mg) and A0 is the whole test area.

According to its definition, a new measurement method is proposed to obtain EESDD. This method reflects the actual dissolution process and is easily conducted in the field or in the laboratory.

The procedure to obtain both the wettability class (WC value) and the EESDD involves a series of specific steps:

1. Prepare the test equipment and samples, i.e. obtain A0,
2. Spray the sample to obtain the WC value and then collect all the droplets from the test sample into a beaker,
3. Spray the sample an additional 25 times and collect all the droplets from the test sample into the same beaker,
4. Dilute the water in the beaker to 100 ml and measure the conductivity. Then calculate the salt weight, S (in mg).
5. Calculate EESDD = S / A0
6. (If required to measure NSDD), follow the IEC standard method to obtain NSDD1 of the 100 ml and NSDDR of residue sample pollution, i.e. NSDD = NSDD1 + NSDDR.
7. (If required to obtain ESDD) obtain the ESDDR of the residue sample pollution (following the IEC standard method). Then, ESDD = EESDD + ESDDR.

A site pollution survey was conducted in China from 1999 to 2000 involving a total of 50 SR insulators that were selected and tested. These insulators were from different manufacturers and operated in different types of service environments including urban, marine, power plants, cement plants, chemical plants, brick factories, farms, etc. The EESDD of SR insulators was tested using the method described above and both EESDD and ESDD of the different shed surfaces were obtained. Fig. 2 is the measurement result of one particular SR insulator that operated in a rural farm environment for 1½ years under 110 kV AC. There were 14 sheds on the insulator having diameters of 120/80 mm (shed numbers from 1 through 14 were counted from the energized end). Wettability class (WC) test results showed that hydrophobicity generally became better from the high voltage end to the ground end, with values from WC5 to WC2 for upper surfaces of sheds and WC7 to WC5 for the lower surfaces.

Comparing Figs. 1 and 2, the test results demonstrate considerable consistency. EESDD actually exists and is measurable, i.e. both the concept and the test method are valid and proven.

1. This article analyzes the impact of hydrophobicity transfer on the salt dissolution process, which makes the flashover process of ceramic insulators and SR insulators quite different. Present site mapping based on ceramic pollution data is therefore clearly not optimized for utilizing SR insulator configurations.
2. The dissolution of salt from the pollution layer is slowed by the insulator’s hydrophobicity transfer property such that only a portion of the salt in the pollution layer actually dissolves out. This results in SR insulators having lower wet pollution conductivity than ceramic insulators
3. A new concept, referred to as EESDD, has been proposed to characterize the effective ESDD of SR insulators. It is an actual and measureable value as verified by test results.
4. A methodology for measuring EESDD is proposed and was applied to a test of SR insulators in service. This method requires carrying out the WC test first and then spraying the surface several times more. All the droplets on sample surface during these steps are collected in a beaker before being diluted in 100 ml of water. The equivalent salt, S, could then be calculated according to the conductivity of the 100 ml solution. The corresponding EESDD is obtained by simple division, S/A0.